My college roommates loved nothing more than transforming academics into entertainment. Sophomore year, several of them were enrolled in Political Parties and Elections, a lecture course taught by a visiting professor. One day mid-semester, it was announced that former Speaker of the House of Representatives Jim Wright was on campus and planned to visit the class. Naturally, my roommate Chris Douvos decided to impersonate a Secret Service agent. So he decked himself out in his Secret Service best – trench coat, dark aviator sunglasses, and a conspicuous earpiece – and, as students filtered in, wandered around the lecture hall giving interested and vaguely menacing stares from behind his sunglasses. Just as the class was scheduled to start, but with no sign of the professor or the former Speaker, Douvos bounded up on the stage and waited a moment until the room got quiet.

“As you all know, Speaker Wright will be attending this class today. We are expecting the Speaker in… [Douvos checks his earpiece]… just a few moments. Are there any questions?”

[Student in the front row raises his hand] “Is there anything we need to do while the Speaker is here?”

“Yes… [Douvos checks his earpiece]… No sudden movements or jerking motions. Thank you.” [Jumps off the stage and walks out of the class.]

[Students murmuring, including several audible comments to the effect of “These guys don’t mess around.”]

Hopefully impersonating a Secret Service agent is not a crime (or if so, one with a short statute of limitations). But can we really blame Douvos? After all, a full lecture hall is an audience primed for entertainment. And many faculty appear to be following Douvos’s lead. The 2017 Educational Review article “Let Me Entertain You: the Ambivalent Role of University Lecturers as Educators and Performers” indicates that TED Talk culture has come to campus. The study cites examples where faculty feel their role in lecturing is verging on entertainment. Faculty report increased sensitivity to whether students enjoyed lectures or “had a good time.” Several faculty note “growing student demands for more entertaining (rather than, say, stimulating or intellectually challenging) lessons.” According to one faculty member quoted by the researchers: “Teaching nowadays is very much like entertainment. You need to keep students entertained so you really need to be a kind of Instagram in front of them… to attract attention.”

This article reminds me of the cloying term “edutainment,” and also a recent New York Times op-ed, Let Children Get Bored Again, in which Times Book Review editor Pamela Paul argues “it isn’t actually the teacher’s job to entertain as well as educate. Life isn’t meant to be an endless parade of amusements.” In succumbing to student demands to be entertained, colleges are reflecting the parents whose tuition dollars they’re desperately trying to attract. As Paul says: “Only a few short decades ago, during the lost age of underparenting, grown-ups thought a certain amount of boredom was appropriate… Nowadays, subjecting a child to such inactivity is viewed as a dereliction of parental duty.”

Nothing makes this clearer than videogames. As Paul notes, “When not being uberparented, kids today are left to their own devices — their own digital devices, that is. Parents preparing for a long car ride or airplane trip are like Army officers plotting a complicated land maneuver…. Is this an O.K. time to let the kids play Fortnite until their brains melt into the back seat?”

I’m generally enthusiastic about things digital when it comes to closing the skills gap. But I’m deeply skeptical of how videogames are creeping into American higher education. It began in the 1990s with videogame design programs. But this decade, we’re seeing inroads of videogame play, or “eSports.” 128 colleges and universities have now joined the National Association of College eSports (NACE). According to Eduventures, 47% of schools are running “eSports” programs as student activities or clubs. Another 40% organize them through athletic departments (which – given the sedentary nature of “eSports” – is probably an organizational oxymoron), and many are pouring money into new “eSports arenas.” But, as Eduventures notes, “the remainder put their programs elsewhere, such as in academic departments.”

Syracuse is already offering an “eSports” course in partnership with the streaming service Twitch. UC Irvine, UT Arlington, Ohio State and Shenandoah University are planning to offer “eSports” degrees. Shenandoah’s program ostensibly focuses on “how to run and plan eSports events,” but as Inside Higher Education pointed out, it originated as an academic program for gamers. Reportedly, the President of Shenandoah was skeptical. “But the faculty convinced her that the degree would essentially be a sibling to sports management and marketing programs, which the university already offered.”

She was probably also convinced that the program would attract dozens, if not hundreds of additional students. Shenandoah “eSports” director says he thinks it will be an “enrollment driver.” New England College agrees; it has “pulled in fledgling players from Texas and Canada and gotten them to commit to New England – 12 total students have put down deposits for the college because of their interest in eSports… The sticker price at New England is about $36,750 per year, not counting other fees or room and board.”

“eSports” apologists point to employment as a rationale. After all, if higher education has shifted from the inspirational to the transactional (with the primary transaction being a good first job), why not give customers what they want: entertaining classes and programs that lead to employment. But as Eduventures reports, of 40 million jobs posted last year in the U.S., only 1,400 made any mention of “eSports.” Moreover, if you happen to be one of the few people running an eSports business, even given the technical and industry knowledge a new “eSports” graduate may attain, do you really want to hire a candidate who made his or her postsecondary education matriculation decision based on a desire to play videogames?

Ironically, “eSports” – whether as academic programs, varsity “sports,” or clubs – probably make students less employable. As Pamela Paul noted, “the ability to handle boredom… is correlated with the ability to focus and self-regulate… teaching children to endure boredom rather than ratcheting up the entertainment will prepare them for a more realistic future… to spend an entire day answering Friday’s leftover e-mail… [or]… to check spreadsheets.” Employers want workers who will show up on time and focus on serving customers rather than staring at their phones. They need employees who are able to get along with colleagues, and take direction from supervisors: a particular challenge for headstrong Millennials. It’s hard to imagine that “eSports” help their cause. (More irony: the acronym selected by the eSports organization – NACE – is the same as higher education’s career services organization: the National Association of Colleges and Employers. Here’s hoping old NACE doesn’t play nice with new NACE.)

When it comes to entertainment’s nemesis – boredom – I figure there’s a Laffer Curve for student outcomes. 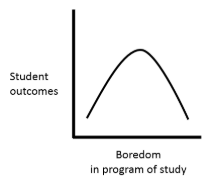 The downward slope on the right is the world of disengaged faculty, weed-out courses, and non-English-speaking graduate teaching assistants. None of that is desirable. But in the service of giving students what we think they want – and to attract them (and their tuition dollars) in the first place – some colleges and faculty are backsliding down the left slope. Student outcomes may be maximized by courses that are entertaining in the service of learning objectives. But when entertainment is a primary motivation, colleges and universities may find themselves on a slippery slope to courses and programs in “eSports.”

Whether seeing how many students can fit into a phone booth or Volkswagen, or posing as secret service agents, college students have been doing dumb things from time immemorial. And back in the heyday of Volkswagens, when tuition was cheap, it might not have been that harmful for colleges to mess around with programs of study. But the unsustainable cost of college makes that impossible and irresponsible.

America’s colleges and universities have an obligation to resist the siren song of entertainment and videogames; they must be more than a mirror of bad parenting. It may mean losing a few students to the irresponsible school down the road. But it will mean stronger student outcomes. When the book (or eBook) on “eSports” is finally written, I hope we’ll be able to say of higher education what was said of Douvos’s Secret Service agent: “These guys don’t mess around.”

CLOSING THE GAP
The direction of travel in closing the skills gap.

HR Dive report on SHRM survey showing the majority of HR respondents believe America’s skills gap has worsened in the past two years, by Valerie Bolden-Barrett.

83% said that the quality of job applicants decreased [in the past two years]… nearly half said the education system has done little to remedy the problem.

Atlanta Journal-Constitution article on new report from Southern Regional Education Board on skills gap in 16 Southern states, by Maureen Downey.

In SREB states in 2017, more than 12 percent of adults ages 18 to 64 — over 9 million — had less than a high school education, and 28 percent — some 21 million — had a high school credential and no more. These adults will need significant training and education to obtain the skills they need to keep up with technological advancements in today’s job market.

Staffing Industry Analysts brief on Korn Ferry report stating that majority of HR professionals now hire for certain skills even if there are no open positions.

57% have hired for a specific skill even if they didn’t have a defined role for that candidate. And more than three-quarters of respondents, 77%, said they are hiring for roles today that didn’t even exist a year ago.

The Apprenticeship Capital of America

Jobs for the Future report on how Chicago employers are leading the way in expanding apprenticeships beyond building and industrial trades, by Eric Seleznow.

There are many in the workforce development field who are forever seeking the holy grail of finding, persuading, and engaging employers to lead and shape the future workforce in their communities, but few have succeeded like the Chicago Apprenticeship Network.

Dragging a Generation Down

To the individual, the $1.53 trillion is not the most pressing problem. The problem is the wedge of your salary that disappears each month. The problem is not being able to find work in the field you took out loans to prepare yourself for. The problem is spending hours of your life on hold with call center representatives who can’t answer simple questions. The problem is the growing certainty that you were sold a false bill of goods about the immeasurable value of higher education, and that’ll you’ll be forever paying down the cost of a broken dream.

Hechinger Report article on how student athletic departments have picked up the slack from career services, by Kevin Blue and Ryan Craig.

In a 2016 survey conducted by the NCAA, student-athletes were asked what additional topics coaches and administrators should talk about more frequently. Across divisions and gender, the most requested topics were related to “academic success and especially preparing to get a job after college.”

Revature puts recent college graduates – those who are U.S. citizens with four-year degrees in computer science or another STEM major – through 12-week immersive training programs and then contracts them out to clients.