A few weeks ago I learned that my 96-year-old grandfather is charging his octogenarian roommate $5 per week to read his used newspaper. This was upsetting. Yes, the paper is The Globe & Mail, surely Canada’s finest newspaper. And yes, he’s only charging Canadian dollars. But I wondered whether a life of profligacy had reduced my grandfather to a state of penury requiring him to cadge money from his roommate.

My grandfather has lived a charmed life. A well-known Canadian watercolorist (actually watercolourist) with paintings in Canada’s National Gallery in Ottawa, John once wrote a manifesto titled “A 7-Minute Joy,” the point of which was that no watercolor should take more than seven minutes to complete. The license place on his car was A7M JOY. John served in World War II (painting in England and France) and now lives in a wonderful government-funded retirement home for veterans where he continues to paint regularly. John traveled widely, lived large and was extremely generous with family and friends. Everyone loved everything about John, except perhaps his awful puns. Every time my aunt passed around the mushrooms at Christmas dinner, like clockwork, John would announce from the head of the table: “they don’t leave mushroom for complaint!”

Upon investigation, John’s finances don’t leave mushroom for complaint. He’s the top seller in the retirement home gift shop and proudly told me he has $12k in his account. It turns out that charging his roommate $5 to read his Globe & Mail is just a weird thing that old people do.

While my grandfather may not have been overly profligate, let me tell you who has: colleges and universities. Lazy Rivers are a symptom of profligacy – the aquatic equivalent of my grandfather’s 7-Minute Joy. But we get a better sense of the magnitude by looking at college indebtedness. Bain & Company reported that between 2002 and 2008, schools increased long-term debt by an average of 12% per year – more than double the growth rate of spending on operations. And this year, colleges and universities successfully sold $32.7B in debt through September – almost 2x what they sold in the first three quarters of 2014.

Most of this additional borrowing is going into bricks and mortar. A recent Wall Street Journal article reported on two institutions that recently sold bonds to fund new facilities. Hawaii Pacific University borrowed $32.5M to pay for a major renovation and Nevada’s Roseman University of Health Sciences raised $67.5 million for a new office and research building. Despite the fact that municipal bond yields remain near record lows (~2%), Hawaii Pacific had to issue bonds at 4.48% and Roseman at 5.68%.

Bond rating agencies such as Moody’s have begun warning investors to steer clear of smaller schools, and the Journal quoted the head of the muni bond team at T. Rowe Price saying he’s avoiding small liberal arts colleges in favor of schools with “national brands.” But what’s amazing to me is that schools like Roseman and Hawaii Pacific are able to raise debt at rates this low. Perhaps one reason new debt has nearly doubled this year is that colleges and universities sense it won’t be long before the market catches on.

In other sectors, when insiders “cash out” to this extent, it’s fair to surmise that a peak has been reached. In 2015, in higher education, we’ve reached “Peak College.” In many respects, it’s all downhill from here.

The ball will start rolling downhill for public institutions when investors begin accounting for pension obligations. The University of California pension fund has a shortfall of between $8-16B. Increasingly, universities will be required to direct a greater percentage of operating budgets towards filling pension gaps. This is already happening in Texas, where community colleges are now being required to contribute 50% of annual pension obligations from general funds. And in some cases, state directives like this are contributing to additional borrowing. The University of California system has borrowed $2.7B since 2011 to help close the pension gap.

Then there’s the cost of health care for retired employees. 90% of private and public universities continue to offer this benefit (vs. 20% for the rest of the economy). Michigan State eliminated the benefit for all new employees after calculating that it was already a $1B bill that would double every 15 years. Still, this is the exception. Most institutions continue to either pay retiree premiums in full or split the cost.

But the major repricing of college and university debt will occur when ratings agencies begin to account for fundamental demand and systematic interdependencies in their ratings methodologies. Moody’s, for example, considers factors such as market position, operating performance, governance and management and strength of balance sheet to ascertain whether future revenue streams are likely to be sufficient to meet debt service obligations, but not whether degrees will continue to be the default currency of the labor market.

One would think that ratings agencies would have learned from the Great Recession, when ratings agencies failed to take into account fundamental questions of liquidity and demand for classes of securities and interdependencies therein. In higher education, while “just-in-time” providers like General Assembly and Galvanize are rushing in to fill the gap and online providers like Udacity and Coursera attempt to establish shorter, less expensive credentials that will have credibility with employers, ratings of college and university bonds continue to be bottomed on faith that demand for bachelor’s and master’s degrees will continue unabated.

As Mitch Daniels, President of Purdue has said, “Higher education has to get past the ‘take our word for it’ era. Increasingly, people aren’t.” At some point in the next few years, ratings agencies won’t either.

So if your institution issued bonds this year during “Peak College,” take pride in the wonderful new buildings. But keep in mind it’ll be a 7-Minute Joy in the context of higher education’s millennium-long history. Because when ratings agencies catch up, the resulting financial wreckage is likely to leave – as my grandfather would say – “mushroom for complaint.”

1. College Rankings Meet ROI Wall Street Journal article on how alumni salary data released in September by the Department of Education is upending the rankings racket, by Jillian Berman. A growing number of websites sort colleges based on financial criteria, allowing students and families to compare schools on such factors as return on investment and graduates’ prospects for employment. Read more 2. Inputs Correlated to ROI Brookings Institution updates its groundbreaking value-added rankings with Department of Education alumni salary data and learns a few things. Four college quality factors are strongly associated with higher earnings for alumni:
Curriculum value: The amount earned by people in the workforce who hold degrees in a field of study offered by the college, averaged across all the degrees the college awards;
STEM orientation: The share of graduates prepared to work in STEM occupations;
Completion rates: The percentage of students finishing their award within at least 1.5 times the normal time (three years for a two-year college, six years for a four-year college);
Faculty salaries: The average monthly compensation of all teaching staff. Read more 3. The New Credentialing TechCrunch op-ed by Pluralsight CEO Aaron Skonnard on the unbundling of the degree into new, shorter and more meaningful credentials. We live in a time of real-time analytics, and we dashboard everything inside the organization, from sales to operational costs to customer sentiment. It’s only natural that this trend should extend into the way we vet, assess and track the skills and abilities of our prospective and current employees. The more data options we have, the more deliberate we can be about making good hiring decisions, and the more prescriptive we can be about addressing monumental skills gaps in the workplace. The college degree alone can’t provide this kind of holistic insight. Read more 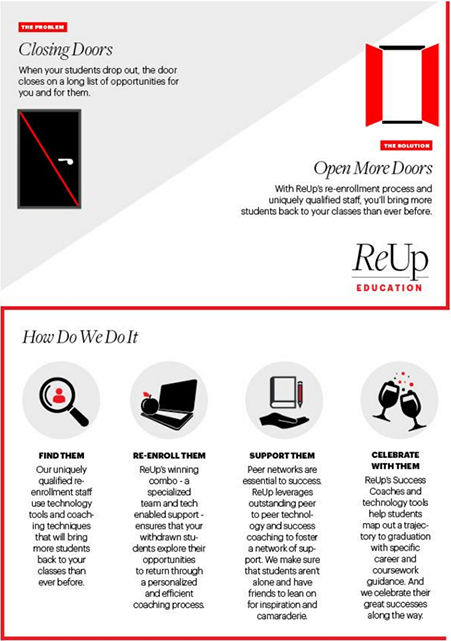