Not So Gung Ho!

The first movie I attended without a parent was Gung Ho! The comedy starred Michael Keaton (Mr. Mom) and Gedde Watanabe (the wacky Japanese kid from Sixteen Candles) and portrayed a Japanese automaker taking over an American assembly plant. Released in 1986 at the apex of Japan Inc., Gung Ho! is perhaps best remembered for its offensive stereotypes; Toyota has since used the film as an example of how not to manage Americans. In retrospect, it shouldn’t have been a surprise that Gung Ho! was a terrible movie and only ran for a few weeks. I felt awful that my paranoia of Japan Inc. led me to force my impressionable younger brother to join me in line in the cold on opening day. 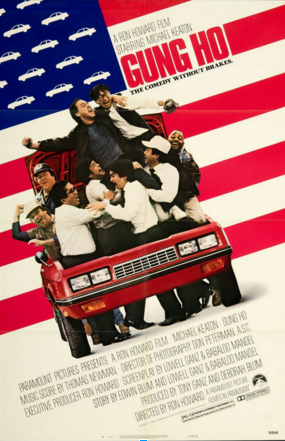 Little did we know at the time that Japan Inc. only had a few years left to run. The central element of Japan Inc.’s close relationships was the keiretsu, a system of corporate interlocking ownership. Member companies in the keiretsu owned shares in each other’s companies – sometimes in direct competitors. By 1988, over half of the value in the Japanese stock market consisted of these cross-shareholdings. But it turned out that this system of overlapping ownership stifled competition and innovation, and Japan Inc. atrophied.

All this came back to me last week as I was booking air travel, staring at my screen in disbelief at continued ridiculous prices despite the fact that oil (and jet fuel) prices are at record lows and fuel typically accounts for a third of airline operating expenses. According to José Azar of Charles River Associates, one reason for this anti-competitive behavior is the emergence of a mini keiretsu in air travel. In a new paper titled “Anti-Competitive Effects of Common Ownership,” Azar and his colleagues blame overlapping ownership: together, the five largest mutual fund managers are amongst the largest shareholders of the four large U.S. airlines. For example, these funds own around 17% of American and Delta. Because “common ownership of natural competitors by the same investors reduces incentives to compete,” Azar calculates that because airline shareholders are failing to act like owners, ticket prices are up to 11% higher than they’d be otherwise.

If resistance to price competition and innovation sounds familiar, it should; it’s also a hallmark of American higher education. Could one reason be that college and university trustees fail to act as proper owners? Although higher education institutions aren’t suffering from the cross-ownership of Japan Inc. or the airline industry, cross-ownership is only pernicious because it prompts board members and shareholders to fail to act like owners.

A 2011 Public Agenda survey of college and university trustees revealed that only a small minority of trustees took positions that were critical of administrators and a majority of trustees said their primary source of information was the President. One trustee noted, “It’s an honor to be on the public board, but it's an honor that tends to accrue to people in the later stages of life, after they've already achieved some kind of prominence at some usually unrelated discipline… Trustees don't really want to spend the substantial time it takes to get up to speed on issues to the point where they can actually debate with an officer at the college.” Another: “University trusteeships are sought-after positions because there are benefits that go along with it, and you've got people there for all the wrong reasons… You don't have people sitting on these boards who are really interested and engaged in making change.”

One sad but amusing “wrong reason” is the one-issue trustee. A recent op-ed in Inside Higher Education titled “Mired in Mediocrity” described this phenomenon:

On one board that we worked with, the answer to every institutional problem was “women’s golf.” They didn’t have a team, and one trustee clearly wanted one. The institution needed to increase enrollment and posed that issue to the board. “Invest in women’s golf” came the solution from the often vocal trustee. The institution wanted to engage alumni more effectively. “Women’s golf,” that same trustee urged a few hours later in the meeting, contending, “Women golfers will be dedicated alumnae.” During discussions about increasing auxiliary revenue, he jumped in with, “Well, you know, we should consider improving the golf course and creating a women’s golf team.” And so it goes.

In this piece, Cathy Trower and Peter Eckel describe how, on the board assessments they’ve conducted, trustees give themselves a C+ grade for reasons such as:

What these various shortcomings have in common is that trustees and boards aren’t acting like owners. This abdication of responsibility has nothing to do with principles of shared governance. In fact, it runs contrary to it; shared governance cannot work effectively with absentee trustees.

Although a handful of universities over the past several years have reset list tuition prices to levels close to what their net prices were, I’m on firm ground in saying there’s less price competition in higher education than virtually any other industry. And anti-competitive behavior not only manifests itself in lack of price competition, but also in lack of differentiation. This is an important source of the isomorphism – the tendency of all postsecondary institutions to converge on a unitary model and product (i.e., the degree) – that has been so harmful to our system of higher education and, most important, to students. Some of this lack of innovation and competition must be attributed to absentee trustees.

In early February, as part of its previously announced effort to shift the focus of colleges and universities to student outcomes, the Department of Education announced several additional requirements for accreditors. Unfortunately, none of these requirements touched on governance. If this (or any future) administration is serious about utilizing accreditors to focus colleges and universities on student outcomes, new governance standards need to be set and tightened.

First, trustees need to be engaged. Attendance at quarterly meetings is not a sign of engagement. Meaningful involvement in real project work on behalf of the institution is what we’d expect of a real owner. Second, boards need to be of a manageable size. Large boards established for the primary purpose of fundraising from trustees should not be permitted. Most important, trustees need to be qualified. Having attended the institution is insufficient qualification; trustees ought to have relevant experience in the operation of educational institutions, in programmatic areas that are core or strategic to the institution, or in technology, which is increasingly impacting every element of colleges and universities.

In order to assess this, accreditors will need to more than meet with a few handpicked trustees once every 5-10 years during a site visit – the current “standard.” Failure to require boards and trustees to be much more gung ho could doom our colleges and universities to the same fate as Japan Inc., or that terrible film for which my brother still has not forgiven me.

1. Integrating Skills Training Into The Liberal Arts The Atlantic article on employing the case study method for teaching history, by Christine Gross-Loh. Immersion in case after case [is like] batting practice that helps train judgment. The idea is to help students develop an instinct for how to respond even to problems… that feel unprecedented. Through sheer repetitive exposure to problems and problem-solving, students learn the art of decision-making—and develop better judgment—in “much the same way as you might learn a language. Read more 2. I’ve Seen The Future, And It Is Change Blog post by Southern New Hampshire University President Paul LeBlanc on five major trends for 2016. We’ve seen a growing crisis of confidence from the labor market in higher ed’s product. Thirty five years ago, a college degree was a signal to the labor market that you knew things – you could write well, you could present, use critical thinking skills, etc. Today, most players do not believe that of our graduates. Read more 3. Critiquing The Cult Of The Degree Newgeography.com blog post asking how supply of higher education can be a constraint on California’s growth when California creates twice as many degrees as net new jobs, by Bill Watkins, head of California Lutheran University’s Center for Economic Forecasting. People observe that, on average, college graduates earn far more than non-graduates and conclude that education creates higher income, completely ignoring the self-selection bias… Repeat after me: correlation does not imply causation. Read more