A few years ago, Mike received a call from “David in Redbank,” who wanted to get Mike’s opinion on a rookie pitcher for the Detroit Tigers who had been tearing up the American League since being called up from the minors. The call is worth a listen and also transcribed below.

Mike: David in Redbank, what’s up Dave?
Caller: Hey Mike, what’s going on?
Mike: What’s up?
C: I just want to talk about this guy Al Alburquerque. I mean, what’s his deal? How bad is this guy?
M: Who is Al Alburquerque?
C: Al Alburquerque.
M: No. If you’re trying to be funny, it’s Albuquerque. It’s not Al Alburquerque.
C: His first name is…
M: I mean. Oh jeez. Children near the phones. [HANGS UP] 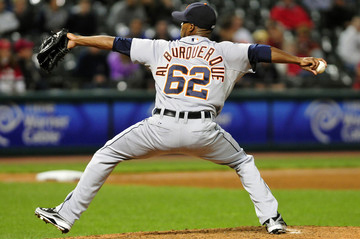 Mike’s defensiveness and inability to admit he made a mistake caused his trigger-finger audience to go ballistic. Many pointed out that no one ever called the pitcher Alberto Jose Alburquerque. Other comments included:

“He obviously didn't know who the hell he was even though he was one of the best relievers in the A.L during the 2011 season. Seriously why can't he just admit he didn't know who he was? It's just bizarre.”

“Mike: Just say you were WRONG. A simple apology would have been fine… No wonder everyone hates you Mike.”

While radio talk show hosts are routinely wrong several times an hour, colleges and universities only have to be wrong once to end up at the end, AKA Sweet Briar College. Last week, following a decision by Sweet Briar’s board of directors, the college announced that as a result of “insurmountable financial challenges,” this semester would be its last. The corresponding video message from the College’s President cited “two key realities that we could not change: the declining number of students choosing to attend small, rural private liberal arts colleges and even fewer young women willing to consider a single-sex education, and the increase in the tuition discount rate that we have to extend to enroll each new class.” (Not to quibble, but I count three realities, which discrepancy may signal an even more fundamental problem.)

Understandably, the announcement was met with waves of sadness on campus. Reportedly, hundreds of young women began sobbing all at once. But the emotion online was different. When the message was simultaneously posted to Sweet Briar’s Facebook page, hundreds of angry and defiant comments poured in from alumni and strangers alike. Questions were asked about the $85M endowment, “sketchy past actions” by the current and most recent former President, whether there were sweetheart severance packages for the college’s leadership, if any directors of the college were in the real estate business and planned to take advantage of the “hugely valuable real estate,” and also whether the college had restricted faculty and staff via nondisclosure agreements or “gag orders” from talking publicly. A Web site appeared with a $250M fundraising goal and on Twitter, someone invented the hashtag #savesweetbriar. 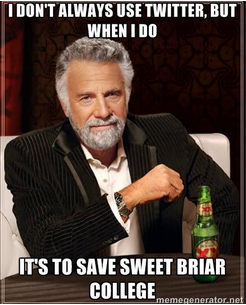 Turning from anger to ridiculous, at Buzzfeed, the progenitor of thousands of easy-on-the-brain Internet lists, someone sitting in New York created “15 Reasons to Save Sweet Briar College,” likely without having ever visited the state of Virginia, let alone Sweet Briar. The “reasons” include:

If it’s natural to get angry at Mike Francesa for failing to admit a mistake, why are so many people upset at the board and leadership of Sweet Briar College for admitting that their business model was effectively a mistake?

I believe it comes back to isomorphism, which I have written about on several occasions as perhaps the biggest challenge facing American higher education. Isomorphism is the phenomenon by which American universities have acquired similar characteristics. R.R. Reno describes isomorphism in a piece he wrote for First Things:

There aren’t enough Nobel Prize winners to go around, so lesser universities chase the also-rans and young phenoms in the hope of gaining ground in the reputation race, offering them lighter teaching loads. To dampen the ill-will that arises when regular faculty began to envy the student-free lives of the academic heroes, the wealthier universities have consistently moved toward across-the-board reductions in teaching loads, with not-so-wealthy schools imitating this trend as best they can. This, of course, requires shifting still more teaching to graduate students and other adjunct, non-tenured faculty.

The result is a uniform model of program delivery through which most American colleges and universities aim to become “The Harvard of the _____” (fill in the blank for the region). They attempt to offer the same range of programs and provide the same services as an institution with an endowment of nearly $30 billion.

In the case of the Sweet Briar closure, isomorphism has worked the other way. Because Sweet Briar has most of the accoutrements of more elite institutions, we analogize Sweet Briar to our own college experience. If Sweet Briar can close, my institution must be in jeopardy. (I’m waiting for someone to create the Twitter hashtag #weareallsweetbriar.) This provokes anger and resistance.

The wisest words in the Sweet Briar dust-up come from William Bowen, former President of Princeton and the Mellon Foundation, who wrote the following in a foreword to the 2012 book Cautionary Tales: Strategy Lessons From Struggling Colleges:

Thanks to Dave Friedman, an expert in the foibles of Mike Francesa and talk radio hosts generally.

Wall Street Journal article on the first Ivy League university to launch an online or blended degree program with a service provider, by Melissa Korn: “Yale University is creating a Web-based master of medical science degree for aspiring physician assistants, the latest sign that online learning is gaining acceptance from the nation’s most prestigious institutions of higher education. ‘It is a coming-of-age for online education’, said Lucas Swineford, executive director of Yale’s office of digital dissemination and online learning. ‘The stigma has certainly changed over the past five or six years. This is a Yale degree.’” Read more Fast Company profile of Guillaume Dumas, the ultimate DIY student who sat in on classes at Yale, Stanford, Brown and Berkeley without enrolling as a student, by Elizabeth Segran: “Attending these universities without actually graduating from any of them was also a kind of experiment to figure out what, exactly, a university degree can get you in life… Degrees tend to matter more to big corporations with human-resources gatekeepers that vet resumes. But the economy is increasingly moving towards independent employment…” Read more PandoDaily article on University of Ottawa study of impact of flipped classroom on student performance, engagement, and class preparation, by Michael Carney: “Class participation… increased from approximately 50 percent to 99 percent after adopting Echo360… final exam grades increase between 3 and 10 percentage points from historical levels… while failing grades were reduced by 80 percent.” Read more 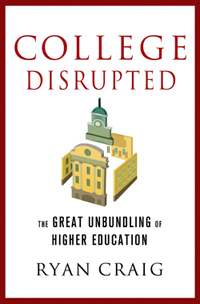 College Disrupted: The Great Unbundling of Higher Education was published by Palgrave Macmillan this week.

“An ambitious blueprint that administrators would be wise to heed.”
-   Publishers Weekly

“A more encouraging outlook, even in the face of upheaval… An interesting perspective in the continuing debate about the future of American college education.”
-   Booklist

“He is plainly versed in pop culture (and a big Van Halen fan in particular)… his dismissal of the recently trendy massive open online courses as ‘the Spice Girls of higher education’ is priceless.”
-   Kirkus