Two weeks ago, President-elect Trump named his selection as Ambassador to Israel: David Friedman, a bankruptcy lawyer from Long Island who has done legal work for Trump for the past 15 years. David Friedman’s qualifications arise primarily from his support for Israeli settlers in the West Bank, which a former Ambassador noted in the New York Times, “are not normally seen as appropriate qualifications for the job.”

Scant though it may be, David Friedman’s diplomatic experience nonetheless exceeds that of my Yale roommate, also named David Friedman, who in the days after the appointment, was confused on Twitter and in the media for the new Ambassador. After @Israel4Trump congratulated my Dave Friedman on his appointment, he responded: “Working on my confirmation hearing,” and “I would be the first U.S. Ambassador to Israel who has never been there.” A professor at Willamette Law School, Dave was subsequently quoted in The Oregonian saying: “International politics is not really my thing,” and “There’s a community of David Friedmans out there who are absorbing this.” Ultimately, Dave felt obliged to clarify matters for tweeters who were all atwitter about his purported opposition to a two-state solution:

President-elect Trump may be America’s most famous employer. But in naming the other inexperienced David Friedman as Ambassador, he is playing against type. In a new paper titled Unpacking Human Capital: Exploring the Role of Experience and Education in Shaping Access to Jobs, University of Pennsylvania economics professor Matthew Bidwell evaluated a Burning Glass dataset of 3 million jobs to characterize the “demand” side of the talent marketplace (for which colleges and universities are a major “supplier”) and segmented it into a 2x2 matrix like the following: 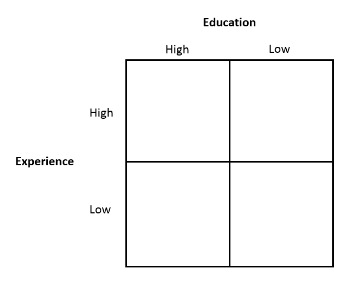 None of this is surprising to GradStaff, the national career matchmaking firm for new and recent college graduates. GradStaff’s survey of entry-level job seekers from May through September 2016 found 70% were either unemployed or working in a full-time non-professional job to make ends meet. The typical job seeker had been looking for nearly four months, applied to 23 jobs, and had two interviews. The empty feeling of rejection in these new and recent college grads is echoed in Bidwell’s finding that one quadrant of his matrix is virtually empty. 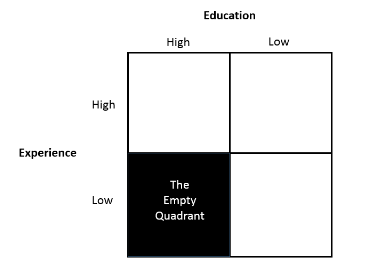 Bidwell surmises that employers now view the primary value of higher education as inculcating abstract knowledge that accelerates the learning and mastery of large numbers of related skills and/or rare skills. One consequence of this, however, is that it should “be rare for employers to seek workers with high levels of education but little experience – those workers would have little to offer in the way of ability to perform valuable activities, but their education may make them more costly than less educated workers.”

Many of these skills are technical, involving proficiency in industry-standard or job function-standard software. As I noted in October, technical skills now outnumber all other competencies (cognitive and non-cognitive) in job descriptions across virtually every sector of the economy. While Bidwell’s survey isn’t longitudinal, I’d bet the Empty Quadrant was less empty 10 or even five years ago. Faced with colleges and universities that have largely failed to incorporate any of this “last-mile” training into their programs, employers have reacted to increasing technical requirements by asking for more experience. But what they’re really saying is that if you want to get your foot on the first rung of the ladder in our shop, there are some threshold technical skills that we require.

While these skills are easily identified by anyone who cares to look at job descriptions, neither colleges generally, nor their career services departments, are looking. (In the GradStaff survey, only 37% of students gave their career services office an above average rating.) Nor are employers likely to change course. As Bidwell notes, “only those employers who are willing to invest in the on-the-job learning of the educated workers would be prepared to hire them.” And Wharton’s Peter Capelli has documented how and why American employers have never been less interested in training new hires.

After the media frenzy had abated, my Dave Friedman told me his first act as Ambassador would have been to move ‎the U.S. embassy not to Jerusalem, as incoming Ambassador Friedman has promised, but rather to North Haven, just north of New Haven, because "you can do anything in North Haven."

If Dave’s right, maybe North Haven will be the first place we solve the experience conundrum – a thorny problem perhaps exceeded only by the one Ambassador Friedman will encounter when he assumes his new position. Intermediaries like GradStaff, which recruits recent college graduates, identifies their core competencies and prepares and presents them to employers, are likely to thrive as they fill the gap. Bootcamps like Galvanize, AlwaysHired and PrepMD are providing training in the very technologies employers are demanding. And training + placement providers like Revature offer a complete solution for students and employers.

As these intermediaries grow, however, employers would do themselves, new graduates and their country a favor by revisiting what it is they’re actually looking for when they add an experience requirement to what could or should be entry-level positions.

And so Happy New Year! I hope 2017 brings you many great experiences, and if you’re an employer, also an understanding that for most of your first-rung jobs, a great level of experience is not actually required.

University Ventures (UV) is a fund that invests in entrepreneurs and institutions that are reimagining the path from higher education to a stronger economic future for students, universities and employers.

1. End of the Gravy Train Wall Street Journal report on comments by Virginia Foxx, incoming chairwoman of the House Committee on Education and the Workforce, that the next Congress should look to reduce how much the government lends for higher education. Rep. Foxx… said the government has made it too easy for students and their parents to borrow too much, in turn driving up prices. She said she won’t seek to end federal student lending altogether. But she singled out so-called Plus loans, which go to graduate students and parents of undergraduates, as being problematic. Read more 2. Skin in the Game The Hill op-ed by Daniel Pianko on Department of Education income-driven repayment miscalculation and the potential of income share agreements to change incentives in higher education. It would be a mistake for Congress to think of income-based repayment as a weapon of mass deficit-generation because in the hands of colleges and universities, income-based repayment has the potential to stem ballooning college costs and powerfully align the interests of institutions and students. Read more 3. The Shift to Competency-based Learning and Hiring Innovate+Educate whitepaper on the companies and technologies that are changing education and employment practices. Closing the skills gap by ending the monoculture of degrees, ending pedigree- and degree-based hiring, and growing a diversity of faster, less expensive, and respected pathways to high-value employment is the calling of our time.
Read more