Two years ago we published our first University Ventures Letter on “job jugglers” – underemployed recent graduates forced to take multiple part-time jobs in order to make ends meet. We discussed how starting salaries had declined in the recession and wondered whether this was a temporary phenomenon.

Two years later this seems to be the new normal. 53% of recent college graduates are unemployed or underemployed. 6.7 million young adults are not in school and not working. Finding a job takes at least twice as long as it did five years ago. At the same time, 50% of companies report difficulties in filling jobs and there are over 3 million unfilled jobs.

Each year, nearly 4 million students matriculate at a 2-year or 4-year institution. For these students the decision to invest in their future through higher education is becoming harder and harder and begs for a conceptual framework to help work it through.

Back when I made my decision to attend college, I relied on a simple framework: the 1989 Yale College promotional video. It proved such a convincing device that during college my roommates and I watched again and again in the fervent belief that constant viewing would crowd out any actual lesser memories of our Bright College Years. The video was chock full o’ terrifically handy statements like “every time we sing, we win” (useful at that Arcadia of a capella) and “Everybody complains about the food. But at the end of every semester everybody’s 10 pounds heavier and heading to the gym. Doesn’t seem like the food was that bad after all, does it?” The words ring as true today as when I first heard them nearly a quarter century ago.

But that framework no longer suffices – not only due to the omnipresent neon T-shirts and scat rondos. The decision to attend college now requires a more rigorous framework. The one I’m thinking of for the current quandary is the game show “Goats and Cars.”

If you’re not familiar with Goats and Cars, it is my pleasure, contestant, to welcome you to this high-stakes game show. I’m your host, John David Stutz.

You stand in front of three curtains: curtains A, B and C. Behind two of these curtains, you will find goats. But behind one curtain: a brand new car! Suffice it to say, your objective is to win the car (i.e., achieve a return on your investment in higher education), avoiding the goat.

Please make your selection. What’s that? Curtain C, you say? Are you certain? OK. Curtain C – as in college – is your choice.

Now to make life a little harder for you – which I can do, because I know what’s behind each curtain – I’m going to show you a goat. So I’m pulling back curtain B – as in Beware and Be sure to make the right choice, or you’ll be spending a lot of money on a goat – and showing you that there is a goat there.

But this is no ordinary goat. It’s a talking goat, and it has a few research-based facts it wants to share with you from its friends at Innovate+Educate, a not-for-profit organization focused on implementing research-based strategies to address the national skills gap.

I’m now handing the microphone over to the talking goat.

2. Now take a look at this remarkable graph showing the range of math skills, according to a validated assessment, by the number of years of education. While the slope is positive, the variance for each year is so wide that many bachelor’s and master’s degree holders (16 and 17 years of education) demonstrate applied math skills that are below-average for high school students. And many high school students demonstrate skills that are at the top of the range for college and graduate school. 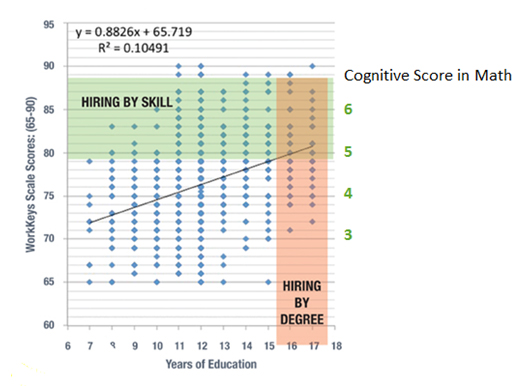 3. And finally, for jobs that state that a college degree is a requirement, one-third of all unemployed youth without a college degree would be qualified for these jobs if employers adopted a skill-based requirement (along with the requisite assessments), rather than using a degree as the screening mechanism.

There you have it. That’s quite a goat, isn’t it ladies and gentlemen?

So my question to you, contestant, is this: Do you want to change your choice to curtain A? Or will you stay put with curtain C?

As the data cited by the goat becomes better known by students and employers, more and more students will make the choice to switch, taking a different path than traditional higher education. (By the way – and here comes your higher education for the day – switching is always the right answer on Goats and Cars. The reason: set theory. When you chose curtain C, the “set of curtains you chose” had a 33% chance of containing the car, while the other set, the “set of curtains you didn’t choose” had a 67% chance. As I knew where the goats were, and as the “set of curtains you didn’t choose” had at least one goat in it, the fact that I revealed a goat from behind curtain B didn’t change those probabilities. So by switching, you double your likelihood of winning the car.)

When students do switch, colleges and universities will either fight or switch as well. The smart ones, in the immortal words of Public Enemy, will “rather switch than fight.”

What does switching mean for colleges and universities? It could mean radically lowering tuition. Or it could mean adopting a competency-based model. It almost certainly involves online delivery. But as we’ve maintained since Sebastian Thrun declared in January 2012 that he had taken the red pill and seen MOOC Wonderland, switching has little to do with “massive” or “open”. Less than 18 months since their debut, the worm seems to have turned on MOOCs despite accelerated venture capital investment. Tweets containing the words “MOOC” and “fad” are trending up, traffic to the MOOC sites is trending down (below), the founder of Coursera is saying that his company is not just about MOOCs, and Thrun himself has acknowledged that he’s “never made it through a complete MOOC.”