Q. How many academics does it take to change a light bulb?
A. Change? Change? Who said anything about CHANGE??

In early September 1993, new Yale President Rick Levin gave his first welcoming address to matriculating freshmen – Yale College’s class of 1997. According to tradition, following the address the President situated himself outside Woolsey Hall in the Rotunda and the freshmen would shake his hand upon exiting.

My roommates, my brother Aaron and I decided it was important to provide a special greeting to President Levin and the freshmen. So we sourced 1,500 large blue beads and printed up small cards on thick card stock. The cards had the Yale shield (“Lux et Veritas”) up top and read as follows:

Dear Freshman: For nearly a century, following the Welcoming Address, members of the incoming class have participated in the tradition of meeting the President and passing a small wooden Yale-blue bead into the President’s palm when shaking his hand. At the time of your graduation, you will again receive one of the beads exchanged today (perhaps the one you yourself passed to the President) as a reminder of the day you began your Bright College Years.

The beads themselves were Yale-blue. That took hours of calls and visits with nice older ladies at Connecticut sewing supply stores.

After the speech we positioned ourselves outside the hall and yelled over the din: “Be sure not to leave without your bead. You cannot greet the President without a blue bead.” Numbers of panic-stricken freshmen lost their place in the line as they realized they had not received beads.

Back in the hall, a surprised President Levin moved quickly to problem-solving mode – handing the beads to then Dean (now Duke University President) Richard Brodhead for placement in an ever-increasing series of cups, vessels and eventually fish tanks. Levin’s daughters played with the beads for a time. They next appeared in the spring of 1997 at a graduation reception for that class where a sign read, “Come Retrieve Your Blue Bead.” The beads became a running joke in the early years of the Levin Presidency.

This prank demonstrates the power of tradition in higher education and explains why employers continue to look at degrees as the primary basis for hiring. Don’t try to go against the grain when it has always been thus. This is why University Ventures’ motto is “Innovation from within.” Waiting on any other kind of innovation in higher education is about as much fun as seeing how high you can count.

We’re going to see how fun this actually is. A number of would-be disruptors to the higher education status quo have started to count and have ample capital to go on for some time. Companies like General Assembly (onground), Udacity (online) and Coursera (online and now headed by the same Rick Levin) are going against the grain of the degree by offering just-in-time higher education, not in the form of a degree (and in some cases, not from an accredited university), in areas of demand, primarily high-end information technology. Udacity calls its credentials “nanodegrees.” Coursera’s are “specializations.” General Assembly says the credential is the job itself. The million-dollar question is how long it will take for employers to recognize the value of these novel, non-degree credentials. (And if the student’s first employer understands it, will the second or third?) Or will employers simply continue to require degrees because this is the way it’s always been.

Recent studies show that degrees will be hard to shake. As is often the case in higher education, while Silicon Valley companies get the attention, fundamental changes are happening on the ground at accredited institutions like community colleges. From 2000 to 2010, the number of short-term (< 1 year) certificates awarded grew 151%. New certificate programs are being offered in areas of high demand like information technology, health care, energy, and advanced manufacturing.

Unfortunately, according to researchers at Columbia University’s Community College Research Center and the Career Ladders Project, an initiative of the Board of Governors of the California Community College, these novel credentials don’t seem to help students get jobs or make more money. The study, titled Labor Market Returns to Sub-Baccalaureate Credentials: How Much Does a Community College Degree or Certificate Pay followed first-time college students from Washington State community colleges for seven years and compared students who earned short-term certificates with students who dropped out. The researchers found no difference in placement rates or income. In fact, at the end of the tracking period dropouts were earning more than those with certificates. Similar findings have been reported in Kentucky, North Carolina and Virginia. The authors concluded: “Although we would not go as far as to say that short-term certificates never have any value, the evidence is suggestive that they tend to have minimal value over and above attending college and earning some credits.”

There are two possible explanations: (1) Students aren’t learning anything of value in these short programs; or (2) Employers don’t know how to value these novel credentials. (Hint: one is far more plausible than the other.)

Employers are right to be skeptical of novel credentials. When a five-year-old boy in the UK can pass the Microsoft Certified Professional exam and become an “MCP,” the emerging certificate-badge industrial complex is called into question. (To their credit, the good people at the testing center were concerned he was too young.)

As the blue beads prank showed, when you’re trying to get someone to believe something in new in education, appeal to tradition. The exception is likely in IT. And even there, the students enrolling en masse in coding boot camps – a new model that will probably exceed $1B in revenue in a few years – are pairing novel credentials with traditional ones. Nearly all students enrolling in General Assembly and other boot camps have already earned degrees. These “top-off” or “add-on” programs are designed for students who already have their (expensive) traditional credential. So while we expect to see rapid growth in new high-end IT credentials, these programs aren’t so much displacing degrees as helping existing degree holders improve the return on their college investment.

Therein lies the chestnut of a great idea: Rather than stacking a novel credential atop a degree, stack novel credentials atop each other to make a degree. Stackable certificates are great, but they have to stack up to something; for the foreseeable future, that something remains a degree. So when the employer asks: “What is this certificate in sequence analysis?” The answer is quick and clear: “It’s a credential I was awarded halfway through my masters degree in bioinformatics.”

This is what General Assembly competitor (and UV portfolio company) Galvanize is doing. In January, Galvanize will launch a masters degree in Big Data at its campus in San Francisco. In time, the company expects to offer other degree programs and will allow students to articulate the novel “gSchool” credentials they might receive from shorter courses into full degrees that are more easily understood by hiring managers. This is the path from “top-off” program to a model that will help transform higher education over the next decade and dramatically improve return on investment for students.

Higher education is a big investment decision. And the prerequisite for a payoff on that investment is that employers understand it. Down the road, that will mean double-click degrees or novel credentials that also permit employers to “double click” in order to view underlying performance and competencies. For now, however, Galvanize’s example of helping employers understand how novel credentials translate into recognized ones is one that should be followed.

In February 2013, over 500 alumni and friends attended a special tribute at the Yale Club of New York City for departing President Rick Levin. At the event, President Levin gave attendees “special blue beads of farewell” along with a card that looked much better than the ones we concocted nearly 20 years earlier: 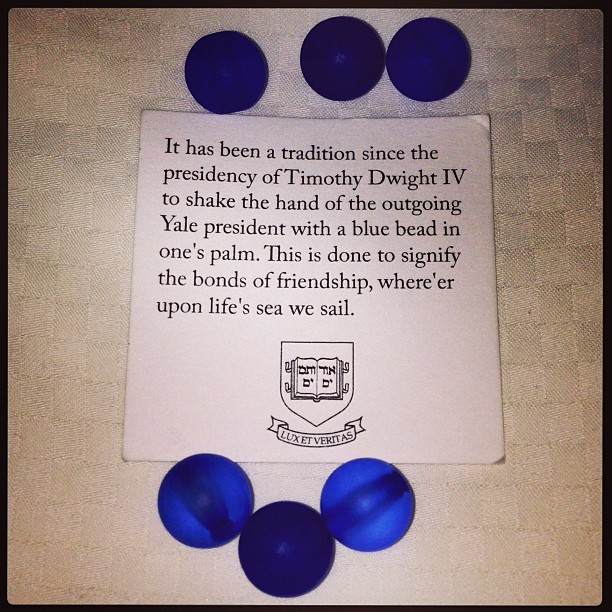 In his remarks that evening, Levin called the blue beads a “tradition.” As he knows better than anyone, in higher education all it really takes to turn something new into a tradition is to call it one. Levin might do a great deal to advance the cause of novel credentials if he can put this lesson to use at Coursera.