It seems like U2 has been on top of the world of pop music forever. But in the early 1980s U2 was just another Irish rock band. Sure, they were more popular than The Pogues, but not yet a different genus let alone, as Rolling Stone claims, “the biggest band in the world.”

A recent piece in Rolling Stone titled “U2’s ‘Bad’ Break” took me back to a seminal moment in U2’s career. As the article chronicles, on July 13, 1985, it seemed like every band in the world was either in London or Philadelphia to perform in the Live Aid concert for Africa. U2 started their 20-minute set in London at 5:20 p.m. GMT and launched into “Sunday Bloody Sunday”, the first of what was to be three songs.

But as shown here, U2 never got beyond song #2. The song is “Bad,” and from the outset it’s clear Bono intended to do something different, singing Lou Reed’s “Satellite of Love” over the jangly guitar riffs played by his follicle-challenged guitarist. (As Rolling Stone notes, this is perhaps the last time The Edge will perform without a hat. In contrast, Bono’s hair that day was plentiful and memorable.) 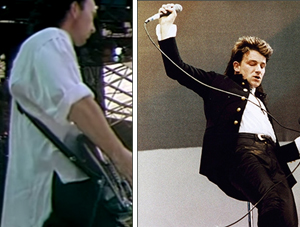 A tale of two hairstyles.

Midway through the song, Bono realizes neither his vocals nor his hair is setting the crowd on fire. So he leans forward to get closer and, at 6 minutes in, drops the microphone with an audible clunk and roams the stage seeking a way to get closer to the audience. He tries to signal to security to allow several girls on stage, but the stage is too high. 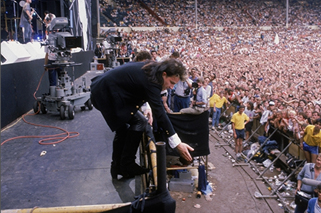 Frustrated, Bono swings over the railing and drops 12 feet to the stadium floor. He pulls a girl out of the front row, wraps her in his arms and slow dances.

The remarkable thing about Bono going walkabout, as Rolling Stone notes, is that he left the rest of the band to play on for several minutes without being able to see where he was. Adam Clayton, U2’s bass player wondered whether Bono had fallen. The Edge thought maybe Bono had decided to end the set early and head to the dressing room: “I was totally thrown, and I’m looking at Adam and Larry to see if they know what’s going on and they’re looking back at me with complete panic across their faces.” Meanwhile, all three vamped heroically, “Clayton throwing in minor but compelling variations on his bassline.”

When Bono finally finds his way to a ladder that’s been set up so he can climb back up, security has figured out how to get girls up there for Bono. There’s more hugging, kissing and 80s hairstyles. Then, realizing the band won’t have time to play their biggest hit – “Pride: In the Name of Love” – Bono incorporates another Lou Reed song (“Take a Walk on the Wild Side”) and two Rolling Stones songs (“Ruby Tuesday” and “Sympathy for the Devil”) into “Bad.”

After the set, the band thought they’d blown it. But they soon learned the opposite: everyone was blown away by Bono’s performance. It became a career-making moment for U2, establishing them in the U.S. and making them worldwide stars.

Rather than singing the hits everyone was expecting, Bono forgot about the songs, sallied forth into the crowd and got as close to them as humanly possible. (Very close, given all the hugging and touching.)

Universities that wish to thrive for as long as U2 has been at the top of the music world will follow Bono’s example and get much closer to their students. Slow dancing is not required. But finding out what students need and delivering on those needs will be. This is particularly critical at a time when higher education institutions are dropping like flies. Last week two for-profit colleges (Anthem Education and BioHealth College) joined Corinthian on the slag heap. A large number of traditional universities aren’t far behind.

No longer will being a me-too university (can I say U-too?) cut it. The leading universities of tomorrow will be less U-too and more U2.

With Ankit Dhir. Thanks to Gavin Edwards of Rolling Stone.