Bootcamps Kicking Us Towards Disruptive Credentials

While I travel a lot, I’m fairly indiscriminate when it comes to selecting airlines. I always select the lowest fare as I have frequent flier programs everywhere. Or so I thought. Last week I flew from Minneapolis to L.A. on an unfamiliar airline: Sun Country. The experience was equally unfamiliar. For the first time in months I stretched out in an empty row and – equally remarkable – the geniality of the Minnesota-nice flight attendants was entirely sincere.

But the most remarkable aspect was the inflight magazine, called Cambria Style, which appeared to be an effort to sell kitchen and bathroom counters from Cambria, a company that produces quartz surfaces. Aerosmith’s Steven Tyler is on the cover, but in a profile that focuses on his bathroom renovation and includes this priceless line “Cambria and I have a lot in common. See, we’re both in the rock business.”

So while I understood that Steven Tyler was getting a free (or heavily-discounted) new bathroom, I didn’t get the connection between this nice airline and the countertop company until I landed and looked it up: Minnesota-based Cambria bought Sun Country out of bankruptcy five years ago and now owns its hometown airline.

Good things often come from unexpected sources. It’s as true in higher education as it is in air travel. For my money, the three developments of the past decade that will have the most salutary effect on the future of higher education aren’t MOOCs or even competency-based education, but rather:

What’s more, we’re only a couple of years away from seeing major changes. Let me explain.

1. Because employers now post virtually all jobs online, the typical open position generates hundreds of applications for every open position. Faced with an inability to differentiate among candidates, employers have begun adding a host of new job requirements in an attempt to winnow the flood of applications into a manageable stream. The vast majority of these new requirements are technical. According to Burning Glass, technical skills now dominate in terms of sheer number of competencies required in job descriptions.

While these percentages are likely a reflection of the fact that it’s easier to come up with 10 technical requirements for a job than 10 different ways of saying “critical thinking” or “problem solving,” this is the reality students now face in getting in front of hiring managers as they attempt to transition from higher education to a career.

2. Over the past decade, the percentage of students who say they're pursuing postsecondary education primarily for the purpose of getting a job has increased rapidly, and is now approaching 90%. Millennial and Generation Z students are pragmatic. They value a clean interface, outcome data, the opinions of their peers, and a transparent, participatory process. When Mitch Daniels says “Higher education has to get past the ‘take our word for it’ era. Increasingly, people aren’t,” he’s referring to higher education’s current and future customers.

3. While MOOCs and competency-based education have received bigger headlines, the emergence of bootcamps that provide the “last mile” technical training demanded by employers and connect students directly to great first jobs will prove more transformative. While bootcamps are most developed in coding (91 schools graduating 18k students this year), they have already emerged outside of coding in areas such as sales (AlwaysHired) and healthcare. But what they all have in common is that they’re top-up programs: students earn their degree first, then get the requisite technical training to meet employers’ job requirements. So while many are great investments, they aren’t solving the affordability crisis plaguing higher education (with some notablenew exceptions).

What do these three developments have in common? Together, they point to a higher education future where postsecondary providers must simultaneously impart the most important technical, cognitive and non-cognitive capabilities sought by employers for entry-level positions across a wide range of professions.

Who will deliver these programs and what will they look like? Colleges and universities can get there by adding technical training to existing degree programs. And alternative providers like bootcamps can get there by expanding their programs to educate students on cognitive and non-cognitive skills. Who’s likely to be more successful? Traditional colleges and universities are hampered in two respects. First, they’re not well positioned to understand employer needs. Second, adding technical training to a four-year degree program is likely to be, at best, a marginal improvement on the status quo student value proposition.

In contrast, alternative providers like bootcamps, which don’t have to worry about cannibalizing existing enrollment and tuition revenue, are already developing programs that are likely to appeal to Millennial and Generation Z students. These disruptive programs are shorter (12-18 month), less expensive pathways that purport to equip students with foundational cognitive and non-cognitive skills, as well as specialized technical competencies, and that demonstrate application of all these capabilities in a real-world setting.

While these emerging pathways sound ominous for colleges and universities, would-be disruptors still have a major hurdle. Today’s bootcamps don’t have to worry about the credentials they’re issuing; as top-up programs, students have well-recognized credentials (i.e., degrees) before they start, and therefore aren’t too concerned. But this creates what I call the Udacity problem. Just because Sebastian Thrun says Nanodegrees are valuable credentials doesn’t necessarily make it so; employers need to agree. 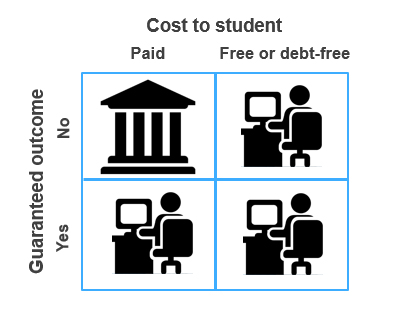 Initially, expect more focus on “free” or “debt-free” than on “guaranteed outcomes.” Income Share Agreements are already being utilized across universities and bootcamps to put “debt-free” postsecondary education within reach. In 2017, expect to see the first pathways in the top-right quadrant. 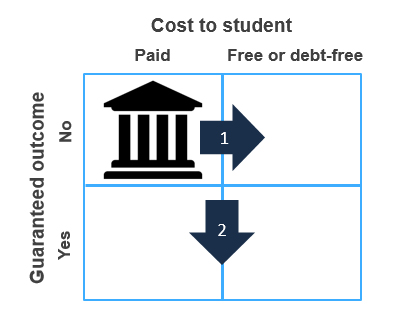 Over time, providers will begin to offer guaranteed outcomes for their shorter, less expensive pathways. Because these pathways will impart the exact cognitive, non-cognitive and technical skills required by employers (in some cases, custom-designed for them), employers will guarantee outcomes to graduates: guarantees that they’ll be able to show their stuff via a project or virtual internship; guaranteed interviews; guaranteed admission to (free) last-mile training programs (guaranteeing jobs to successful completers); or guaranteed jobs. In time, guaranteed outcomes will become the key differentiator for disruptive credentials.

While I don’t think disruptive credentials will be enrolling millions of students in two years, it’s not far-fetched to believe they’ll arrive at coding bootcamp-type numbers in that time. And if you think coding bootcamps get a lot of attention today, just wait until friends of children of New York Times editors begin choosing disruptive credentials over traditional colleges. Changes in hiring patterns and student attitudes coupled with the emergence of bootcamps mean major changes in enrollment patterns are closer than anyone thinks.

1. Saving Colleges That Are Drowning In Debt Trusteeship Magazine op-ed by Cooley’s Michael Goldstein and Jay Indyke, arguing that prohibiting colleges and universities from reorganizing under Chapter 11 bankruptcy will doom hundreds of indebted private schools that otherwise might be saved. A Chapter 11 reorganization is not a panacea. Not every financially ailing institution can be restored to health through restructuring of its debt obligations, any more than every sick patient responds to medication. But for many of the 160 independent colleges that have closed since the start of the 21st century, and for the hundreds more facing such a fate, withholding the opportunity for a cure makes no sense. Read more 2. Just Add Structure: As Valid In Ohio As New York MDRC press release announcing that three Ohio community colleges that are implementing the CUNY ASAP program are reporting initial positive outcomes. In the first semester, [Ohio ASAP] students were 17.5 percentage points more likely to enroll full time (84.6 percent vs 67 percent) —meaning that, without the program’s support, many more control group students quickly dropped to part-time status. In the second semester, students were more likely to enroll (81.7 percent vs. 69.7 percent) and more likely to enroll full time (72.5 percent vs. 48.5 percent). Read more 3. The Skill Gap In One Simple Chart LinkedIn post by Paul Petrone showing an unprecedented development in the labor market: for the past 18 months there have been more unfilled job openings than new hires. 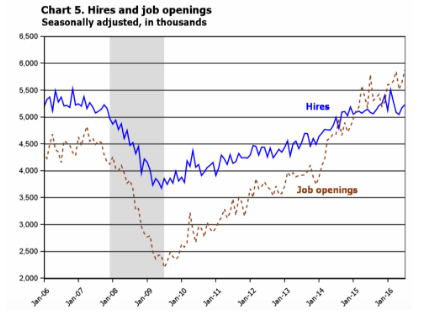