Prior to University Ventures, I created Wellspring, which ran scientifically-based weight loss summer camps and boarding schools – the first of their kind, and pejoratively called “fat schools” by the media. Working with children and their families over 5+ years, we changed thousands of lives and saved hundreds. I also experienced some unforgettable things. I saw a 16-year-old boy drink a 2-gallon jug of water in 15 seconds. I saw a kleptomaniac girl come into the camp office to steal office supplies from my desk while I was sitting there. And I've talked previously about the day a teacher ran off with a “fat school” student and made the local news.

As you might expect, there was a good deal of running off from fat school and fat camp. Mostly it was in search of fast food or junk food. You’d bet dollars to donuts (if we had donuts) that runners from our California boarding school could be picked up at the nearby Carl’s Jr. But there was one program where running didn’t pay off: Wellspring Adventure Camp. One time, two campers decided to flee into the wilderness of the Blue Ridge Mountains of western North Carolina. After hours of chase, staff finally caught them. The campers immediately defended their behavior, saying “Look how many steps we got!”

Most of all, I loved spending time at the programs, working alongside our psychologists, nutritionists, personal trainers and other professionals, and seeing the dramatic changes in the students and the positive impact on all aspects of their lives. We worked with numerous teenagers over 400 lbs., and several over 500 lbs. But I’d be remiss if I also didn’t tell you that, as a Canadian and avid hockey player, I really loved playing street hockey with students. Running circles around them made me feel like Wayne Gretzky.

One interesting phenomenon I observed was that journalists visiting Wellspring would almost always get the wrong first impression. They would look at a 15-year-old boy who was 300 lbs. and see him as a failure, and immediately make a beeline for the 14-year-old girl who was 20 lbs. overweight (an apparent success). The reality was that the girl had been at the program for two months and not made any progress at all, whereas the boy was an exemplary student and weight controller, already losing over 200 lbs. Because I could use the 200 lbs. weight loss as a metric, the reporters got it and their perception changed.

We make the same mistake in higher education. We judge success or failure on the basis of outcomes that are easy to observe. How educated is this graduate? Is she a clear fit for this job? Our best colleges and universities are defined as those that produce the best graduates, who get the best jobs, and who are most successful.

But this isn’t right. It’s possible if not likely that most of our best colleges and universities are viewed as “best” due to path dependence: their reputation attracts the best students, and the best students are going to be the best graduates. In reality, and certainly from the standpoint of matriculating students, our “best” colleges and universities should be those that produce the greatest improvement from matriculation to graduation – without regard to the absolute level of outputs.

This argument is popping up with increasing frequency. Wayne Burton, former president of North Shore Community College, was recently quoted in The Hechinger Report:

We should flip the prestige hierarchy around. For me, it’s the distance an institution brings someone from where they started to where they finish that should bring the highest acclaim. If I take a single mother in Lynn who doesn’t speak English, and she ends up with an associate’s degree in healthcare, that’s more praiseworthy than a private college that takes kids with 1600 SATs and gives them bachelor’s degrees.

Unfortunately, this is much harder to get one’s head around than it was at Wellspring. For in higher education there is no clear and compelling metric like weight loss to redirect attention from the bright and shiny absolute level of outputs.

Freada Kapor Klein, founder of the Level Playing Field Institute and a partner at Kapor Capital, has thought a great deal about this. She believes companies should focus on “distance traveled” in hiring. By asking where students started from and what hurdles they have overcome, Freada believes employers will be able to identify more successful candidates than the current output-only approach. Research backs her up. By looking at the achievement of students who grew up in modest circumstances or ability to overcome adversity, employers will get much a better sense for the grit or resilience that is highly predictive of job performance and career success (in stark contrast to “glass jaw” Ivy Leaguers who’ve never faced true adversity and may crumble at the first punch).

Getting a clear and compelling metric for “distance traveled” in higher education will go a long way to redirecting our attention and correcting our perception of our “best” colleges and universities. Last week, a report from the Brookings Institution took an important first step down this path. The report, “Beyond College Rankings: A Value-Added Approach to Assessing Two- and Four-Year Schools,” is the first college rankings or ratings based on distance traveled. It does so by distinguishing between the outcomes a college or university should expect given student characteristics (like % of students receiving Pell Grants and other financial aid, as well as imputed scores on standardized math tests), and actual outcomes.

One limitation that met with immediate criticism is that all measured outcomes are economic: graduates’ salaries and student loan repayment. To which I respond with three points. First, it would be hard to argue that a “distance traveled” metric shouldn’t include economic elements. Second, in the spirit of not letting the best be the enemy of the good, I’d gladly sacrifice comprehensive for clear and compelling. And third, while I expected the results to rank virtually all STEM-focused institutions ahead of liberal arts institutions, this isn’t what happened: colleges like Colgate, Carleton and Washington and Lee did exceptionally well, and for reasons the researchers could only call “x factors.” Students at these schools simply do better than you’d expect them to do given student quality and choice of major. Whether you think these “x factors” are from stronger alumni networks or better faculty, they probably indicate these colleges are doing important things better than most (or all) other institutions. They appear to be helping students travel further than they would have traveled had they attended other schools.

If other raters and rankers (including an important aspiring rater, the U.S. Department of Education) could pursue and improve on Brookings’ approach – for example, by using SSA income data rather than incomplete data from Payscale – we will end up with very useful metrics for “distance traveled.” More than anything else, this has the potential to redirect attention in higher education from the brightest and shiniest institutions, to the most productive and useful.

Thanks to Jessie Dean, Jude Wood, Molly Carmel and Phil Obbard for their assistance.

EDUCAUSE Review thought piece by Southern New Hampshire University President Paul LeBlanc on how college and university degree programs are about to change dramatically: “These developments are poised to end the monopoly that traditional higher education holds on postsecondary education and to erode the sole authority it has over what counts for quality and relevancy. Smart and agile institutions will respond and even thrive in this changing environment. They will do so alongside new competitors as more providers emerge to compete for students, making the higher education marketplace diverse and robust.” Read more Bloomberg article on Singapore’s new policy to discourage university enrollment, by Sharon Chen: “Lee is the latest Asian leader with an A-starred education system to try to put the brakes on, as universities turn out more and more graduates who aren’t matched to the jobs available. A few years ago, South Korea said it may close some higher-education institutes amid what then-President Lee Myung Bak called ‘reckless university enrollment.’” Read more Inside Higher Education report that Kaplan University will provide “double-click” degrees for its graduates i.e., transcripts that permit employers to view achievement at the level of the competency, by Paul Fain: 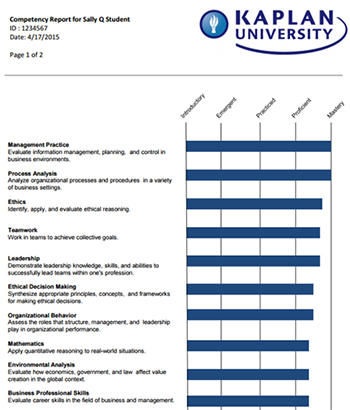 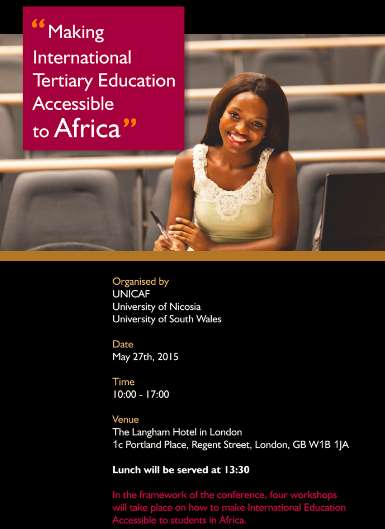 If you are interested in attending this conference in London as a guest of University Ventures, please e-mail anna@unicaf.org