As we walk around our neighborhood, my youngest son (4 years old) invariably asks the same question. He points at an electrical line and asks: "Is that a zip line?"

My eldest son laughs and tries to explain to his brother that it’s an electrical line and THERE IS A BIG DIFFERENCE. Amused, I add only two things to the conversation. First, I comfort the 4-year-old that this is a common mistake. And then I repeat the old adage (and do my level best to convince the boys that this actually is something people say): “Before you zip, make sure you won’t get zapped.”

I expect my kids will grow up with uncommon wisdom, as well as uncommon misconceptions.

Sometimes things that are very different look the same. This is particularly true if you have myopia, which my kids surely will because both my wife and I are blind without our glasses. It’s certainly true in postsecondary education, where colleges and universities are suffering from not one but two forms of myopia.

I’ve been talking about myopia – the tendency to mistake our most elite institutions for the entire system of higher education – for years, and specifically how the isomorphism it engenders is pernicious given the great diversity of the system. With many more institutions serving first-generation students than elites, and with abysmally low completion rates at these institutions, it is difficult to believe that the best way to organize programs and resources at non-elite institutions is to mimic the elite. When our greatest strength is our diversity, myopia is causing our colleges and universities to look too similar for their own good, which results in a level of system productivity (i.e., student outcomes per unit of input) that should be unacceptable.

A new study published in Science Advances shines a light on a cause of this myopia. The study surveyed faculty across North America and determined that only 25% of universities account for up to 86% of tenure-track faculty. Specifically:

Tenure-track faculty members are coming predominantly from truly elite institutions; in history, the top 10 universities produce three times as many professors as those ranked 11-20.

It may be that a major source of myopia is that a large number of faculty at non-elite institutions wish to recreate the university they attended. They know firsthand what excellence looks like, and they have no intention of compromising, even if compromise or a different model altogether would provide better outcomes for the students they serve.

Short of a Ted Cruz victory in 2016, which could result in mass faculty flight to Canada, there is no scenario in which the makeup of tenure-track faculty across our system of higher education changes in any meaningful timeframe. Nor is it clear that doing so would result in unmitigated good. Why shouldn’t students across our diverse higher education landscape be taught by the most talented faculty?

But what might help is to give faculty a better perspective. The prevailing perspective on postsecondary education is that the entire enterprise is indistinguishable from the work of colleges and universities. But that proves to be myopic as well. A recent report by Tony Carnevale and the Georgetown Center on Education and the Workforce provides a broader perspective. In total, colleges and universities represent $407B of the $1.1T spent on postsecondary education, or only 37% of the total. 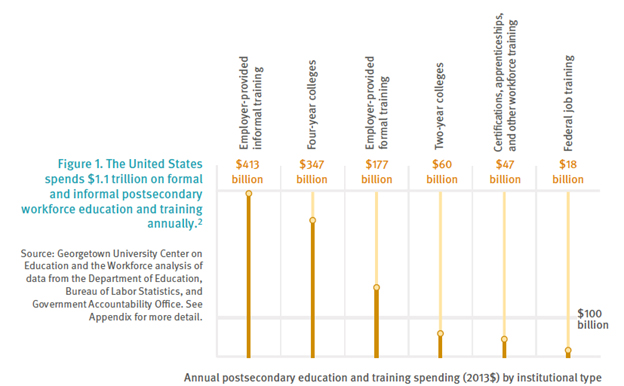 Spending on training provided by employers is nearly 50% greater than all college and university spending. And broken down by age group, while colleges and universities dominate total postsecondary spending for young adults, they account for less than a quarter of total spending on adult education and training.

While we don’t see employer training increasing rapidly over the next several years, certifications, apprenticeships and other workforce training – alternative credentials – are areas where we are seeing rapid growth, both onground through companies like Galvanize, and online. College and university market share for young adults could well decline.

Colleges and universities would be more effective and competitive if all stakeholders had the benefit of a broader perspective. With better vision, most colleges and universities would structure themselves differently in order to produce better student outcomes, and to do so more efficiently. And they would do a better job of coordinating with other players in postsecondary education – most notably employers, but also government. The result would be a much wider array of delivery models and business models.

Every few weeks, some institution – typically a community college – makes a big deal out of a new academic program that involves coordination with an employer. The employer is either involved in curriculum development, or has promised to hire students who complete the program, or both. The project is typically supported by federal or state funding. And then we rarely hear about it again. It’s neither scalable nor replicable.

Don’t mistake these one-off instances of coordination. As my 4-year-old taught me, sometimes things that are very different look the same. Our colleges and universities are generally as reluctant to engage employers as employers are to allocate resources to pre-hire training. But colleges and universities owe it to their tuition-paying students to bridge this gap. We shouldn’t have to live in a world where every instance of coordination between employers and colleges is publicized and celebrated. That should be the norm. And it can be if we correct our vision.

Two Federal Reserve Bank reports – the first from Fed St. Louis, the second from Fed New York – indicating the severity of the student loan crisis. According to the St. Louis report 31.5% of borrowers who are required to repay their loans are at least a month behind on their payments – nearly 4x higher than the percentage of Americans who are behind on auto loans. And according to the New York report, the number of active borrowers from low-income zip codes has declined between 30-40% from 2010 to 2014, probably due to the experience of low income borrowers during the recession: “We find that about half of the 2009 cohort are demonstrating problems paying back their loans (having either defaulted, gone delinquent, or paid down none of their balance); these troubled borrowers, however, are dominated by borrowers from the lower-income Zip codes, where 70 percent of borrowers have had some sort of repayment problem.” Fed St. Louis report Fed New York report Bloomberg article on the impact of Sweet Briar’s announced closing on trading in the bonds of other small private colleges: “At least 22 colleges with fewer than 4,500 students and rated at best three steps above junk have seen trading in their bonds leap since March 3, when Sweet Briar said it would shutter in August… ‘What it comes down to is: Why does this school exist?’ said John Bonnell, who helps oversee $10 billion of munis at USAA Investment Management Co. in San Antonio, including Sweet Briar bonds. ‘What sets them apart? We view the whole sector very cautiously.’” Read more FastCompany article on popular Stanford course Designing Your Life that updates character education for the 21st century with “design thinking,” by Ainsley O’Connell: “After the Civil War, mandatory chapel disappeared, academics rather than ministers became university presidents, and courses like "Evidences of Christianity" vanished from the required curriculum. ‘Universities didn’t think they would necessarily be abandoning the moral aspects of students’ education,’ says Julie Reuben, a Harvard professor who studies the history of American higher education. ‘Instead, they believed that freely chosen activities were more powerful than externally forced activities.’ But, to the chagrin of university leaders, many students abandoned religion and instead embraced extracurricular outlets like athletics and fraternities, which in their own way took on the function of character-formation… The success of "Designing Your Life" suggests that students may be ready to revisit that earlier university model, with conditions—conditions that design thinking is perhaps well-suited to address.” Read more
Please consider casting a vote for

Nominated for Seattle “Newcomer of the Year” by