Employerland: What Universities Can Learn from La La Land

It’s a game I play every time I attend a higher education conference. It’s kind of like tracking Bigfoot, or trying to find my 11-year-old son when he’s used up his allotted screen time and is hiding somewhere with his mom’s iPhone. It is, of course, the Hunt for Employers.

In the market for talent, colleges and universities provide “supply,” while employers represent “demand.” But at college confabs, employers are inevitably elusive – even at gatherings that focus on the so-called skills gap. While I sometimes run into representatives from the Walmart or Albertsons foundations, I never see anyone from Walmart or Albertsons – certainly not Human Resources decision makers.

This is a shame. Because, as a result, a lot of what passes for dialogue on these crucial topics is actually a monologue. Don’t get me wrong: higher education is plenty good at talking to itself. But without a “demand-side” interlocutor to engage on crucial topics like how degrees and other credentials are interpreted and valued and actual hiring screens and processes faced by graduates (and drop-outs!), it’s hard to imagine how we’ll materially improve outcomes for students.

Desperate for good dialogue, I turned to the near-Academy Award winning dialogue from the 2016 film La La Land, which turns out to have a lot to say about how Millennials relate to employment and employers. So let’s let La La Land take us on a trip to Employerland.

In Employerland, new college graduates may be invisible. In the song “Someone in the crowd,” Mia’s roommates tell her that unless she distinguishes herself from just someone in the crowd, potential employers are unlikely to know her name. Then after Mia’s audition where her great performance is ignored because an assistant appears in the window with a message, she walks back to the waiting room and then to the elevator, where all the other candidates look exactly like her.

This is generally true for Millennials. With hundreds of applications for each open position, Millennials are invisible and undifferentiated to human hiring managers unless they distinguish themselves – most effectively by fooling keyword-based filters of employers’ Applicant Tracking Systems.

In Employerland, college graduates need technical skills. In auditioning for roles as a doctor and police officer, Mia has to master and recite technical jargon.

As a result of the proliferation of technical skills in job descriptions across all sectors of the economy, Millennials often have no shot at fooling Applicant Tracking Systems for a given position unless they claim the specified technical skills.

In Employerland, even if they see you, employers may not pay attention. As Mia says: “I’ve been to a million auditions and the same thing happens every time. Where I get interrupted because someone wants to get a sandwich. Or I’m crying and they start laughing.”

Too often, hiring managers are distracted by non-predictive and inconsequential criteria such as pedigree and degree rather than hiring based on evidence like work products or skills-based assessments.

In Employerland, college graduates need soft skills. Seb fails to demonstrate appropriate soft skills at the restaurant when he refuses to stick to the playlist. As a result, he loses his job.

Too many employers are convinced Millennials lack requisite soft skills like organization, decision-making, communication, goal-setting, and even punctuality. Although some of this is a result of defects in the way employers hire, it’s up to Millennials like Seb to disabuse employers of this illusion.

In Employerland, grit may be the most important skill. Mia and Seb reach the point of crisis following Mia’s failed one-woman show. She says she’s done embarrassing herself and is going to go home for a while: “I’m done. I’m done.” She goes back to Arizona to live with her parents.

This is particularly hard for Millennials who, more than prior generations, have followed prescribed curricular and extra-curricular paths through school without incident, only to find a limited number of clear pathways to careers (law, consulting, investment banking) and none in the most dynamic sectors of the economy such as tech, biotech and healthcare. Grit is often the difference between finding their way to a professional career and giving up.

In Employerland, jobs determine status for Millennials. When Seb finds out Mia’s an actress and asks if he’s seen her in anything, she replies: “The coffee shop. On the Warner Brothers lot. It’s a classic.” To which Seb responds: “Oh I see. You’re a barista. Then I can see how you could then look down on me from all the way up there.”

While Millennials no longer face the record-high underemployment that their older siblings did during the Great Recession, a good first job in a growing sector of the economy remains elusive for far too many. 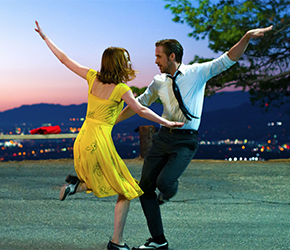 If you had a good first job, you could learn to dance like this, too.

“Somewhere there’s a place where I find who I’m gonna be.” - Mia

“You could just write your own roles. Write something that’s as interesting as you are.” - Seb

"The public, often all they care about is jobs." - Terry Hartle, Senior Vice President, American Council on Education

When I was a teen, I dreamed of self-actualization in college: What school will I attend? What will I major in? But higher education doesn’t play a role in La La Land. Mia is a college dropout and Seb’s educational background isn’t mentioned. For Millennials, it’s about jobs, not college – the destination, not the way-station. Millennials are practical and not only not afraid to begin real life, but eager to do so.

So it’s noteworthy that, after painting a bleak picture of Employerland, La La Land spins a true Hollywood fantasy: The best way for Millennials to deal with the many challenges of Employerland is to hold out for jobs that are self-actualizing. Then everything will work out fine. Mia gets her unlikely break as a result of a casting director actually paying attention at her one-woman show. Seb is broke but adamant that he’s going to save jazz by opening up his own club: “[Jazz is] dying. It’s dying, Mia. It’s dying on the vine. And the world says, let it die… Well, not on my watch!”

Unfortunately, this Hollywood ending (albeit at the cost of Mia and Seb’s relationship) is at war with La La Land’s overarching message. Millennials are unquestionably more passion-driven than prior generations. But for most, facing the aforementioned challenges of Employerland along with a workforce that is shifting rapidly to contingent work and contractors, if they’re dreaming it’s probably about a real job with a real employer rather than self-actualization.

A good first job in a growing sector of the economy is the Hollywood fantasy too many young people are failing to realize as a result of changes in hiring practices and the failure of colleges and universities to adapt. So one more thing young people have in common with Land’s: they know what it’s like to think they’re about to win a big prize, only to lose it in preposterous fashion.

1. College Disrupted EdSurge report on launch of MissionU, the first faster + cheaper pathway to good first jobs, by Jeffrey Young. A venture-backed company today announced a new educational offering billed as an alternative to the standard undergraduate experience. It will last only one calendar year, feature a curriculum designed in close coordination with well-known employers, and cost nothing—at least at the outset. Students who attend, however, must promise to give up 15 percent of their incomes for three years once they land a job that pays $50,000 or more. Read more 2. The Coming Revolution In Student Financing The Atlantic article on Income Share Agreements, a new form of student financing poised to displace high-cost last-mile financing (PLUS loans, private loans) while providing market-based ROI signals to students, by Amelia Friedman. “These college-backed ISAs have the brand of the college behind them, and it’s the college saying that ‘We believe in our programs, we believe in our education, and we believe you’ll be better for it as a cohort,’” said Zakiya Smith, the strategy director of the Indiana-based Lumina Foundation and a former senior policy adviser for education in the Obama White House. “It’s essentially colleges putting their money where their mouth is.” Read more 3. Reimagining The Cost And Value Of College American Council of Trustees and Alumni podcast with Daniel Pianko, Managing Director of University Ventures, reviewing the landscape of higher education innovation in student financing and streamlining the path from graduation to the all-important first job.
Read more