Fooling All The People All The Time

Probably the least secret “secret society” at Yale is the Pundits. Founded in 1884, the Pundits are Yale’s senior pranksters. When students run naked through the library, it’s probably the Pundits. My brother Aaron was tapped as a Pundit and I’m grateful I’d already graduated and was a hundred miles away when I began hearing stories of his nude cavorting.

On occasion, the Pundits put more thought into their pranks. Like the time they called students shopping Jonathan Spence’s perpetually oversubscribed course on the history of modern China to say they could improve their chances of getting into the class if they brought woks or kung fu movies to the first discussion section. Or the time they sent notes to 10 students named Sarah that read: “Dear Sarah, I am a secret admirer. Meet me at the Atticus Bookstore children’s section this Thursday at 7 p.m. Love, Dan.” Then they sent the same note (in reverse) to 10 students named Dan. Ten Dans and Sarahs showed up that Thursday. It didn’t take long for the Dans and Sarahs to figure out they’d been fooled.

One prank that took longer than you’d think for the victims to figure out occurred two years after my brother had graduated. We were back at Yale for law school and the target of an urgent Pundits request: did we know any law students who were older and who could do a passable German accent? As a matter of fact, we did. Chuck Lane, a writer at The New Republic, was attending the Law School as Knight fellow, a scholarship for working journalists seeking training in the law. He was a few years older, had been Berlin bureau chief at Newsweek, had a German wife and was cantankerous enough to be interested in playing an elaborate joke on undergraduates. We called Chuck and he was in like Martin for the event that was to transpire the next day.

The thrust of the prank was to waste the time of those whom the Pundits viewed as deserving of having their time wasted: students interested in investment banking. The Pundits littered the campus with posters inviting students to come to an informational session for “Banque Hautinger,” a private Franco-German investment bank with an exclusive clientele. About sixty students arrived and found a German banker (Chuck) prancing around the auditorium stage:

He then proceeded to construct an elaborate analogy comparing investment banking to going to war. Sometimes your colleague dies. But you still need to march forward. It was downhill from there. Chuck began to point to students asking if they had brought resumés as the posters had requested. To a student whose resumé said he spoke Japanese and majored in Economics, Chuck barked: “Say something smart in Japanese about economics.”

The amazing thing is that no one left. Everyone wanted to believe the simplest explanation: that this was a real (if eccentric) investment bank with real jobs. At the end, Chuck invited students to have a drink with him and other Hautinger professionals at Mory’s, the Yale club. The fooled students who showed up found Chuck and the Pundits in a private room, completely naked. With the Pundits, somehow it always ended with disrobing.

Speaking of college students disrobing, the new face of the college affordability crisis is Miriam Weeks, a sophomore at Duke who claims high college tuition led to her involvement in the adult film industry. Adopting the stage name Belle Knox, Miriam has now made several adult films and recently spoke at the UNC Chapel Hill Student Union where she reportedly said: “I felt that being screwed on camera was the best way to avoid being screwed by the higher education system.” As Miriam wrote in Time:

Officials at my school responded that $60,000 is a bargain — they actually spend $90,000 a year on each student. Let’s break that $90,000 down. Building and maintaining physical infrastructure on campus gets $8,000. Another $14,000 goes to pay a share of administrative and academic support salaries, which in Duke’s case includes more than $1 million in total compensation to the university president, Richard Brodhead, and more than $500,000 to the provost, Peter Lange, according to 2011 tax filings. Also, $14,000 goes to dorms, food, and health services; $7,000 goes to staff salaries for deans and faculty; and miscellaneous costs take up another $5,000.

As with Banque Hautinger, it’s tempting to believe the simple explanation that rising college tuition is forcing students into adult entertainment. But the truth is more nuanced. In Miriam’s case, Duke calculated the incoming freshman’s financial aid package based on her father’s income as a doctor with his own practice. When he was called by the Army Reserve to go to Afghanistan, either Miriam didn’t ask Duke to recalculate her financial aid package or Duke refused to do so mid-year. (Neither party has issued a clear statement on the matter.)

Miriam Weeks is where the college affordability crisis has jumped the shark. While her analysis of Duke’s spending isn’t off-the-mark, the resulting media frenzy fools us into believing that students at private universities must fall into three categories: (1) Rich; (2) Indebted to the tune of hundreds of thousands of dollars; or (3) Adult film actors. Meanwhile, the average college graduate who has taken out student loans leaves with $30k in student loan debt. But as Hamilton Place Strategies correctly points out, $30k does not make a compelling news story: 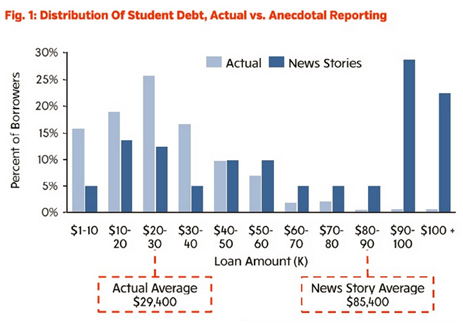 Someone who’s not fooled about this issue is Secretary Duncan himself. Here’s what he had to say at the Aspen Ideas Festival in early July.

Duncan: If you have reasonable debt and you're getting a college degree, that debt is probably worth it, because it has been demonstrated that a college degree is still the best investment you can make. But if you have inordinate debt and no degree, you're in a worse situation than where you started.

Question: Are you comfortable with that person having $30,000 in debt?

Miriam Weeks is a sideshow. By far the most catastrophic part of the college affordability crisis is students who drop out with debt. According to the National Student Clearinghouse Research Center, over 31 million students dropped out in the past 20 years without earning a degree. One-third dropped out in their first semester. Eighty percent of other drop outs were gone in the next three semesters.

But this is a much more involved story that involves student motivation, aptitude and preparation as well as college and university resources allocated to instruction and retention. It’s not simple. And it’s not sexy. As a result, we continue to be fooled as to the real issue.