If The Onion was your only source of news last year, this report would have told you everything you need to know about the state of higher education: 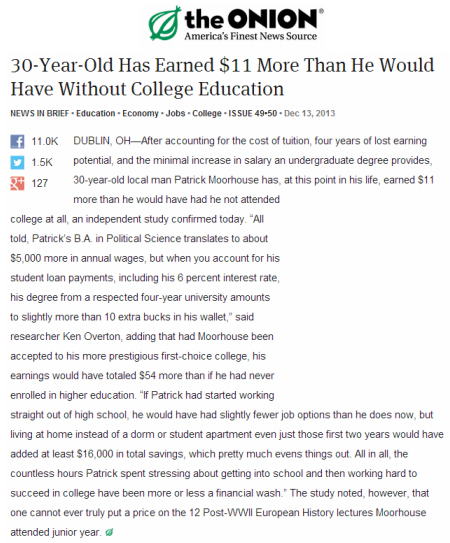 Two years after Occupy Wall Street evolved into Occupy Colleges, the Onion report exemplifies the classic formula “tragedy + time = comedy.” But recent graduates aren’t laughing. Average student debt for 2012 graduates was $29,400 – up 25% from 2008 graduates and, according to some studies, exceeding their average starting salary. That is, if they find a job. Counting those who have given up looking for work, unemployment for young adults under age 25 is over 20%. Most tragic: according to the Georgetown University Center on Education and the Workforce, millennial college graduates won’t earn the national median income of $42,000 until they turn 30, on average – four years later than their parents.

The impact on the 14M Americans under the age of 30 with student loans will be dire. One recent Demos study calculated a lifetime “wealth loss” of $4 for every $1 in student debt at graduation. One such young American is John Connelly, a 22-year-old son of a New Jersey auto mechanic and the first in his family to attend college, profiled earlier this year in the Wall Street Journal as one of “The Young and the Jobless.” Despite excelling at Rutgers, John withdrew in his final year, wary of taking on more debt, and last summer found himself $21k in debt and sleeping on friends’ couches.

For John and his contemporaries, attending college seemed like a good idea at the time. Funny enough, that’s what Wang Wei, a 41-year-old woman in rural China and the subject of a recent article in The Economist, thought when she was invited to two weddings on the same day. After all, who doesn’t enjoy a good Chinese wedding? The 15-course banquet, including the many “mystery” courses (impossible for a Westerner to discern genus and species), followed by delicious deserts like moon cake filled with sweet red bean and salty egg yolk, and the not-to-be-missed white gelatin with canned fruit.

The problem for Wang Wei, according to The Economist, was not gustatory, but rather red envelopes. That week, her cash outlays exceeded her monthly income, a result of a gift inflation that has far exceeded income growth for low SES Chinese. From 2005-2009, average gift amounts in three rural villages in Guizhou, a poor southwestern province, increased 18-45% each year, resulting in average share of income allocated to gifts more than doubling from 8% to 17%.

The cause is the public nature of gift giving at weddings: guests line up and the amount in their red envelope is recorded. No matter your status or resources, the expectation is that you’ll give at the market rate. And if you’re close to the couple, you must add a premium. So the choice for wedding guests is clear: give or be publicly shamed. The result is that income that could go to buy a water heater or fridge for Wang’s family is instead going into red envelopes.

In theory, happy couples should benefit, but, in turn, they’re the victim of rampant banquet inflation. Some wedding banquets cost the hosts much more than they collect in gifts. Ironically, weddings held to provide couples with the resources to start out in life are holding families back and increasing inequality. The beneficiaries are the banquet halls.

The parallels to higher education are stomachache-inducing. In America, the winners are the Chinese banquet halls of education: colleges and universities. For young people, the choice is to earn a degree or be publicly shamed. Tuition inflation far in excess of income growth has made this choice harder and harder. But like Wang Wei who estimates she’ll give more in red envelopes this year than she earns and will have to borrow to make up the difference, most young adults continue to mortgage their future.

Our greatest concern should be the American Wang Weis: low SES young adults like John Connelly. Pre-recession, they were already contending with falling need-based aid at the expense of merit-based aid (i.e., aid doled out to students who have a positive impact on input-based metrics like GPA and standardized test scores that are the bread and butter of college rankings). They were dealing with a maximum Pell Grant (then $4,310, now $5,550) that was a mere drop in the total college cost bucket. And they received 38% less from parents and personal savings than middle income students and made up the difference by borrowing more. And back in 2006-7, 54% of qualified low SES students enrolled in a four-year college (compared with 84% of qualified high SES students).

So when the National Student Clearinghouse reported in December that under age 25 enrollment at four-year for-profit colleges dropped a shocking 14.7% last year, I’m thinking the John Connellys of the world have figured out that attending the Chinese wedding may not be such a good idea. Fear of debt now exceeds the shame of not having a degree. As with many trends in higher education, it starts with overpriced for-profit colleges, but within a surprisingly short period of time, most similarly priced traditional colleges will be seeing similar no-shows. The recent Inside Higher Education laundry list of private colleges with fall 2013 enrollment shortfalls is just the beginning.

The impact on higher education will be greater than simply financial. It will also significantly impact student diversity. But the larger impact will occur beyond college campuses. While students are opting out as a result of fear that debt will limit their social mobility, they are choosing between two bad options as social mobility will be limited from their lack of credential.

But while Wang Wei will continue to find herself in a wedding-induced debt sinkhole, we take an optimistic view of American higher education as we begin 2014. Unlike in China, there are few cultural barriers to change. Some colleges and universities are already moving – often in conjunction with like- minded private sector partners – to offer less expensive, higher return credentials. And within a few years, technology and newly available data will make degree-based hiring seem quaint.

Higher education will innovate through this mess. Not all banquet halls/universities will make it, but those that do will do a better job of serving guests/students. Among other things, I hope this means better desserts.

Happy New Year! May 2014 be a year of innovation for your institution.