You Say You Want a Revolution? "Just-In-Time!"

The trope of overlooking the hero based on appearances goes back as long as stories have been told. In the Bible, King David, the youngest and least impressive of his 7 brothers, was relegated to the fields to look after goats and sheep. Samuel thought David’s brother was the impressive one and should be king. But God said: “Don’t judge by his appearance or height. People judge by outward appearance, but the Lord looks at the heart.”

Height rears its head again in Star Wars when Luke encounters Yoda for the first time:
Yoda: Help you I can. Yes, mmm.
Luke: I don’t think so. I’m looking for a great warrior.
Or maybe that was less about height, more about being green.

Other heroes overlooked for superficial reasons include Superman (bumbling Clark Kent), Rocky (a bum), and Lassie (a dog). And now, in an example of life imitating art, colleges and universities are not just a place to study this trope; they have fallen victim to it. Based on misleading appearances, higher education is paying insufficient attention to alternative “Just-In-Time” providers.

Coding bootcamps – the first manifestation of “Just-In-Time” (JIT) providers – are experiencing remarkable growth. One recent survey projected 138% growth from 6,740 graduates in 2014 to a 16,056 2015 – greater than any other sector or program in postsecondary education. But searches at the Chronicle of Higher Education and Inside Higher Education on market leaders like General Assembly and Galvanize produce articles on the South Carolina General Assembly and confederate flag debate –nothing about coding bootcamps or JIT education. And only one accredited university has seen fit to partner with a JIT provider: University of New Haven’s partnership with Galvanize on an M.S. Engineering in Big Data.

If colleges and universities expect they’ll be selling as many degrees a decade from now, they should take a look at what’s happened in the software business. Enterprise software was often called “bloatware” by its detractors because it included so many functions that customers rarely used and came with a big price tag for a one-time purchase, followed by annual maintenance fees. Degree programs are the higher education equivalent of enterprise software: a big price tag for a one-time purchase, followed by annual alumni contributions. Enterprise software is dying as leading software companies have shifted to Software-as-a-Service (SaaS) models that allow customers to rent software per user per month and pay only for the functions that they need. JIT providers are doing exactly this: shifting from the bloated degree model to an “Education-as-a-Service” (EaaS) model. JIT sells students what they need when they need it. Just as the goal of SaaS companies is to win and profit from customers for life, JIT providers aim to serve their students for life, providing a range of programs and credentials as students’ needs evolve over time.

Rather than focusing on the big picture, colleges and universities are overlooking JIT for three superficial reasons:
1. All the successful examples of JIT are coding bootcamps, ergo the trend doesn’t extend beyond coding.
2. JIT is new version of “Do-It-Yourself” (DIY) education. As DIY hasn’t had any impact, we have nothing to worry about.
3. These programs aren’t alternatives to colleges and universities, but rather “Top-Up” programs for students who’ve already earned bachelor’s degrees.

We’re already seeing examples of JIT programs that demonstrate how flawed these assumptions are. Take YearUp, for example. YearUp is Boston-based not-for-profit that provides JIT pathways to a professional career for underprivileged students. The program combines 21-week educational programs in several functional areas – IT, operations and finance, sales and marketing, and customer service – with a 26-week internship at employer partners. All programs involve IT to some degree, but are not limited to coding. Moreover, YearUp is about as far as you can get from a DIY program; the 26-week internship is guaranteed if students complete the educational program, students receive a stipend for living expenses and are on a strict behavioral contract (with meaningful attrition during the 21-week program). And YearUp is definitely not a “Top-Up” program for students who’ve already earned degrees. The program serves students who otherwise can’t access or are unlikely to succeed at traditional colleges. Now in 14 cities, YearUp serves over 2,500 students each year and 85% of alumni are either employed or in college within 4 months of completing the program: placement rates that are much closer to JIT “Top-Up” programs for graduates of elite colleges than community colleges that serve other low-income students.

There is one, non-superficial reason why colleges and universities might dismiss JIT as a flash in the pan: lack of breadth of the educational program. Like the German vocational/apprenticeship model, or – closer to the U.S. model of higher education – the English university model, students specialize immediately. JIT has no time for general education, let alone distributional requirements. While any impact on quality of life, citizenship and civility remains unclear, evidence seems to indicate that students are unlikely to be worse off economically from early specialization. University of Chicago economist Ofer Malamud developed a longitudinal model comparing outcomes for English (early specialization) and Scottish university students and found that while early specialization is associated with more costly switches upon entering the labor market, differences in wages or employee satisfaction do not persist over time. And with regard to non-economic factors, if JIT providers primarily serve the 46% of students enrolling in but not completing degree programs, any non-economic impact is likely to be positive.

The U.S. Department of Education (ED) is well ahead of our colleges and universities in recognizing the potential of JIT. As the Chronicle has reported, ED is now considering a pilot for universities to partner with JIT providers, allowing Title IV financing for select JIT programs. Based on a recent experience moderating a panel discussion at a conference, where the two participating JIT providers indicated they preferred serving students who already had (expensive) degrees, ED is absolutely right in believing that availability of Title IV funding is key to not only making JIT an affordable alternative for students, but also to opening the eyes of JIT providers that they can be a lot more than “Top-Up” programs for graduates from elite colleges.

Once ED announces this demonstration project, higher education institutions should pay a lot more attention. That’s good, because we need them to solve one real (not superficial) limitation on the JIT model: the lack of a recognized credential. While some JIT providers publicly state that “the credential is the job,” that’s insufficient in a labor market where degrees remain the reserve currency. A much better response is to do the work of articulating JIT programs to recognized credentials, as Lumina Foundation is attempting. When asked by an employer what a JIT course means, much better to say you’re ¼ through a bachelor’s degree program at a recognized higher education institution. By insisting that JIT providers partner with Title IV-eligible institutions, this should be one outcome of ED’s demonstration project.

It also opens up the door to a new revenue model. Remember the great line from The Blues Brothers: “We got both kinds [of music]. We got country AND western.” In the same vein, college and universities “got both kinds” of revenue: tuition AND fees. Unfortunately, both come from the same source: students. JIT providers like YearUp are already generating revenue from a completely different source: employers. YearUp does not charge tuition to students. The entire program is paid for by employers. Most employers are happy to pay for placement if they can be certain they’re hiring qualified employees trained to be productive from day one. In helping to open up this important new revenue stream for colleges and universities, JIT will go a long way to helping to end the stifling and unproductive isomorphism that afflicts our colleges and universities.

If JIT is able to accomplish any of this – let alone all of the above – it will be a true hero: greater than Yoda, Superman, Rocky or even Lassie.

#1 New York Times article on Brooklyn Law School decision to repay 15% of total tuition paid to students who have not found full-time jobs nine months after graduating, and Daily Mail article on a Chinese university going one step further and becoming a “full-stack” higher education provider by selling graduates to employers. New York Times
The introduction of the program, called Bridge to Success, comes as law school graduates across the country face increasing competition in a depressed job market that is only slowly recovering from the economic downturn. “This builds on [our] approach… [to] be very student-centric, to listen to what students need,” said Nicholas W. Allard, dean of Brooklyn Law School. [The] executive director of the National Association for Law Placement, said Brooklyn Law School’s program struck him as unusual, though… other law schools were trying different ways to help students navigate a challenging job market. “It’s a time of experimentation and risk-taking for law schools.” Read more

Daily Mail
He Hua, 39, the dean of Kunming University in south west Yunnan, has set up a store on the digital marketplace Taobao where employers can browse and 'buy' the young graduates. The 'Kunming University talent shop' showcases the university's top 65 graduates, who each have an online 'profile' showing off their talent. All of the graduates are wearing white t-shirts bearing the Kunming University logo. The students are divided into four categories: 'along the way style,' '2025 style,' 'internet style' and 'elite collection style.' Clicking on each person's photograph reveals more about their character and skills… If a company is interested in hiring any of the graduates they must pay the university 1,000 Yuan (around £100) to 'capture', or reserve, the talent. Read more #2 National Student Clearinghouse Research Center report sponsored by the Lumina Foundation showing that 37.2% of students who entered college for the first time in fall 2008 transferred at least once within six years (45% of these transferred more than once) – demonstrating just how crazy it is that in an era where we can track every click and purchase, we rely on a voluntary clearinghouse that does not cover 100% of U.S. college enrollments to track something as important as college transfers. Two-year public institutions had a transfer rate of 39.5%, including a small percentage (3.9%) of students transferring after receiving a credential at the starting community college. Among those who started at four-year institutions, those who started at four-year public institutions had the highest transfer rate (36.5%) followed by those who started at four-year private nonprofit institutions (34.3%) and private for-profit institutions (22.9%). Read more #3 Chronicle of Higher Education article on National Association of College Stores survey estimating that student spending on textbooks declined 12% from 2013-14 to 2014-15, by Jeff Young: The decrease is due in part to the rise of textbook-rental programs, which cost less, association officials note. But of those students who did not buy textbooks, the report noted, a greater percentage than in the past said it was because “they believed them to be unnecessary…” A separate survey of professors on the same campuses, meanwhile, found that they almost never see the course materials as optional. "What we think is happening is students are waiting to see how much the material is used before they buy them.” Read more 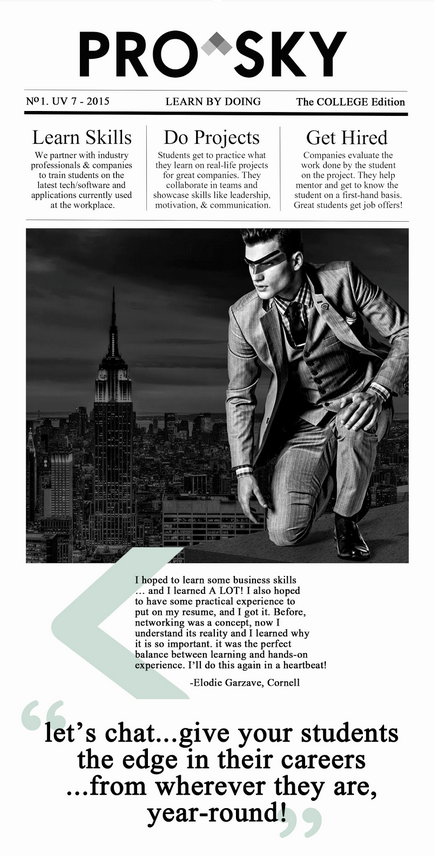