Long Road Out Of (Olive Garden Of) Eden

I left my home in Canada to live in the United States, drawn by America’s great universities and by a belief that free markets were preferable to Canadian monopolies on sales of beer and donuts. So one thing that continues to puzzle me is how universities in the land of the free manage to keep pricing virtually all degree programs the same.

According to Tony Carnevale and Nicole Smith at the Georgetown Center on Education and the Workforce, STEM bachelors degrees have consistently outperformed non-STEM degrees by 10-30% in terms of mean income for adults ages 21-54 for nearly 50 years. The gap narrowed from the mid-80s to the late 90s, but has now returned to historic levels of 20-25%. 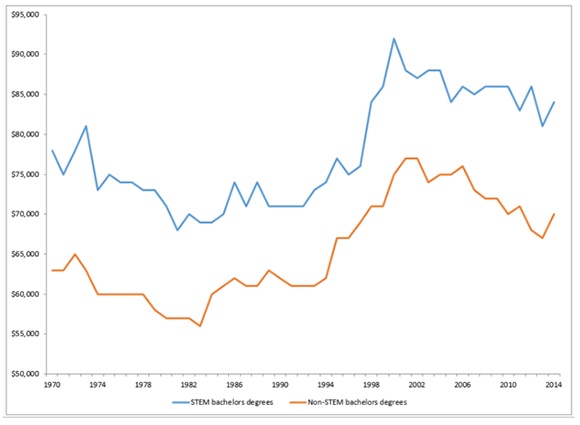 How can universities continue to charge the same price for STEM and non-STEM degrees? It’s a knotty, tangled problem. Not unlike a bowl of my favorite food…

“This is America, not France. We think
‘noblesse oblige’ is a new entree at Olive Garden.” - Chuck Rhoades, Billions (new show on Showtime)

My belief in free markets is equaled only by my belief in pasta. I love pasta and could eat it at every meal. So I was flabbergasted to find that America’s most popular Italian restaurant was Olive Garden.

I couldn’t believe this was what Americans thought this was what pasta was supposed to taste like. It was overcooked and tasteless, as if Olive Garden had stopped salting the water (the cardinal rule of cooking pasta). The sauce was ladled overtop and as a result dishes were of an uneven temperature. Not surprisingly, Olive Garden wasn’t laser-focused on pasta; the menu included burgers and fries and Spanish tapas. The geniuses at Olive Garden had also added “authentic” Italian items like fried lasagna bites (alongside fried foods of every stripe), and “Tuscan” white bean hummus. Perhaps to compensate, they invented Italian-sounding dishes like “pastachetti” and “soffateli.” Then there was the vegetable lasagna topped with chicken, which boggled my mind: if I wanted meat, why not order the regular lasagna? Even the free breadsticks for which Olive Garden was known were lousy; they tasted like hot dog buns. I wasn’t surprised to learn that Olive Garden’s claim it operated its own cooking school in Tuscany was bunk.

Naturally, I was surprised when Olive Garden promoted its “Never Ending Pasta Pass” a few years back, allowing patrons to eat all the pasta they wanted for seven weeks for only $99; like a pie-eating contest where first prize was more pie, except that entering cost $99 and the pie was soggy. Most of all, I was shocked to learn there are something like 800 Olive Gardens in the U.S. How could such lousy pasta support this level of business in a truly free market?

It turned out the market had been signaling its displeasure. Sales had been declining for several years. The end came in 2014 when activist hedge fund Starboard convinced other shareholders in Olive Garden parent company Darden Restaurants to elect its slate of directors. A new CEO and management team commenced a turnaround with a focus on menu basics and “recreating Italian authenticity.” A year later, customer reviews had improved, sales and profits were up, and Darden stock had risen over 50%.

First, while Olive Garden has shareholders who took action after a few years of declining performance, most colleges and universities struggle with absentee trustees who fail to act like real owners. Second, Olive Garden customers average multiple visits each year (God help them) and gain information that informs each subsequent purchasing decision; the cycle time between purchases is a matter of months. For bachelor’s degree programs – a one-time purchase – there is no cycle time; students don’t have the opportunity to let colleges and universities how they feel about a poor return on their investment by refraining from enrolling again. It’s not that students are clueless about the fact that there are higher returns to some degrees than others. However, the signal has been misinterpreted as students have left some non-STEM fields (liberal arts, humanities and social sciences) for pre-professional non-STEM fields like business, accounting, education and healthcare – perceived to be more employer-connected and higher-return. Unfortunately, they’re not.

Does all this indicate that non-STEM degree programs might never benefit from an Olive Garden-like market-driven turnaround story? No, because colleges and universities are subject to a market force unknown to Olive Garden: the derivative or end-customer. Employers play this role for higher education and have begun sending a signal that non-STEM degrees are not worth the same as STEM degrees. employers like Ernst & Young and Penguin Random House recently indicated what they thought of the non-STEM degrees of their applicants by determining that degrees would no longer be considered in the hiring process. Penguin Random House’s human resources director noted there is no simple correlation between a [non-STEM] degree and future professional success. And Google’s Senior VP of People Operations has gone on record as saying that grades in degree programs are “worthless as a criteria for hiring.” As a result, Google also requires candidates to take assessments, which are much more predictive of success on the job.

For nearly 50 years, higher education institutions have enjoyed an academic Garden of Eden, walled off from market forces by poor governance and ill-informed customers. As the market (by way of employers) puts increasing pressure on colleges and universities, like Olive Garden, schools will have three choices: (1) Improve their non-STEM pasta – unlikely, since it’s been nearly 50 years, so it’s clearly not as simple as salting the water; (2) Unbundle the dishes – e.g., shorten the credential by integrating general education concepts into hard skills courses, or charge separately for breadsticks; or (3) Simply charge less – e.g., $99 for seven weeks, all you can eat (but definitely not free – sorry Bernie, but can you imagine the mess?).

Real Clear Education article on higher education’s responsibility for anger in electorate, by Ross Baird and Dane Stangler. No wonder Americans are angry: many have realized that college access is not the same thing as college success… Without action, Americans’ anger will not subside. Read more 2. Naming Names Chronicle of Higher Education and ProPublica report on background of ACICS commissioners, showing two-thirds served as executives at for-profit colleges while sitting on the council, by Annie Waldman. A third of the commissioners came from institutions facing consumer-protection lawsuits, investigations by state attorneys general, or federal financial monitoring. Read more 3. A More Sensible Future American Council on Education report “Quality Dimensions for Connected Credentials” providing useful framework for evaluating emerging credentials along six dimensions: transparency, modularity, portability, relevance, validity and equity. Higher education leaders and decision makers are well-positioned to… improve their own credentials in ways that are appropriate for their institutions and communities. Read more