Most transformative ideas in higher education already exist. The hard part is not the idea, but rather selection and execution. Of the many ironies in American higher education, one of my favorites is its combination of isomorphism – the tendency for universities to have identical missions and strategies, largely driven by college rankings – and “not invented here” syndrome.

I’ve discussed the trouble with isomorphism in previous Letters. Isomorphism made headlines this week in a report from the New America Foundation criticizing the American Association of Universities, the premier association of research universities. Written by policy director Kevin Carey, the report correctly pointed out that the stature of AAU membership causes universities to fruitlessly waste time and money focusing on superficial measures of research activity – none of which relate to return on investment for tuition-paying students. Through the AAU, wrote Carey, a “tiny cabal of venerable institutions has done more to shape and, increasingly, harm the cause of higher learning in America than any other group one could name.”

“Not invented here” syndrome is the tendency of colleges and universities to develop their own courses, programs, systems and processes rather than looking outside at what works and then doing that. “Not invented here” is understandable: a natural byproduct of intelligent faculty participating in shared governance and exercising academic freedom and intelligent administrators using their best judgment in a loosely managed organization. But it is pernicious. Colleges and universities are trying to achieve the same programmatic outcomes with similar student demographics. If a course, program, system or process works well in one setting, it’s highly likely it will work in another. So it is pernicious because it results in services that are delivered less efficiently and effectively.

Of course, I may be biased here. One of my formative experiences in higher education involved borrowing someone else’s idea – to long-lasting effect.

The 1991 Calhoun College room draw had a major problem. Room configurations for rising sophomores mandated that three different groups of friends combine into a single suite of 10. As a member of one of these groups, I was adamantly opposed to the combine. After all, wasn’t one of the privileges of being a sophomore choosing one’s roommates?

It all came down to a mediation in the basement of our freshman dorm led by the Chair of the Calhoun Rooming Committee and the head freshman counselor. After various mathematical contortions, it became clear that the only way to avoid this fate was if one of our number, an avid sailor, followed through on his intention (sensible at the time, ridiculous in retrospect) to live at the college yacht club. We left the meeting praying to the sailing gods, but it wasn’t to be. Ten virtual strangers would be roommates next year in a huge two story suite in the top corner of Calhoun.

I spent some time thinking about strategies for making sophomore year tolerable and hit upon BookWorld. A year earlier, Yale’s favorite place to buy comic books and soft pornography closed down, and a group of freshmen (now sophomores) had received – in their words – a “five finger discount” on the BookWorld sign. This was no ordinary sign. It was 10-feet long, four-feet high and stuffed with absurdly long fluorescent bulbs illuminating a sign that gave no indication that the works purveyed weren’t of the highest literary caliber. That spring the sign occupied the entire living room of their tiny two-bedroom triple in Branford College. The room, cramped though it was, had obtained some notoriety as BookWorld, and I thought a clear identity and some notoriety could go a long way to help us.

So I approached the group and, upon learning that they had valid title to the sign under an obscure theory of property, paid $90 for the sign and their help carrying it into Calhoun storage. When September came around and storage revealed its secrets, my new roommates saw what I had in mind. Several were solidly opposed. Most were neutral. Only two others shared my vision. Fortunately one, Jon, was a wonderful set designer/builder for various theatrical productions. He immediately saw that by building a very long shelf with angled edges, the sign could be mounted for all of Calhoun to see.

In the spirit of humoring us, everyone kicked in for the shelf construction and Jon got to work. When he was done, Jon engineered the task of raising the shelf and then the sign. Both were dangerous and involved winching up to the Calhoun castle on the third story, but doing so with safety ropes attached to the bottom to ensure that a sudden gust of wind wouldn’t send our new brand identity crashing through the dining hall stained glass windows. In retrospect, it’s amazing we never asked for permission. But no one tried to stop us. A few seniors walked by with eyebrows raised, particularly as the sign was stood on its end and passed up two more stories in the stairwell. 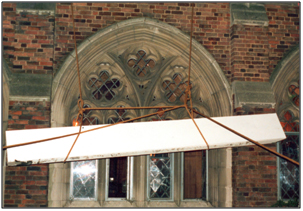 Winching the shelf clear of the dining hall windows 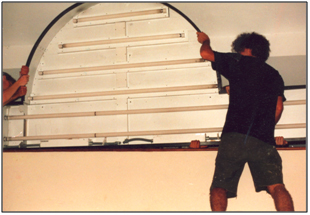 The sign raising was so unifying that we all agreed to follow through on an idea from a passing art history major: celebrate the opening of BookWorld with a wine and cheese art opening -- each roommate painting his own work inspired by the sign. Again, Jon got to work preparing canvases and the next weekend we attracted more attention as we painted together in the courtyard. The art history major curated the show and wrote descriptions of each painting. The BookWorld opening turned into the social event of the fall. By Christmas, even the naysayers in our group self-identified as BookWorld. The sign had united a disparate group.

A decade later all 10 of us were invited back by the Calhoun Master to give a talk on the origins of BookWorld. BookWorld had become the most desirable suite in Calhoun and the site of the most memorable parties. The commemorative T-shirt read “BookWorld: 10 years of (Y)ale” with the “Y” crossed out.

Five years after that Calhoun was renovated. The new Master was asked what defined the college and needed to be preserved in the renovation. BookWorld was at the top of the list. The architects got to work. They couldn’t figure out how we’d gotten the sign up there. An electrician who examined the set-up said it was a death trap. But they went ahead, used a crane to lift a cherry picker into the courtyard and redesigned the suite around the sign. Although the redesign forced the removal of one bed in the suite, it was successful and the sign is now permanently (and safely) affixed to the wall, officially part of Yale’s physical plant. 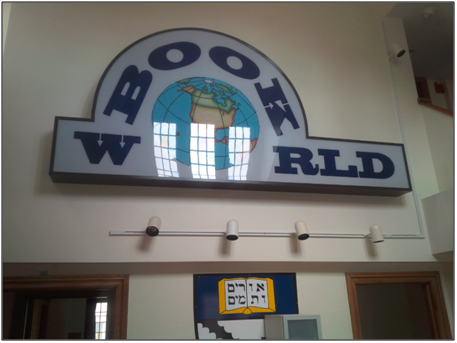 So borrowing someone else’s idea to address our identity crisis had a lasting effect on Yale – certainly more than if we’d donated money and had a seminar room or weenie bin (a small study carrel in the underground circulating library) named for us; it seems they resell those every few decades. All for the good, I think, except that at a recent reunion, Jon was muttering that, with his luck, the lost bed will mean there won’t be room at Yale for his son.

At that same reunion, looking up at the awful fluorescent light cascading down into the courtyard, I pondered how universities can combat “not invented here” syndrome without resorting to oddly shaped signs.

Outsourcing is one approach. According to one recent survey, 60% of presidents are looking to outsource more services. Colleges and universities are increasingly outsourcing a wide range of functions, primarily to achieve cost savings. But outsourcing can also ensure that the business function in question is delivered in a way that is more likely to be effective – because the service provider likely performs the same function for dozens of other colleges and universities.

If outsourcing proves impossible or implausible, colleges and universities should devote more resources to benchmarking what other institutions are doing and look to conform processes and programs where it’s clear another school has a better idea. For example, the University of North Texas – Dallas, an institution founded only 13 years ago and therefore less concerned about isomorphism or “not invented here” syndrome, engaged Bain Consulting in 2011 to benchmark innovative new models and recommend a new path. The resulting recommendation: online and hybrid delivery, a narrow set of career-oriented majors, larger teaching loads for faculty and elimination of the traditional semester in order to “bend the cost curve.”

To make our world more of a “BookWorld,” colleges and universities need to address “not invented here” syndrome.