Free College Is Just Another Word For Nothing Left To Lose

In my experience, telling someone they’re getting something for free leads to problems. My first job out of college was in management consulting where I spent the majority of my tenure at one of the old “music clubs” that offered 12 CDs for a penny. This offer yielded two distinct forms of bad behavior. The first was fake applications from college students seeking to build entire CD collections. As a result, the company was forced to block mailings to college zip codes. The second was the reaction once club members realized that, having received the 12 CDs for a penny, they were now on the hook for purchasing at least 6 CDs at full price, plus $6.99 shipping and handling (a total shipping and handling bill that more than paid for the 12 “free” CDs). I remember touring the warehouse in Terre Haute, IN and coming across a huge pile of very heavy things – bricks, boxes of keys and rocks – and asking where they came from. The answer: unhappy customers would affix the postal indicia from the return envelope to the heaviest item they could find and mail it back to the company.

Someday some enterprising student will write a Ph.D. thesis on the lineage of free music to free college. The free college movement originated several years ago at the state level as a “last dollar” policy to eliminate tuition at already low-cost community and technical colleges. In its first year, the Tennessee Promise increased enrollment by 6%. This germ of an idea has now snowballed to the official platform of the Democratic Party Hillary Clinton has proposed free tuition at four-year public colleges for children of any family with annual income of less than $125k. This week in Philadelphia, the free college flag was waved repeatedly in an attempt to rally Bernie Sanders supporters to Hillary’s cause.

The impetus for free college is understandable. It’s the natural response to stories like this one on the current cover of Consumer Reports. 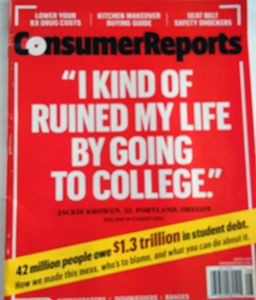 The August issue chronicles a parade of student debt horribles. Jackie Krowen, age 32, attended community college, Portland State and then nursing school. Although a working nurse, she’s been unable to make a dent and now owes $152k – in excess of the $128k she borrowed. Jessie Suren, 28, attended La Salle and now works selling vacation packages on commission – her $72k in loans now $90k. Currently, 25% of student loan borrowers are either behind on payments or in default. Consumer Reports surveyed 1,500 Americans with student debt and found 45% said college was not worth the cost, 47% said they’d go to a cheaper school if they had to do it over again, and 44% had cut back on day-to-day living expenses in order to make their loan payments – the same percentage as would want to know how much student debt a potential partner has before commencing a serious relationship. Over the past decade, the combination of state disinvestment in higher education and the failure of colleges and universities to adopt more cost efficient delivery models and credentials has created a culture of debt: 42M Americans owing $1.3T in student loan debt.

With free college, Jackie, Jessie and millions of other graduates (not to mention dropouts – far more likely to default on their student loans) would be less economically hamstrung today. But it would come at a cost. As Kevin Carey has noted, free college “would be an unlimited bonanza for colleges and a huge drain on the Treasury.” With regard to the former, free college would exacerbate the tendency of colleges to view federal financial aid as a price floor – the bonanza flowing to public schools only, taking market share from non-subsidized private colleges. With regard to the latter, unless the Democrats take both houses of Congress this fall, free college is less a viable policy than a liberal rallying cry.

In addition to being unbundled, what degrees have in common with CDs is that they’re never actually free. Not only would taxpayers be footing the bill, but no tuition is not the same as free college. Students would still be on the hook for a range of fees, books, room and board – typically ranging between $5-10k annually. Then there’s the opportunity cost of not working (or working a part-time as opposed to a full-time job) – easily $10k or more annually. Which might all be fine, except that as David Friedman of Willamette Law School has shown, free offers can subvert rational decision making. “Cognitive psychology and reciprocity theory demonstrate that the power of a free offer will induce consumers to behave differently, making them more likely to engage in a transaction with a free offer than a transaction without a free offer.” This is why the FTC regulates free offers. So free college will attract more students to enroll, many of whom won’t have fully considered non-tuition costs. As with "free" CDs, recipients of future free college off‎ers might be tempted to affix alumni solicitation-accompanying postage-paid return envelopes to various and sundry heavy objects.

But the biggest failing of free college is not that it’s inadvisable, impractical or even immoral, but rather that it’s a Hail Mary pass in an attempt to defeat student debt culture when there are better plays available. Put differently, while the Democratic Party is parroting Me and Bobby McGee - “free college is just another word for nothing left to lose” - we’re a long way from “nothing left to lose.” There are other options.

The Department of Education’s response to the Jackies and Jessies has been to encourage debtors to shift to income-based repayment (IBR) programs that allow them to better manage their debt. It seems to be working. Thanks to new efforts by the Department (ED) to promote IBR, over 4M borrowers are now enrolled – up 1M from a year ago. ED wants to add another 2M in the next year. If the goal is to solely reduce the financial burden on already-indebted students, IBR is a great solution. However, because income-based repayment programs – like free college – allow colleges and universities to continue charging whatever tuition they like without regard to student outcomes, they do nothing to reduce the burden on current and future students.

Income-based repayment is a half-measure and an unsatisfactory alternative for the free college crowd. A solution – and a viable retort to implacable Bernie fanatics – would place institutions rather than the federal government on the other side of the IBR transaction, at least for a portion of the total tuition bill. Called Income Share Agreements (ISAs), these institution-based IBR programs are risk-sharing agreements in which institutions receive a portion of students’ income over a defined period (typically seven years), capped at a maximum amount. As such, ISAs convert student loan debt into equity in the student’s future income stream.

While ISAs won’t replace federal loans any time soon, most students will prefer them to high interest rate Private Loans and Federal Parent PLUS Loans. Most important, by owning payments linked to the student’s income (equity) instead of relying on additional debt financing to fill funding gaps, ISAs incentivize colleges and universities to create better financial outcomes for students. And because future underwriters of institution-based ISAs will focus on ensuring this attractive new financing option (i.e., equity instead of more debt) is made available to students likely to earn more and not to students likely to graduate into the ranks of the unemployed or underemployed, the availability and/or terms of ISAs will send valuable signals to students to select programs and institutions that yield a strong return on investment.

Purdue recently launched America’s first institution-based ISA (Back a Boiler) in partnership with Vemo Education. While many colleges and universities will follow in Purdue’s footsteps, ISAs currently lack any governmental or political recognition, let alone support.

I recognize that institution-based ISAs won’t thrill Bernie acolytes nearly as much as free college. If they did, the music club I worked at might have promoted income-based repayment for music instead of 12 CDs for a penny. But perhaps once the election is over and we begin ascribing value to things again rather than believing they should be free (e.g., college) or taking them for granted (e.g., our democracy), ISAs will get some attention.

If the goal is to address affordability for current and future students while also avoiding hundreds of billions of dollars of incremental federal spending on college, supporting and promoting the expansion of institution-based ISAs is viable, pragmatic policy that should receive bipartisan support.

1. Develop New Business Models Before It’s Too Late The Evolllution op-ed by Jim Hundrieser of Association of Governing Boards on why tuition-dependent private colleges and universities need to make systemic changes and develop new revenue streams. Approximately 10 to 15 percent of private colleges don’t need to change their model… My fear is that a few hundred private schools will fail to stay relevant and will close in the next twenty years while public and larger private schools consume their market share. Read more 2. Report From The Other Side Forbes review of state of HR software – the software that’s currently determining whether college and university graduates are being seen by hiring managers at employers, and if/how their credentials are being interpreted and valued – by Josh Bersin of Deloitte. Consider the world of recruiting, for example. Many of us who have been in this market for years thought the applicant tracking systems (ATS) market was kind of “done.” Well companies like Greenhouse, Lever, SmartRecruiters, and dozens of others are now reinventing the space from scratch – leveraging integrated social tools, video interview technology, and new tools for referral marketing and analytics to reinvent recruitment platforms. Read more 3. Student Loans… Delivered By Drones CNBC piece by Jon Marino on Wells Fargo partnership with Amazon to sell student loans, demonstrating student loan debt is increasingly central to America’s consumer economy. Amazon is cutting up to 0.50 percentage point from the interest rate being offered to Prime Student borrowers who also establish an automatic monthly repayment plan with Wells Fargo. Read more