Of Degrees and Debutantes

“With everything that's going on, this is probably the last deb season as we know it.” - Nick Smith, Metropolitan

Whit Stillman’s 1990 film Metropolitan chronicles the adventures – more accurately, elaborate and annoying conversations – of a group of rich, young toffs during debutante ball season. I remember seeing the film with friends my first year of college. Having grown up in Canada, the world of Metropolitan was foreign and exotic to me. But it was familiar to a few people in our group, one of whom had been a “deb.”

Since then, I’ve been amused by debutantes – 17- or 18-year-old young ladies from upper-class families who are “presented” to society at a formal “debut” event, typically called a debutante ball. Historically, these events had a practical purpose: to display young ladies to eligible bachelors from equally impressive upper-class families, to foster inter-marriage, and to perpetuate class dominance.

But as Whit Stillman’s character notes in the film, debutantes have gone through a rough patch in recent years. Even Prince Philip, a man not known for his progressive views, barred the main London event from being held at Buckingham Palace, calling it “bloody daft.”

All this came to mind this week after reading a review of Jeff Selingo’s informative new book College Unbound by Geoff Cox, President of Alliant International University. In his review, President Cox had the following insight:

The big, unanswered question is whether we will ultimately settle for this unbundled approach to education for the majority while elite institutions continue to cater to a highly selective, and highly fortunate, minority of students. Even though we all recognize that a clear hierarchy of institutions currently exists, from the Ivy League on down, we have so far maintained the notion that a college degree is more or less the same kind of thing regardless of where it comes from.

So the question I’ve been mulling is this: could degrees ever become as impractical and amusing as debutantes? Here are a few reasons why this is worth pondering.

1. Return on Investment
Debutante balls are expensive. In order to attend the International Debutante Ball in New York, you have to join the organization and pay a membership fee of $16,000. Dance lessons (waltzing is de rigeur) and thousand-dollar dresses add to the cost. The return on this investment in the present day is unclear. Most debutantes seem to view the experience as something they’re doing because their mom did it, or as a networking opportunity.

Degrees are even more expensive than debutante balls, but many offer a similar return profile. For three years, poor ROI from higher education has been a constant theme of the UV Letters. But here’s the good news: technology significantly lowers the cost of higher education. Online delivery cuts the cost of delivery in half. And when combined with competency-based learning, by half again. This is why disruptors like UniversityNow can charge as little as $199 per month for regionally accredited degrees. Unfortunately, 90% of higher education institutions delivering programs online continue to charge the same as for their onground programs. Which means degrees become less practical, and more like debutantes.

As for debutantes themselves, they already know that networking through their smartphones is more cost effective than waltzing at balls. 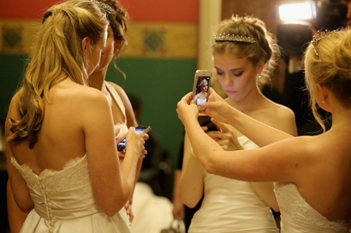 2. Opacity
Debutantes are “presented” to society, but what does society learn from the process? Only that the girl looks good in a white dress. Likewise, degrees don’t say very much about the recipient. In his review, President Cox mentions unbundling. I’ve written previously about the coming unbundling of higher education. Here’s the survey course syllabus.

And so, if colleges and universities don’t adapt, degrees could go the way of debutantes.

3. Too Exclusive
Our colleges and universities are already too much like debutante balls. This was the rationale for President Obama’s January roundup of over 100 higher education leaders at the White House: make colleges and universities more inclusive from a socioeconomic standpoint. The point the President is trying to make is a good one: you shouldn’t have to be a deb, or know one, to have the opportunities that a great college can provide.

If President Cox is correct and degrees will only continue to be offered by the most elite institutions, debutante balls and degree-granting institutions may become kissing cousins.

“So many things which were better in the past have been abandoned for supposed convenience.” - Nick Smith, Metropolitan

If this is the future, it will take some time – a decade at least. But degrees are at risk of going the way of debutantes.

If they do, while I agree with President Cox’s prognosis, I take issue with the notion that we’ll definitely view the highly selective, highly fortunate students pursuing degrees at elite institutions as somehow much better off. Rather, in this brave new world, we – and employers who will be making hiring decisions – may come to view them the same way we view debutantes today, which is to say a curiosity, or perhaps “bloody daft.”