One of the more colorful characters from my college days was a student from Japan named Shohei who preferred to be known as Speed. Among his most famous exploits: projecting the Bat Signal onto Harkness Tower; and – previously – betting and losing his high school newspaper’s entire operating budget on shares of an over-the-counter traded Philippine paper company in the Black Monday crash of 1987. One summer, as I began working for Summer Programs – tasked with keeping 20 visiting Korean students out of trouble – Speed convinced me to let him borrow my dining hall card and promptly departed for the copy shop. An hour later he returned with a facsimile that allowed him to dine free all summer.

In his paper “Shopping for Gucci on Canal Street,” Barnett posits that producers of luxury goods actually benefit from counterfeits under the following conditions: (1) when goods (or services) confer significant status benefits – with counterfeits signaling desirability of the original item and providing free advertising for the producers; (2) when producers can’t introduce imperfect grades of the original without significantly depleting accumulated brand capital; and (3) when imitators produce imitations of the original that are obviously imperfect – for example via poor workmanship, lower quality materials, or misprinted or missing labels. As a result, counterfeits may result in increased revenue for producers of luxury goods. 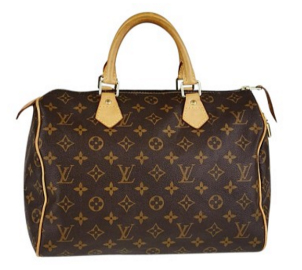 The Harvard of handbags

One of the most expensive luxury goods is an elite college education, with Ivy League schools charging an annual sticker price an order of magnitude more than the most expensive Louis Vuitton bag. Higher education meets Barnett’s first two conditions: status and inability to introduce lower quality versions. With regard to the third, the distinguishing marks of an elite education are not as easily identifiable. All universities mimic Ivy League schools to some extent. Grassy quad? Check. Football and basketball teams? Check. Privileging research as equal or superior to teaching? Check. A credential that takes 120 credits and (at least) four years to complete? Check. And critically, in an industry where price is often the most important signal of quality, hundreds of non-elite private universities mimic Ivy League prices.

The isomorphism that pervades America’s colleges and universities yields a market that unnaturally restricts product offerings and consumer choices. It’s the equivalent of handbag producers saying to consumers: If you can’t get a real LVMH bag, you can only get a fake one. Which begs the question: why doesn’t someone make a different bag?

While Barnett points out that in the fashion context, courts have noted that there “does not seem to be any significant problem of purchasers who mistakenly purchase fakes when intending to purchase the original,” that’s not the case in higher education where imitations of the original luxury good are not obviously imperfect. The resulting harm to students is manifest in the crises of completion, affordability and return-on-investment currently plaguing higher education.

In his paper, Barnett documents how luxury goods producers like Gucci and LVMH accept or even support the counterfeits that provide valuable free advertising. In higher education, luxury schools like Stanford and Harvard exhibit similar tendencies by opposing measures that would call out bad colleges and reduce consumer confusion.

In 2011, the Western Association of Schools and Colleges (WASC) attempted to require institutions to define a “stated level of proficiency” for five skill areas for graduates (written and oral communication, quantitative skills, critical thinking, and information literacy) and then to compare their graduates’ performance to other institutions’ in at least two skill areas. The pushback, as reported by Doug Lederman in Inside Higher Education, came from Stanford and the UC System. According to the IHE story: “John Etchemendy, Stanford's provost, urged WASC to delay consideration of many of them. Asked why, Etchemendy explained that a delay would give opponents more time to ‘convince [WASC] that [it was] completely wrong’ in its approach to ensuring the quality of institutions.” Stanford’s Vice Provost for Academic Affairs was quoted as saying: "No one here thinks that what WASC is trying to do for quality assurance will really assure quality.”

In 2013, following President Obama’s announcement that the Department of Education would publish new College Scorecards, including salaries of recent graduates, Harvard’s President, Drew Gilpin Faust, wrote a critical letter to the New York Times saying: “[Focusing on] earnings data… will further the growing perception that a college degree should be simply a ticket to a first job, rather than a passport to a lifetime of citizenship, opportunity, growth and change… When we decide what to measure, we signal what counts. Equating the value of education with the size of a first paycheck badly distorts broader principles and commitments essential to our society and our future.”

The obvious question is why? Gucci and LVMH allow counterfeits because they signal desirability, provide free advertising, and ultimately boost sales. While Ivy League Schools have no intention of selling more, in higher education reputation is at least as valuable as revenue. And a major reason our elite universities are viewed with such reverence is that thousands of bad colleges have boosted the social and economic category of COLLEGE from a finishing school for the sons of merchant class elites, to the sine qua non for virtually any successful career.

The existence of thousands of hard-to-differentiate institutions has helped make COLLEGE a core American (and increasingly global) value. Ivy League schools and their brethren are quite happy at the top of this much larger pyramid. Their Presidents are equally happy as perhaps the most prominent spokespeople for the more prominent higher education enterprise. The value of COLLEGE is well understood; charlatans seek to profit from it by naming flim flam real estate courses “Trump University.” And while Trump University is surely a bridge too far for Stanford and Harvard, it’s worth noting that no President of an Ivy League university, Stanford or MIT, has taken a public position against the Corinthians or ITTs of the world that have clearly misled students.

It’s time for the Ivies to stop behaving like Gucci and LVMH. Even if opposing accountability measures helps sustain the value of COLLEGE, thereby helping graduates of elite universities (who sit at the top), all elite universities have social missions. And that can’t mean accepting a status quo that benefits their own students at the expense of less fortunate students – particularly students drawn by the allure of the luxury good to a bad college (and particularly those students who fail to complete bad colleges and leave indebted).

Leaders of Ivy League universities should publicly support meaningful accountability and outcome measures that will allow students to readily distinguish low-quality knockoffs. When such measures are implemented, bad colleges will find themselves distinctly out-of-fashion, and – as necessity is the mother of invention – many will launch innovative, differentiated and specialized models of postsecondary education that will benefit all students. Even students like Speed.

1. Unaffordable, That’s What You Are… Bureau of Labor Statistics report showing College tuition and fees have increased at 3x the rate of other goods in the past decade.
Read more ProPublica report showing in-state tuition at public colleges rose 80% from 2000 to 2014 despite median household income dropping 7%.
Read more 2. We Have Met The Enemy, And It Is Complexity Washington Post op-ed by Navient CEO Jack Remondi on the 56 options for repaying federal student loans. The staggering number of options — 56 in total — complex terms and cumbersome application and renewal processes leave many… adrift. Read more 3. The Coming Of Competency-based Hiring Wall Street Journal article by Kate Davidson on how employers are seeking new ways to distinguish candidates for employment. Companies are investing more time and capital in teasing out job applicants’ personality quirks, sometimes hiring consultants to develop tests or other screening methods. Read more