My first real job was a triumphant lesson in unplanned obsolescence. I landed a paid internship at a New York PR firm called Creamer Dickson Basford and was assigned to the Pizza Hut account. It was an auspicious summer for Pizza Hut public relations. Not only was Pizza Hut launching a 3D campaign for its Chunky-Style Pizza – I was responsible for assembling a 3D press kit, complete with 3D photo of chunky toppings bursting from the pizza and 3D glasses – but Creamer Dickson Basford had convinced its client to run a national blimp tour to draw attention to the launch of the Bigfoot Pizza: a 21-slice rectangular pizza, or 2 square feet of pizza.

As this wasn’t just any old pizza, it couldn’t be just any old blimp. The Bigfoot Pizza Blimp was the first with a fiber-optic night sign, permitting 24 x 7 promotion of gluttony. On July 2 it was scheduled to fly from Boston to New York to provide a magnificent large-pizza-themed aerial spectacle alongside the fireworks over the Hudson River. But on the morning of July 4, as the Blimp flew over the Hudson River, it began losing air. A lot of air. Seeing no other choice, the pilot of the dirigible I had promoted to Sports Illustrated for Kids as “safe and fun” crash-landed on the roof of a squat seven-story apartment building in Hell’s Kitchen.

Images of the deflated blimp pancaked down the side of 410 W. 53rd St. dominated the New York tabloids for days. 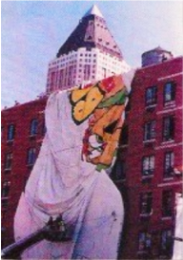 All the attention being paid to the Pizza Hut Bigfoot Pizza Blimp was astonishing. Fortunately no one was hurt, so we kept the blimp in the news with stories like how much we were paying to store remnants in the parking lot across the street. Front page of the New York Post later that week: “At Lee’s Parking on 53rd and 10th, it’s Cars $5, Trucks $10, Blimps $75.” The non-stop coverage drove Bigfoot Pizza awareness and sales through the roof.

Some things just aren’t made to last, like high-tech blimps. But what about programs of study at colleges and universities? They’re intended to last forever, and most do. In a 20-year period between 1978 and 1998, my alma mater offered 97 distinct academic programs or tracks for undergraduates. During that time, only three programs were discontinued, and two of the three were reorganized (Engineering was split into various Engineering tracks, and Economics and Political Science became Ethics, Politics and Economics). Meanwhile, over one-third of these programs and tracks – including German studies– failed to attract more than 100 undergraduate course registrations per year. And yet the only program to receive a Viking funeral was Organizational Behavior. That’s a generational obsolescence rate of 1 percent.

What other kinds of products have no expiration date? Physical infrastructure and industrial goods can only aspire to last this long. In contrast, knowledge- and technology-based products – much closer to academic programs than to roads, buildings and airplanes – are designed for a limited useful life with the expectation that they’ll be surpassed by new and better products, or fundamentally transformed by regular iterations.

This is what’s happening in India, where facing massive unemployment and underemployment among its 750,000 engineering graduates each year, the government is now demanding that universities update all course syllabi “annually… per requirements of industry.”

Of course it’s true that the vast majority of academic programs (including lousy engineering programs at Indian universities) – if pursued diligently – inculcate core competencies, cognitive and executive function skills. A generation ago, the depth of these programs combined with the breadth of distributional requirements was sufficient to launch most graduates onto the first rung of a professional ladder. But unlike our programs of study, the economy hasn’t stood still. And while critical thinking is an unmitigated good thing, continuing to defend the status quo with broad terms like critical thinking doesn’t demonstrate great critical thinking.

The key question – and the most pertinent to students themselves – is what programs will mean for graduates and their pathways for the next five years.

Students are flailing about, trying to figure this out. We’re seeing massive shifts from arts and humanities to STEM. Alex Usher recently pointed out enrollment increases of between 30-60 percent in STEM programs from 2009 to 2016 at a number of Ontario universities. And the percentage of students who are hedging their bets by double majoring appears to have doubled since 2000.

I suspect that had Yale shuttered more than one program between 1978 and 1998, it would have launched more than two new STEM programs. And although the University of Wisconsin at Stevens Point has launched six new STEM degree programs in the past decade, including Applied Computing, Data Analytics, Health Information Management and Technology, and Health Information Management and Technology, I wonder if UW-Stevens Point might have done even better had it eliminated any academic programs in that same period (it did not). A more proactive approach could have boosted enrollment, reduced the $4.5 million deficit the campus faces over the next two years, and limited the need for the drastic restructuring plan announced last week to cut 13 majors, including English, history, and all three foreign languages.

The near-immortality of departments and majors provides a misleading sense of academic plenty. College students may well be getting soft skills and digital skills – and most do in their extracurricular activities – but there’s little guarantee it’s happening in their program of study. And there’s no reason why not besides the absurd durability of programs that fall short. Planned obsolescence in designing academic programs – or at least a systematic review of whether programs are doing an adequate job of producing all the skills graduates require – would be helpful in this regard.

Yale can afford to be inefficient in a way that few other colleges and universities can. Every week we learn of new non-selective schools forced to shutter programs due to falling overall enrollment and mandatory institution-wide budget cuts. The key to avoiding becoming the next Sweet Briar College– a school facing a conundrum of fundamentally needing to change, while relying on the generosity of nostalgic alumni who don’t want change – is as Trace Urdan says, “beginning the process long before your back is against the wall.”

At a minimum, programs that fail to attract a threshold number of students should go under the microscope. But we ought to do better than react to student flows. Why not institute a regular, thorough review of whether every academic program is providing the skills graduates actually need, and make clear to all stakeholders that programs that fail to make the grade will be culled?

Such a self-imposed standard would be much higher than accreditors currently require, where the test of stating learning outcomes and demonstrating outcomes are being met ensures that an institution’s accreditation is as long-lived as its academic programs.

No one enjoys confronting their own mortality. But we die to make room for the new. To really understand this eternal tension, you’d need to take a few courses in humanities or classics. The problem, you see, is that few employers are profound enough to prioritize such understanding over the skills new graduates actually need to do the job.

1. No Anarchy In The UK University World News article on UK government decision to extend new Teaching Excellence Framework – which initially rated universities as a whole – to the “course” or academic program-level, by Brendan O’Malley. [New Universities and Science Minister Sam] Gyimah said: “Prospective students deserve to know which courses deliver great teaching and great outcomes – and which ones are lagging behind. “In the age of the student, universities will no longer be able to hide if their teaching quality is not up to the world-class standard that we expect.”… The department said the framework will take into account student feedback, drop-out rates and graduate outcomes to help deliver the objectives of the review of post-18 education launched by the prime minister last month, ensuring that students get the value for money they deserve from higher education. Read more 2. Stop Being An Education Snob CNN’s Michael Smerconish interviews Tony Carnevale of the Georgetown Center on Education and the Workforce on whether parents should be pushing children to four-year colleges and universities. We set a noble standard… [but] there are lots of pathways to the middle class. The four-year college degree is not the only one by a longshot… It all depends on what you take. That determines what you make. Read more 3. A Uniquely American Model For Apprenticeships Forbes column on how employers are starting to outsource entry-level hiring, and how this is giving rise to a new American model for apprenticeships. There’s little demand on the part of employers for hundreds of apprentices to run around their offices. The outsourced entry-level hiring model is a solution for scaling apprenticeships in America. As employers increasingly seek to outsource entry-level hiring, service providers like staffing companies, software development shops, and call centers will have an incentive to recruit, train, and place entry-level talent: a new revenue stream from staffing or placing this talent with clients… [So] there’s no need to look at how other countries run apprenticeships. America leads the world in outsourcing. By outsourcing entry-level hiring, American companies can pioneer a uniquely American model for apprenticeships: outsourced apprenticeships. Read more