There’s a lot of room for speculation when it comes to the Yale secret society Skull and Bones. During the 2004 presidential campaign, George W. Bush commented it was “a secret society; so secret, I can’t say anything more.” And when John Kerry was asked the significance of both candidates being Bonesmen, he replied “not much, because it’s a secret.” So while there are many wild theories about what transpires in the Skull and Bones “tomb” on High Street in New Haven, including coffins, the skull of Geronimo and election to the Illuminati, what I think about when I think about Skull and Bones is having lunch with a crazy person.

It was the fall of 1992 and a New Haven resident had made news with the bizarre accusation that Skull and Bones was using subversive tactics to undermine Ross Perot’s Presidential campaign. My brother Aaron and I thought it would be interesting to have lunch with the gentleman to produce a report on his allegations for our magazine. Our lunch was less interesting than distressing. Our interlocutor revealed the secrets of Skull and Bones as “the traditions of Solomon,” which are “the anatomical private parts.” He went on: “They have a punishing time, spelled with lots of puns. It’s a sophomoric code that’s being used fundamentally, and I mean fun-da-mental-ly. They’ve got a secret language like rappers.” It went on like that for about two hours. When I got back to my dorm room I needed to lie down.

Suffice it to say, my curiosity about Skull and Bones was sated. I can’t say the same for my roommates, who, the following year, planned and executed an elaborate break-in involving a hacksaw, flashlights, photographic equipment, and the discovery that they could turn off the burglar alarm to this impenetrable tomb. What they found was a series of run-down blood-red colored rooms. All was well until they were sitting around a huge dining room table and were startled by a deep voice intoning “all right boys.” They were summarily chased out the basement door, one roommate injuring his shoulder as he launched himself down the stairs. Oddly, the only detail that was clear in the many photographs was a cut-out skull and crossbones on a lampshade.

While candidates in any hiring process may not have as many secrets as Skull and Bones, there’s a great deal that can’t be ascertained from the simple resume. And many employers are as curious as my roommates to learn more before deciding which candidates to interview (i.e., before a hiring manager allocates any time to any specific candidate). As Jeff Selingo noted last weekend in a prescient piece in The Washington Post, equipped with emerging “People Analytics” technologies, employers are eager to access additional data to evaluate candidates – a shift that “could transform how students find employment when they leave college and forever change the value of the degree as the sole signaling device that someone is job ready.”

Employers’ hunger for additional data is being driven by dissatisfaction with the signals they’re receiving from degrees. Beyond Credit Suisse referenced in Selingo’s article, Ernst & Young, PricewaterhouseCoopers and Penguin Random House are either saying degrees don’t matter or proactively masking from hiring managers whether or not candidates have degrees because they have ascertained that “degree bias” tends to result in false positives and false negatives in the hiring process. Meanwhile Google’s Senior VP of People Operations has gone on record as saying that grades in degree programs are “worthless as a criteria for hiring.” More broadly, only 11% of employers think graduating students have the skills that their businesses need and 75% of employers believe recent graduates are not well prepared in critical thinking and analytic reasoning, written and oral communication, complex problem solving, innovation and creativity, and applying knowledge and skills to real world settings.

Not surprisingly, we’re seeing a range of promising new providers gathering additional competency data for employers. Our taxonomy of this emerging market (with some leading examples) is as follows: 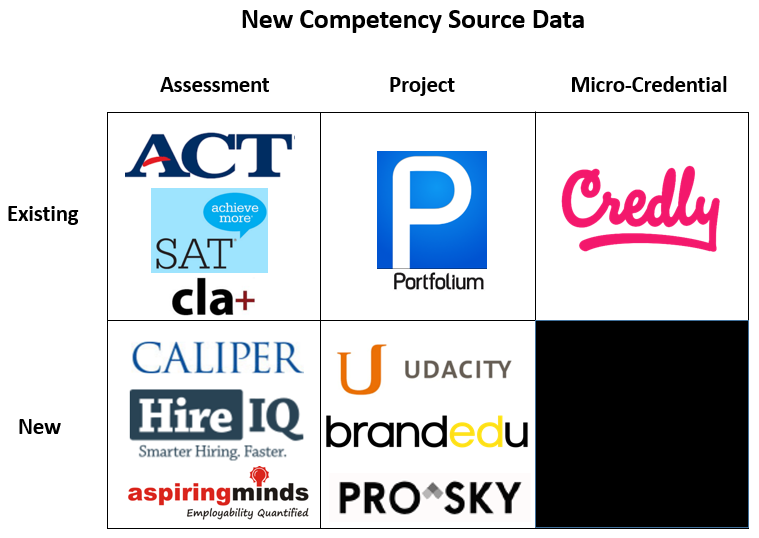 On the X-axis is the type of data. Is it an assessment, a project, or a micro-credential representing a specific competency? On the Y-axis is whether the data pre-exists the candidate’s encounter with the employer, or whether it’s being captured in real time by the employer during the hiring process.

Existing assessments (top-left quadrant) are standardized tests completed by the candidate, even many years ago. Studies indicate assessments like the ACT, SAT or GRE are still highly predictive of core cognitive executive function skills decades after the fact. Although none of the major test providers are offering their data to employers yet (and while it would almost certainly need to be on a candidate opt-in basis), this will happen in the next few years.

While few candidates for employment are likely to be interested in sitting for a 3-hour standardized test (particularly not until they’re informed by a hiring manager that they’re a strong candidate), we are seeing the emergence of short job-specific competency-based assessments that test both cognitive skills and industry-specific skills. Aspiring Minds, a company with business in India, China and U.S., has developed a highly predictive 30-minute test for cognitive skills that can be combined with skill assessments in professions as diverse as IT, telecom, media, healthcare, agriculture and plumbing.

Research has determined that work samples may be the best predictor of job performance – perhaps 5x more valuable than whether a candidate has a degree. Some employers request submission of work samples, but this is typically only once a pool of candidates has been selected for the hiring manager to contact. Now, thanks to ePortfolio solutions like Portfolium that are being deployed across entire institutions, students are uploading their papers, presentations and problem sets. Employers are inferring competencies from such work product and inviting matching candidates to apply for open positions.

Of course students may not have work samples that employers view as directly on point. As a result, a bevy of alternative providers are providing candidates opportunities to not only gain new skills, but also demonstrate performance on highly relevant projects. Many of Udacity’s courses (as well as some other MOOCs) are developed in partnership with leading IT companies, who should be very interested in performance on projects as they evaluate candidates for open positions. BrandEdU is helping millennials with career discovery in passion verticals like fashion, sports, media and tech with content from real-world professionals from the brands students know and love, and then delivering short, project-based online programs developed with leading universities and employers, allowing students to build a portfolio of relevant work product. ProSky is doing the same thing in social media marketing and search engine optimization. Employers provide real projects and observe students working in teams to complete before deciding whom to interview and hire.

Finally, and perhaps best of all worlds from the standpoint of employers, is the notion that candidates might present credentials that actually stand for intelligible competencies. Micro-credentialing is exploding, led by digital credential service providers like Credly, allowing educational providers, assessment companies and employers themselves to issue data-rich digital credentials to individuals who demonstrate specific skills. It’s also likely that employers will begin to value transcripts – heretofore unintelligible documents – once they begin to break down traditional credentials into competencies (the “double-click degree”).

It will take some time for these providers of new competency source data to reveal all the secrets of candidates and allow employers to do a much better job of eliminating false positives and false negatives as they assemble candidate pools for hiring managers to contact. In particular, many of candidates’ secrets will remain as illusive as the mysteries of Skull and Bones until this data is accessible through employers’ Applicant Tracking Systems (ATS); many employers are unlikely to proactively seek out competency data from multiple new sources (outside their current ATS interface). But the combination of these providers of new competency source data + ATS – perhaps creating a more intelligent Applicant Information System (AIS) that automatically sources new competency data from a range of providers for every job application – has the potential to cause the Great Unbundling of the college degree and usher in a Golden Age of American Education. And while this isn’t the secret of the Illuminati, it may be how we all become Illuminati.

1. The College Debt Crisis Is Worse Than You Think Boston Globe Magazine profile of students who are victims of the bachelor’s degree monoculture, but for whom the numbers no longer add up, by Neil Swidey. A rule of thumb for students is to keep total college debt to no more than the first-year salary for the job they plan to hold after graduation. But at some colleges, the median alumni salary equals the “net cost” that low-income students are paying for just one year at that college, never mind over four years… And if students don’t leave college with a degree, their earning power is barely any better than it would have been with just a high school diploma. Read more 2. Discounting Death Spiral Washington Post report on NACUBO survey showing private college discount rate for freshmen has reached 47%, by Jeff Selingo. This type of discounting ultimately will result in a death spiral for colleges. Every year, a college raises its sticker price but derives a smaller share of that increase in the form of actual cash. Eventually, its revenue flattens, or worse, shrinks. A few years of that trend is not sustainable for most colleges that rely on tuition for the bulk of their revenue… The question is whether higher-education leaders will abandon their discounting strategies like other sectors of the economy or continue their race to extinction. Read more 3. Reform Across The Pond Guardian column on reforms proposed in new UK government whitepaper. The amount a university can charge students will soon be linked to an independent assessment of its teaching performance via a Teaching Excellence Framework (TEF). Read more