In January, technology investor, bon vivant and now Trump supporter Peter Thiel sat down with Maureen Dowd of the (failing) New York Times for a profile that appeared in the Fashion and Style section. “Wearing a gray Zegna suit and sipping white wine in a red leather booth at the Monkey Bar,” Thiel unburdened himself to Dowd on topics as diverse as immortality, Hulk Hogan, putting a colony on Mars, and President Trump’s tendency to caress his hand affectionately. On the question of how a gay immigrant could support the President, Thiel responded: “Even if there are aspects of Trump that are retro and that seem to be going back to the past, I think a lot of people want to go back to a past that was futuristic — ‘The Jetsons,’ ‘Star Trek.’ They’re dated but futuristic.”

Peter Thiel feels somewhat dated to me; it’s been nearly five years since I’ve written about him. Back in 2012, on the heels of his critique of college as “a bubble in the classic sense,” he announced his Thiel Fellowship program: $100k grants to college students who drop out of college in order to pursue an entrepreneurial project.

I was reminded of Thiel recently when I read a Backchannel article titled “The Peter Thiel Pedigree,” profiling Thiel Fellows who, the Program director states, are “a league of extraordinary, courageous, brilliant individuals who should be a shining light for the rest of society.” The article recounts how, at the annual retreat, all members of this “kid version of the Young President’s Organization” received “Everlane backpacks and sweatshirts with DROPOUT written in black letters.” It is the highest irony that Thiel’s attempt to disrupt a culture of credential gathering has now become one of the most elite credentials a young person can achieve. 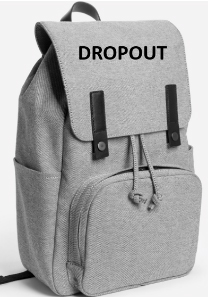 While we’re telling obnoxious Silicon Valley stories, a few months ago I talked about credentials with a partner at a brand-name Sand Hill Rd. venture capital firm. I was trying to make the point that creating new credentials that have real value in the labor market takes time – typically decades. He disagreed vehemently, saying that in tech investing, the important new credential – one that has emerged quite rapidly – is number of Twitter followers. Someone with tens of thousands of followers is someone he takes seriously in terms of investment or hire.

The history of higher education credentials – as distinct from the underlying education itself – is the history of the elite trying to distinguish themselves. During the colonial era, very few students completed degrees or earned any credential. Then, in the years leading up to the Revolution, the bachelor’s degree emerged as the accepted way for the merchant elite to bestow social status on their sons. Until World War II, the percentage of adults with bachelor’s degrees remained below 5%. Since then, of course, it has skyrocketed to over 30%. In the past decade, this credential creep has turned into an arms race in which the elite routinely attempt to distinguish themselves from B.A. hoi polloi with master’s degrees, professional degrees, and now Twitter followers. The Twitter example proves the elitist point. Only a small minority of Twitter users can have tens of thousands of followers – that is, unless your followers are bots, or unless everyone is following everyone else (which I’m sure would make my Sand Hill Rd. friend much less interested in the Twitter “credential”).

The Thiel Fellows example takes it a step farther – a nihilistic Trumpian step. DROPOUT isn’t a credential; it’s an anti-credential that’s inspiring followers like Billy Wilson, a Kansas State student with a 4.0 GPA who make his dropout announcement on Facebook accompanied by a lovely picture in which he proudly flips the bird to the Jayhawks. While there’s no need to be rude, I’m actually OK with anti-credentials because higher education needs another elite credential like it needs a hole in the head. (It’s like saying the trouble with air travel today is that there aren’t enough business class seats.) The fact that the new elite credential is an anti-credential demonstrates we’ve hit the top of the credential creep “upside-down U” curve and are on our way back down.

But while I’m happy to say good riddance to more elitist credentials – particularly as resentment of elitism is currently fueling populist movements worldwide – the fact that the most powerful labor market signals are often the most elite credentials is food for thought about the future of credentials for the rest of us. At a minimum, effective credentials must be differentiating. But credentials are actually most effective when they’re elitist.

So to my many friends (different from my Sand Hill Rd. friend) who believe the answer to our many postsecondary problems is college for all, I’m afraid the result – in addition to eye-watering deficits and even lower completion rates – would be inconsistent with what we know about credentials (again, as distinct from education). College for everyone would only make the bachelor’s degree even less differentiating in the labor market – and certainly less elitist – and accelerate the elite scramble for novel credentials and anti-credentials.

I don’t believe there’s a one-size-fits-all answer to the credential conundrum. Those who look for nano-degrees or some other new variant on the bachelor’s degree as the single “credential of the future” are mistaken. There is no silver bullet. Instead, the future of credentials is an explosion of diverse credentials – credentials that signal differently to different employers and for different positions that students have the requisite cognitive, non-cognitive and technical skills to hit the ground running. Candidates presenting distinct credentials with these signals will come across to relevant employers as elite candidates.

It’s certainly possible that these differentiating (and perhaps elitist) signals could be micro-credentials or badges embedded within a traditional bachelor’s degree. But I’d bet on the emergence of different pathways. So is the Lumina Foundation, which supports the Credential Engine initiative and counts all credentials of value in the labor market (not just degrees) towards its laudable Goal 2025 of ensuring that 60% of adults have postsecondary credentials. And so does the UK government, which last month announced a $200M+ investment in new postsecondary institutions chartered to offer 15 distinct pathways tailored to the needs of regional industries and employers; you can bet the credential at the end of these pathways won’t be a bachelor’s degree. That is, if there even is one. Many emerging new pathways incorporating a placement element will feature competency-signaling micro-credentials but eschew an uber-credential altogether, claiming (correctly for an increasing number of today’s students) that the credential that matters is the good first job.

The isomorphic bachelor’s degree will be deconstructed – shattered into a panoply of different credentials, each conveying differentiation and even elitism to a distinct set of employers, or for a distinct set of job functions. Credentials of the future may look more like the colonial era; rather than relying on a monolithic credential, candidates for trades had to demonstrate aptitude and fit in a wide variety of ways – including via apprenticeships and on-the-job training. That’s “dated but futuristic.” Somewhere in Silicon Valley, Peter Thiel is smiling thinking about the future of credentials, and President Trump caressing his hand.

University Ventures is reimagining the future of higher education and creating new pathways from education to employment. Our portfolio companies are making higher education more affordable, pioneering entirely new approaches to learning, and helping employers think differently about how and where they discover talent. We believe entrepreneurs and institutions that produce meaningful educational outcomes will realize better economic returns. We believe that private enterprises can produce profound social impact, and that public-private partnerships can unlock the potential of mission-driven institutions. Our commitment extends beyond the world of traditional higher education, to the challenge of last-mile training and placement to help individuals showcase their skills and get great jobs in growing sectors of the economy. University Ventures is led by principals with decades of experience as entrepreneurs, investors, and leaders in higher education. Our approach draws upon the values and traditions of higher education to play a sustainable role in transforming the path from education to a stronger economic future for students, universities, and employers.

1. The End of Employees Wall Street Journal piece on how changes to business processes mean today’s graduates are more likely to enter the workforce with staffing firms or specialized contractors, if not as independent contractors, by Lauren Weber. Steven Berkenfeld, an investment banker who has spent his career evaluating corporate strategies, says companies of all shapes and sizes are increasingly thinking like this: “Can I automate it? If not, can I outsource it? If not, can I give it to an independent contractor or freelancer?” Hiring an employee is a last resort, Mr. Berkenfeld adds, and “very few jobs make it through that obstacle course.” Read more 2. Broken Record Bloomberg on New York Fed report showing total U.S. student debt reached a record $1.31 trillion last year, by Shahien Nasiripour. Outstanding loans taken out for higher education have doubled since 2009, data show. No other form of household debt has increased by as much since then. In fact, of the six major categories of consumer debt tracked by the New York Fed, only student loans and auto debt have increased since year-end 2008 (total auto loans are up 46 percent). Total household debt has fallen by 1 percent. Read more 3. Regressive Free College Forbes report on who actually benefits from Oregon’s free community college initiative, by Preston Cooper. Students from households in the top two quintiles of Oregon Promise recipients will receive a combined 60% of the program’s $11 million in disbursements… Students in these wealthy quintiles will receive average awards of nearly $2,500. Meanwhile, students in the poorest quintile will receive average awards of $640, about one-quarter as much as their wealthy classmates.
Read more