Rob Ford for Secretary of Education

Thanksgiving comes late this year. But it always seems late to me. That’s because I grew up in Canada, where – due to the earlier harvest – Thanksgiving is the second Monday in October. It is typically Canadian that Americans never hear about the fact that the first Thanksgiving in North America was actually celebrated in Canada, more than 40 years before the vaunted Plymouth Thanksgiving. It was explorer Martin Frobisher who, having failed to find the northwest passage through to the Pacific Ocean, stopped on the shore of Baffin Island to give thanks to God – not for the harvest, but for not having frozen to death.

Speaking with my family back in Toronto, one thing they’re not particularly thankful for these days is Mayor Rob Ford. The personification of Wyndham Lewis’ famous quote (famous to Torontonians) “Toronto is probably not a good place to be an intellectual in,” Mayor Ford has made the unlikely transition from bumbling local figure to global embarrassment. I made the mistake of showing my 8-year-old son this clip of Mayor Ford strongly urging the media to get off his driveway. This has had two very unfortunate effects: (1) An insatiable interest in all things Rob Ford; and (2) A new “game” where he pushes his 5- and 3-year-old brothers off his driveway (and then thanks them). 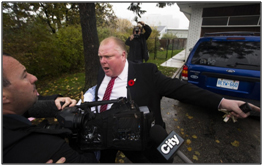 Get off his driveway. Thank you.

To his credit, one thing Rob Ford seems to understand is natural consequences. Like if he drinks heavily, bad things can and will happen. Would that the U.S. Department of Education (ED) had Mayor Ford’s sophisticated understanding. This week ED announced that for the 2013 fiscal year (ending September 30) it had generated a profit of $41.3B on federal student loans. And if not for the interest rate reduction deal last summer, profits would have been $8B higher. These profits comprised nearly half ED’s total spending – the biggest share in over 15 years. So student loans are subsidizing almost half of ED’s budget and reducing the Department’s total cost to taxpayers to the lowest level since 2001.

Aside from the fact that only two companies in the world made more money than ED last year (Exxon Mobil and Apple), student advocates naturally point to the $1.2T in outstanding student loan debt, the fact that 41% of current undergraduates are taking federal loans (up from 35% four years ago), and that 1 in 7 borrowers are now going into default, and ask whether the government should be making a profit on the backs of college students. Instead of generating profits, ED could be providing full Pell grants to an additional 7.3M students. In particular, when the U.S. government can currently borrow for for 10 years at 2.71%, why does it need to charge students a premium of 75% to 169% i.e., 2.05% for Stafford, 3.6% for graduate loans and 4.6% for parent loans? As Elizabeth Warren, the new liberal lion of the Senate says: “With college costs exploding and students being crushed by more than a trillion dollars in debt, I believe we should invest in our students -- not make obscene profits off them.”

ED’s response is that it’s not generating a profit, and that the accounting is complicated. These profits are being calculated based on the federal Credit Reform Act of 1990, which subtracts inflows from outflows and doesn’t fully capture the risks and collection costs for which a private lender would account. At the same time, ED’s bosses in the White House continue to embrace the current accounting as a deficit reduction mechanism. As Jason Delisle, director of the federal education budget project at the New America Foundation says, “They have gone out of their way to defend it.”

Three issues arise from this – all distinct, all important. The first is political: Should ED generate a profit from student loans? The second operational: Will ED actually generate real profits, or will it fail to collect? This is a topic we’ll circle back to in a future UV Letter.

But it’s a different issue – the natural conflict at play here – that I want to focus on now. Because while the Administration proceeds at full speed with this strategy, it should recognize that the natural consequence of speeding is a ticket.

Research shows that tickets aren’t simply a function of speeding, they’re also a function of fiscal health. In a 2009 paper in the journal Law and Economics, Gary Wagner of the University of Arkansas and Thomas Garrett from the Federal Reserve Bank of St. Louis found that a 10% decline in the growth rate for a county's revenue prompted a 6.4% increase in the growth rate of traffic tickets the following year. Apparently this is already conventional wisdom in some states. Garrett and Wagner cite various officials predicting an increase in ticketing following a revenue loss or a failed initiative to increase local taxes. Moreover, three states already limit the amount of revenue a city or county can generate from traffic tickets. And California only allows municipalities to keep 20% of revenue from tickets; the rest goes to the state. Another study in the Public Choice Journal made a confirmatory finding: When law enforcement agencies are permitted to retain assets seized from drug arrests, the fraction of drug arrests to total arrests increases by 20%.

So even if student loan profits are paper profits, there’s no question that the Administration has an interest in sustaining paper profits to reduce paper deficits. Which raises the question: could this incentive have a perverse impact on federal education policy? For example, while ED’s official policy is to promote income-based repayment – three separate but similar plans (Income Contingent Repayment, Income Based Repayment and Pay As You Earn) that cap monthly payments relative to income – mass adoption of such plans would eliminate paper profits.

So when Jen Mishory, deputy director of Young Invincibles, a not-for-profit organization representing 18-34-year-olds, testified before last week that her organization recently held roundtables with students, and “none of the students we talked to had ever heard of Income Based Repayment,” it may only be a coincidence. But Secretary Duncan himself has acknowledged that ED hasn’t “done the best job of getting the word out.”

So ED could learn a thing or two from Rob Ford about getting the word out, as well as about natural consequences. The current structure where paper profits from student loans count toward ED’s budget and reduce the federal deficit may undermine ED’s own policies.

Let’s leave the last word on natural consequences to Mayor Ford, the Toronto intellectual and master of learning and personal responsibility:

What I compare bike lanes to is swimming with the sharks. Sooner or later, you’re going to get bitten. And every year we have dozens of people that get hit by cars or trucks. Well, no wonder. Roads are built for buses, cars and trucks. Not for people on bikes. And my heart bleeds for them when I hear someone gets killed, but it’s their own fault at the end of the day.

That’s the kind of thinking we want in our Secretary of Education. Too bad he’s otherwise occupied.