Most people understand “salad days” as the greatest days of one’s youth. The phrase was coined by Shakespeare and first appeared in the tragedy Antony and Cleopatra when Cleopatra, regretting her fling with Julius Caesar, says “My salad days / When I was green in judgment, cold in blood.”

Well, it turns out my salad days are now. And like Antony and Cleopatra, it’s a tragedy.

It all started when my mother introduced my wife to the Sweet Kale Chopped Salad Kit, a “restaurant-inspired blend of freshly chopped vegetables that contains 7 Superfoods including broccoli, Brussels sprouts, cabbage, kale, chicory, dried cranberries and roasted pumpkin seeds.” Found at Costco, my mom served the salad while we were visiting her Georgian Bay home over the summer. My wife loved it and vowed to find a local source. Since then we’ve been visiting Costco with greater frequency and urgency in order to stock up, and her salads have been getting progressively bigger.

My wife’s affinity for this salad knows no bounds. She has instructed her sisters to buy it. She has told her mother about it. Then last Saturday – a veritable “salad day” – she subjected the entire minivan-bound family to a Bluetooth-enabled salad phone call with her mother. Topics discussed for the listening pleasure of me and our three boys included: 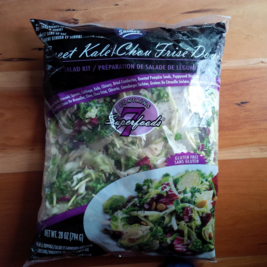 The call lasted over 20 minutes and covered no topics other than the salad. When the call mercifully ended, the van exploded with recrimination and befuddlement: “How could you talk so long about salad?” and “Does Supergirl [my wife’s new TV show] eat superfoods?” She turned to our boys and accused them of not even having tried the salad – and me of only having had a little bit. “If you’d actually eaten the salad – a big salad – you’d love it, too.”

While you’d be hard-pressed to find anyone who believes that colleges and universities are in their salad days, it’s certainly more plausible for big schools – the big salads of higher education: Big schools are doing relatively well, while small institutions are in the first act of a Shakespearian tragedy.

Small college troubles have received a lot of attention in the past year. While Sweet Kale may be having a good year, Sweet Briar, an institution with an $85M endowment, is not. After folding in March, Sweet Briar was reborn in June following an intervention by the Virginia Attorney General. Still, when September came around, only 250 women enrolled – half the enrollment level in the spring. 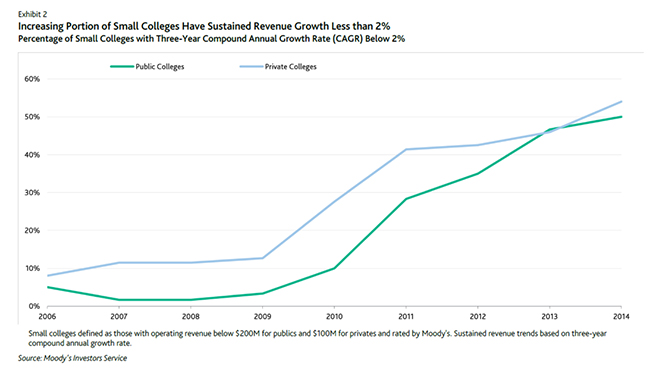 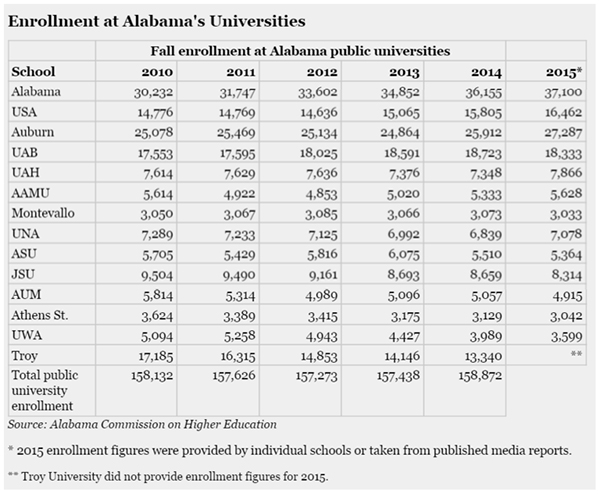 Skipping Arkansas and moving on to Arizona, Arizona’s largest university – Arizona State – has seen salad days in the form of 50% enrollment growth during President’s Michael Crow’s tenure. “Scale is your friend,” says Crow. “It lets you do things you couldn’t otherwise do.” For example, ASU’s eAdvisor program that keeps students on track. Or the many innovative projects and partnerships overseen by ASU’s EdPlus group. The common theme is technology. One of the tenets of Crow’s New American University is that technology helps scale instruction, and scale helps fund innovative technology. “We’re past the threshold of the naysayers —the people who are viscerally negative toward the introduction of technology,” adds Crow. “We see that we are actually teaching better. We’ve got better learning outcomes. We’ve got better empowerment.”

While this is almost certainly true, it was probably equally true (or nearly so) five years ago; it’s hard to argue that this has caused a dramatic change in student enrollment preferences. Likewise, the Moody’s analysis suggests that large schools can invest more in programs, student life and physical plant. But that was equally true five years ago.

What has changed? First, as Mark Becker, President of Georgia State University in Atlanta has pointed out, Millennials have become gradually more attracted to urban campuses, which on average happen to be larger than rural or suburban institutions. While not a sea change, it is contributing to the small school exodus.

The more important change is the dramatic fracturing of the media landscape in the last five years. As audiences have splintered, live sports – particularly football and basketball – have become the only remaining mass mainstream events this side of the Academy Awards. And NCAA Division I football and basketball have done a credible job of riding the coattails of big brothers NFL and NBA.

From an audience and revenue standpoint, Division I sports are enjoying their salad days, significantly enhancing the marketing power of Division I institutions. So the Alabama or ASU brands are more powerful for prospective students than they were five years ago. And as Division I schools’ average enrollment is 12,900 (vs. under 5,000 for all four-year colleges and universities), the result is a material increase in returns to scale in U.S. higher education. Roll Tide! Go Sun Devils!

First, to stop slagging on my wife’s salad or question the value of superfoods. The price of domestic disharmony is higher than the price of Sweet Kale.

Second, to apologize for prior rants against big time college sports. While there’s no question that tuition and fees allocated to subsidize football and basketball programs isn’t an optimal decision in terms of students’ ROI, supporting these programs is a rational response at the institutional level to the current landscape. And it’s conceivable that students who opt for scale over small could end up with a higher ROI on their tuition investment if hiring managers are equally susceptible to the increasing marketing power of Division I sports.

Finally – and this is the most important one – while colleges and universities will continue to see increasing economies of scale, I am almost certain to experience continuing diseconomies of scale from contact between my wife and my mother.

1. College Disrupted Washington Post report on Title IV demonstration program that will provide access to federal financial aid for coding bootcamps and other “just-in-time” providers, by Lydia DePillis and Danielle Douglas-Gabriel. The pilot comes at a time when the education and philanthropic communities are buzzing about the need to deliver credentials that employers recognize and value. Many businesses simply use a bachelor’s degree as a screening mechanism to identify people they think are likely to have the skills they need, even if the four-year degree wasn’t really necessary — which bars many competent people from jobs for which they might otherwise qualify. Read more 2. College Disrupts Itself Chronicle of Higher Education article on coding bootcamp developed by Northeastern, by Ellen Wexler. Level enrolls students for short, intense periods of study that do not lead to course credit. The program costs just under $7,000, and it caters to customers who want to make a quick career shift without investing in a master’s-degree program… it exists alongside Northeastern’s master’s programs in subjects such as urban informatics and information design and visualization. Read more 3. One Small Step for Transcripts, One Giant Leap for Education EdSurge op-ed by Matt Pittinsky on Indiana Common Transcript Initiative which replaces paper transcripts with structured data. With a paper transcript, often limited to a few pages, one size must fit all. But once we are talking about structured data, the possibilities expand… With data—years of math taken, math level, and math achievement—we know more about the student, all of which can result in better placement. Data also enables high schools to extend their transcripts to report extracurricular and other key activities. Read more