One joke we played in college has lasted nearly a quarter century. Senior year, we decided to turn the November issue of the tabloid newspaper we founded into a parody of People Magazine’s “50 Most Beautiful People.” The issue featured photos of students posing like fashion models accompanied by fawning profiles: “Oh, what eyes”; “mischievous smile and flowing locks of blond hair”; “She’s got legs and she knows how to use them. In cross-country, that is.” According to the editorial for the first issue of “Yale’s 50 Most Beautiful People,” written by my brother Aaron, “In the world, there are those that have, and those that have not. Most at Yale fall into the former category, and yet we are not all equal… Everyone at Yale has secretly admired and desired someone on this list. Let us end this secrecy! Shower the Beautiful People with garlands of praise. They have been chosen.”

It was clear to most that this was a joke. In order to find 50 willing subjects, we had to cajole; the letter that the “BPs” received didn’t even use the word “beautiful,” but rather euphemisms such as “pulchritude” and “campus presence.” As many rejected or ignored their selection, my brother felt the need to defend our authority: “By our logic, one of the defining characteristics of being one of the Fifty Most Beautiful People at Yale is having the courage to stand up and proclaim one’s beauty. Thus, anyone who lacked this courage is not beautiful. By this tautology, our list is perfect and complete.” 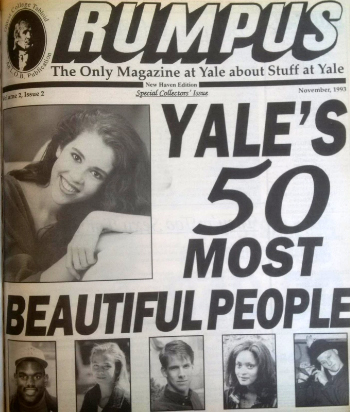 “50 Most” made a splash and has been doing so annually ever since (the 2017 issue was just published). But perhaps the most surprising lesson to come from BPs was how quickly something that started as a joke became a status symbol. Within two years, being selected as a BP had become a badge of honor. It became commonplace to lobby editors for inclusion. And we learned that at least one of the original BPs had listed her selection on her resume. (The one whose profile started with: “The Yale attack-wing streaks down the lacrosse field with the ferocity of a velociraptor. But we’ve never seen a velociraptor look quite the way Jane does.”)

Today, faster + cheaper pathways consist largely of certificate programs offered by community colleges and some universities. And they’re mostly a joke – programs students only consider if they can’t get into – or more likely can’t afford – a bachelor’s degree program. Why would anyone in their right mind forego the “college premium” – the income jump everyone sees upon completing a bachelor’s degree? The corollary of this, of course, are studies and media reports showing that while short-term certificate programs are being “pushed by community colleges and other higher education institutions,” they “provide almost no financial return to students.”

But hold on a moment. Almost everything is getting faster and less expensive. Watching a movie used to require going to the theater or video store. Now virtually every film worth watching is available from home. Cars appear at the touch of a button. Dates are arranged by swiping right. With “1-Click,” Amazon will deliver any of 500 million products to your door.

Millennials and Generation Z expect speed and convenience as a matter of course. So, for young people, perhaps the most remarkable aspect of modern American life is that education has hardly changed at all. Sure, students utilize technology at home and in class, although across primary, secondary and postsecondary education, technology remains supplemental to chalk-and-talk practices as old as the hills and to date not much more effective. And at least through high school, the forces of acceleration are counterbalanced by the prolongation of adolescence by helicopter parents and well-meaning educators.

But once teens leave for college and begin making independent decisions, why wouldn’t they seek a faster, cheaper pathway to real life rather than spending four years attempting to earn 120 credits and a bachelor’s degree?

Based on what’s happening to American Express, this could happen in short order. According to the New York Times, in the last seven months the credit card that for generations has “defined ostentatious luxury and capitalist striving” and charged cardholders up to $7,500 annually has lost its status among Millennials. Although American Express executives probably thought it was a joke when it launched last August, the Chase Sapphire Reserve card has already signed up more than a million cardholders, half of whom are under 35. Sapphire Reserve provides a sign-up bonus of 100,000 points and accelerated travel points. It’s faster + cheaper.

It’s also less ostentatious. As the Times points out, while American Express has essentially sold snob appeal for decades (“Membership Has Its Privileges” – sound familiar, colleges and universities?), “for Millennials, snobbery isn’t quite as appealing as it once was. Or more precisely, snobbery has to be hidden and camouflaged as something else, like an Instagram post from your Iceland spelunking adventure or a lament about how hard it is to find a charging station near Burning Man for your electric sports car.”

One of the strengths of American Express over the years has been its bundled travel services. Cardholders can access Amex concierges to book travel, restaurants, and even help out “if you leave your reading glasses inside a hotel room in Budapest.” But as the Times points out, “Millennials don’t really need travel agents or concierges: They have Priceline and Yelp. Nor are they traditionally fans of opera, ballet, Dom Pérignon tastings, or the other high-culture events Amex can get cardholders into. If you leave your reading glasses in Budapest, it’s probably faster to order new ones from Warby Parker, which is pretty cheap to begin with.”

According to the creator of Sapphire Reserve, “The message we send is, this isn’t your father’s credit card. For Millennials, travel might mean taking an Uber to a hole-in-the-wall restaurant in Chinatown, and then riding the subway to karaoke, and then catching a taxi home. So we’re going to give you accelerated travel points on all that. This is a card for accumulating experiences.”

Millennials and Gen Z are in a rush to accumulate experiences – including and especially work experience. So it may just take one or more innovative approaches to faster + cheaper to generate a Sapphire-size wave in higher education. While I’ll be exploring the contours of the most promising models in future pieces, I’m certain they won’t look anything like traditional community college certificate programs or associate’s degrees. And they’ll all provide a much higher degree of connectivity to work experience than we’ve ever seen before. As these innovative new pathways to good first jobs proliferate, Millennials, who are more interested in accumulating experience and being interesting than rich, are certain to follow.

The fact that alternatives to college are currently a joke is as much a tautology as my brother’s Beautiful People editorial: If every student with the requisite talent and grit to do well in the 21st century market economy chooses an Amex, then by definition American Express cardholders will have higher incomes than other cardholders. Same thing with bachelor’s degrees: by definition the “road not taken” will have inferior results. The question we should be asking is what faster + cheaper pathways will achieve when, like Sapphire Reserve, they gain status equal to Amex-like colleges and universities and attract comparable talent.

We’re about to find out. It wouldn’t surprise me one bit if Millennials and Gen Z who begin opting for alternatives in order to be interesting and gain experience become richer as well. (They’ll certainly be less indebted, not to mention more informed and motivated when it comes to deciding on additional postsecondary education beyond their entry-level job.)

Beautiful People and Sapphire Reserve demonstrate that status is mutable and always mutating. While still a joke today, faster + cheaper pathways to good first jobs are on their way to becoming a Sapphire-like status symbol. The result will be a muting of the economic and social power of colleges and universities that refuse to adapt.

1. Not Doing The Job Wall Street Journal article on report by Pew and Markle Foundations on The State of American Jobs, by Irving Wladawsky-Berger. Many college graduates said that their education had a generally positive impact on their personal and professional development. But, when it comes to preparing students for the workforce, Americans as a whole expressed their reservations. Only 16% saying that a college degree prepares students very well, and 51% said that it prepares them somewhat well. Similarly, 12% said that a two-year associate degree prepares students very well while 46% said that it prepares them somewhat well. Professional and technical certificates were viewed a bit more positively, with 26% saying that it prepares students very well and 52% saying somewhat well. Read more 2. Funding Apprenticeships New America Foundation report on new UK “Apprenticeship Levy” effectively requiring large and mid-size employers to launch apprenticeship programs, by Michael Prebil and Mary Alice McCarthy. Today, the U.K. will implement an innovative approach to financing the expansion of its apprenticeship system - and American policymakers should be watching. Collectively called the “apprenticeship levy,” the new system aims to solve a number of problems that face apprenticeship expansion in any system: getting employers engaged (especially smaller ones), and promoting programs for young people and in high-skill occupations. Here’s how it works… large employers with over £3 million in UK payroll will pay [a tax of 0.5% of payroll] into the system [which they can only use]… to spend on apprenticeship training for [their] employees. Read more 3. Google Reportedly Launching Competency Marketplace ERE Recruiting Intelligence blog post reporting that Google is planning Google Hire: an entire HR and employment ecosystem, by Joel Cheesman.
The product suite will include corporate career sites, an Applicant Tracking System, job feeds and ultimately an algorithm that actually helps paid job boards. Read more