Toronto in the 1970s and 80s was drab, grey and pretty much a cultural wasteland save in one respect: comedy. Comedy greats like Dan Aykroyd, Jim Carrey, Mike Myers and The Kids in the Hall got their starts in Toronto clubs in this era. Lorne Michaels left Toronto for New York and created Saturday Night Live. But for my money, Toronto’s most enduring comedic contribution of this era was SCTV. SCTV (Second City Television Network) established the careers of John Candy, Eugene Levy, Rick Moranis, Martin Short, Catherine O’Hara, Joe Flaherty, Andrea Martin and Dave Thomas. Americans of a certain age will remember Bob and Doug McKenzie (“Take off, eh?”). But with a format based on the programming day of a really bad local TV station in “Melonville,” SCTV was a cacophony of riotous celebrity impressions and unforgettable original characters that continue to resonate today.

One of the staples of the first season of SCTV – and my first exposure to distance learning – was a bit called “Sunrise Semester.” 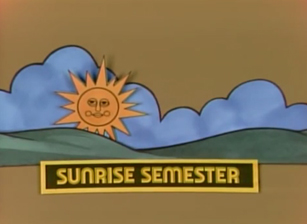 Each Sunrise Semester was a very short (2-4 minute) “course” taught by an instructor with an ulterior motive. For example, “Mort Finkel,” the instructor for Do-It-Yourself Dentistry is an alcoholic who uses pain as an excuse to drink. “Marcello Sebastiano” of Communicating in Italian is a womanizer. And “Moe Green,” played by the late, great Harold Ramis, is a socialist accountant voicing his critique of capitalism in his Essentials of Bookkeeping course. Finally, “Alki Steropolis,” teaching Classical Greek, is, in fact, Greek and teaches the immortal words of Pericles as only a Greek diner owner can:

Sunrise Semester cracked me up not only because it was absurd, but also because it played against the commonly held belief that educators had a noble purpose. And then there was the idea of being educated free-of-charge by a Melonville TV station – something I found vaguely ridiculous.

30 years later, I have a different perspective on Sunrise Semester. Published research continues to support the return on investment from a traditional college education, even for recent graduates. A recent Pew study reports the bachelors degree vs. high school only annual income differential for millennials ages 25-32 to be $17,500. Over a lifetime, that’s close to $800,000.

At the same time, there are increasing reasons to question this number and the idea of investing in just any bachelors degree:

1) The Self-Selection Problem
Millennials who have earned a college degree are more likely to be from supportive, wealthy, well-connected families. They’re also more likely to be resourceful and have the stick-to-itiveness that yields more remunerative employment. The typical result is they’re no longer working at Starbucks by the time they turn 25 – regardless of whether they have a college degree or not. No study has quantified the self-selection problem as a contributor to the income gap. But it is undoubtedly a major factor.

2) It’s Not The Degree
A recent study titled “The Economics of B.A. Ambivalence: The Case of California Higher Education” out of MIT and University of Minnesota-Twin Cities makes a convincing argument that any increase in the college/high school income gap vs. 1960 is a result of declining high school real income as opposed to increasing college income.

3) Playing Russian Roulette
This same study demonstrates that enrolling in a bachelors degree program is a risky decision – much riskier than a generation ago – as a result of skyrocketing tuition and student debt. Whereas as late as 1990, students graduating from California public colleges had virtually no chance of what the authors call “financial distress” (i.e., loan repayments 15%> of their income), today men graduating from California public institutions have a 38% chance of financial distress and women have a 55% chance. And if you’re deciding to enroll in a lower tier institution, the decision is even riskier.

Some of this is due to the fact that the aforementioned research calculating the annual or lifetime income does not account for student debt, income taxes or breaks in employment. Adding these to the equation, the average income gap may be as much as 65% lower (which would reduce the annual income gap in the Pew study to $6,000).

But, as Lauren Asher, President of the Institute for College Access & Success, says, “averages don’t tell the whole story.” With all of the above factors, we have entered a new era of unprecedented variance in returns to bachelors degrees. While degrees from elite institutions continue to generate high incomes and strong returns on investment, and Engineering graduates continue to do well, other degrees from lower tier institutions are producing net negative returns for students.

The fundamental problem is that while only 15% of all students enrolled in higher education are 18-22 year-olds who are full-time students at four-year institutions, the pricing of such programs has set something of a floor for the industry. But unless you’re attending an elite institution, the new rule of thumb should be to avoid paying more for a non-STEM bachelors degree than you absolutely need to. Otherwise it’s tantamount to paying double or triple the cover charge to get into the cool club, and then not having any money left for drinks.

It is axiomatic that as something becomes less useful, price needs to come down. Look at organs, for example. Organs used to be a major source of home entertainment. But now, with the advent of fancy home electronics, organ discounters like Tex and Edna Boil are forced buy time on SCTV to advertise unprecedented organ deals. 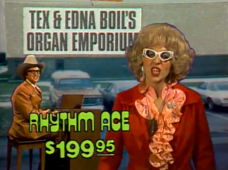 And even at these low, low prices, they need to resort to incredible giveaways to bring traffic into the store.

Lower tier colleges will soon follow Tex and Edna Boil’s lead. And the only way they’ll be able to lower prices substantially will be through online delivery. As we’ve discussed, online cuts the cost of delivery in half. And moving to a competency-based model cuts it in half again. So a degree that once cost $20,000 a year can be offered for $5,000.

Colleges where bachelors degrees have become as useful as learning Do-It-Yourself Dentistry should learn from Moe Green, Alki Steropolis and other instructors on Sunrise Semester: pursue online delivery aggressively to reduce price and increase student return on investment. Only then will the sun rise again on their institutions.