“The idea is that he’s got to be taken away, against his own will. Because it’s not good for him to do any more.” - Mick Jagger

A new documentary, Mr. Dynamite: The Rise of James Brown, chronicles the life and times of the Godfather of Soul. When he was young, Brown shined shoes and lived in a brothel in Augusta, GA before serving time in juvenile detention for robbery. But his hustle upon being paroled at the age of 19 anticipated the emergence of the “hardest working man in show business.” Within a few years, Brown joined a gospel/R&B band as the drummer, supplanted Bobby Byrd as lead singer, changed the group’s name to the Famous Flames and wrote and recorded his first million-selling hit based on something Little Richard had written on a cocktail napkin during a meeting: Please, Please, Please.

The success of “Please, Please, Please,” which was the impetus for changing the group’s name to James Brown and the Famous Flames, is largely credited to Brown’s live performance. Overcome with desire and emotion for his lost love, Brown would fall to his knees clasping the microphone stand, drenched in sweat and seemingly exhausted, continuing to belt, yell and plead “Please.” This prompted the show’s MC, Danny Ray, to come to the front of the stage and drape a cape over Brown’s shoulders, hiding him from the audience, attempting to lead him off the stage. Brown would limp off, cape in tow. Then, suddenly, he’d throw off the cape and sprint back to the front of the stage, continuing: “Please, Please, Please.” When he’d go down on his knees again, the Cape Man would come out in another attempt to keep Brown from hurting himself, and the cycle started again. Rinse and repeat. 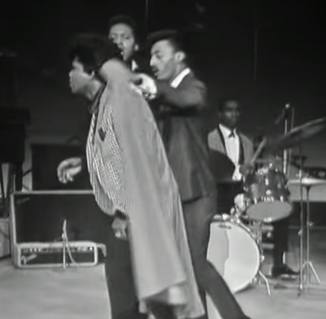 The Cape Man keeps his employer from hurting himself.

The Cape Man routine during “Please, Please, Please” could go on for as long as 20 minutes as the band kept playing, The Famous Flames kept dancing and singing the background vocals (“Please, please don’t go-oh-oh,”) while no cape or Cape Man could constrain Brown from risking his health by continuing to perform. The audience had never seen anything like it and was left as emotionally drained as Brown himself.

It turns out the Cape Man bit came from professional wrestling. Brown had seen the wrestler Gorgeous George do the same thing, and instructed his Cape Man accordingly: try to get me to stop, but I’m going to keep going; the audience will be mesmerized.

In higher education, the mesmerizing show is Division I football and basketball. Tens of millions of fans tune in each week to see their favorite universities compete. But it’s been a challenging few years for the NCAA. The fake classes scandal at UNC Chapel Hill discussed in the last Letter follows the Jerry Sandusky scandal at Penn State. In both cases, respected leaders at Tier 1 research universities broke all kinds of rules in order to further their football and basketball programs.

The NCAA is the Cape Man of U.S. higher education. When a university appears to be hurting itself in pursuit of athletic glory, the NCAA comes to the front of the stage to drape a cape over the institution – in the form of an investigation or penalty. Then the show goes on. Often, the university comes back as quickly as James Brown – like Penn State, which was supposed to sit out of bowl games for four years, but is suddenly back in contention this season after sitting out only half the allotted time.

The relationship of the NCAA to its 1,200 universities is effectively one of employee to employer, like Danny Ray to James Brown. The message is the same, with the universities telling the NCAA: try to get me to stop, but I’m going to keep going. As such, the NCAA’s penalties are often for show. This was the case with the $60M fine levied on Penn State in 2012, to be contributed to a national fund for victims of sexual abuse. E-mails disclosed in a lawsuit reveal that the NCAA bluffed Penn State into agreeing to the $60M fine, knowing it did not have the jurisdiction to impose the penalty. Two years later, with the media spotlight shining elsewhere, the NCAA agreed to allow Penn State to spend the $60M on its own program, eviscerating any effect of the fine.

“It’s obviously an act. But you worry about him.” - Mick Jagger

While James Brown only appeared to be hurting himself, the audience should be worried about higher education, where appearances are beside the point; as noted in Inside Higher Education this week, big-time football and basketball are systematically undermining the missions of Division I colleges and universities.

The fiction that elite athletes are typical students representing universities is maintained in two ways: (1) they attend classes, earn credits and (attempt to) graduate; and (2) they are not paid for their work on behalf of the institution. But elite athletes are not typical students. In 2010, UNC freshman football players had SAT scores that were 300-400 points lower than the average UNC freshman. At Berkeley, basketball players are 350 points below the average SAT score. And at Georgia Tech, it’s 396 points.

Still, this fiction is essential. Without it, Division I football and basketball teams wouldn’t have a built-in fan base of hundreds of thousands of alumni and friends. And if they had to pay players the percentage of revenue expected in professional sports (~ 50%), the subsidy colleges and universities would have to provide to these athletic programs that generate so much “free” advertising and PR would be so obvious and objectionable, not even the college cape man could obscure it. As with James Brown, this show (of amateurism) is financially beneficial for the institutions and their employee, the college cape man.

The NCAA has tried to drape the cape over these fundamental issues. It spent millions defending a lawsuit from former players contending that the NCAA and its constituent universities conspired to benefit from the likenesses of college athletes in video games and broadcasts without any compensation. It also fought a claim before the National Labor Relations Board that under federal labor law, football players at Northwestern University are university employees.

Fortunately the NCAA lost both cases. So this time it may not be so easy for universities to throw off the cape and sprint back to the front of the stage. When an institution of the caliber of UNC Chapel Hill systematically creates fake classes for 3,100 students over an 18-year period, when Michigan steers athletes to independent study courses taught by a known “easy grader,” or when Stanford provides athletes with a list of “easy” courses they can take, it’s more serious than James Brown falling to his knees, yelling please. It’s more like a heart attack – the entire academic enterprise in serious jeopardy – despite the best efforts of the NCAA to shield the truth from the audience. As Mark Schlissel, President of the University of Michigan acknowledged to the faculty senate last week, “We admit students who aren’t as qualified… [including students] that can’t honestly, even with lots of help, do the amount of work and the quality of work it takes to make progression from year to year.”

Big-time college sports are transforming higher education into a show not dissimilar to that staged by the hardest working man in show business. Perhaps the only difference between James Brown and Division I football and basketball is that the former is the Godfather of Soul, while the latter has no soul.