The Skills Gap and the Spit-Take

The gap is most keenly felt in certain sectors. A recent Adecco survey shows that 92% of technology executives believe there’s a skills gap. Perhaps more alarming is that less than half have confidence in higher education to prepare students for the workplace. And as skilled workers in the U.S. earn a larger wage premium over unskilled workers than in other developed countries, we clearly have a breakdown between high-and-growing demand for skilled workers and a stagnant supply.

At University Ventures, we spend all our time focusing on ways to make traditional higher educational institutions more innovative and competitive. But to fully understand the skills gap, it’s important to look at the role of employers.

Germany is widely acclaimed as the developed country with the smallest skills gap, largely due to its famed apprenticeship programs. I’m often asked by German friends why American can’t develop a similar apprenticeship model. When I’m asked this question, my thoughts turn to my brother Aaron.

Aaron enjoys dining out with strangers. Not for stimulating conversation, but so he can surprise them with his patented “spit-take.” You see, Aaron will ask for the server for the check. As he receives it, he confidently tells his new friends: “The prices here are always so reasonable.” Then he takes a drink of water as he looks at the check. 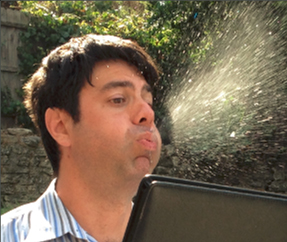 Dining with my brother is often a stormy affair.

This is exactly how American employers react to unskilled workers. When presented with a candidate imperfectly prepared for an open position and requiring training, our employers do a spit-take.

Here’s how the German apprenticeship model works. Students attend school one day per week and work at the employer as an apprentice the other four days. The (free or virtually free) vocational program lasts two or three years while the student works as an apprentice and provides the necessary classroom training for a job in the industry. The commitment on the part of employers is as follows. First, they pay minimum wage to students for time spent on the job. Second, they provide meaningful on-the-job training. Third, employers participate in developing both the classroom and on-the-job curricula. Fourth, at the end of the program they have the option (but not the obligation) to hire apprentices as full-time employees. Finally – and crucially – employers also engage at the start. Students can’t commence the vocational program until they’ve secured an apprenticeship at an approved employer. So employers interview and select apprenticeship candidates on the front-end.

Compared to Germany and many other European countries, the U.S. has always been culturally disadvantaged on this point. In Germany, human resources is viewed as strategic. HR heads sit on corporate boards and advise CEOs. This – along with government prodding and support – has produced the current high level of employer engagement in the apprenticeship system. In America, HR typically doesn’t report into the CEO; it’s positioned several levels down in the organization. Most companies have attempted to automate hiring in order to reduce HR headcount and costs. Any new investments in HR need to demonstrate a near-term ROI. This has produced the American spit-take.

As for technology, so far it has facilitated the spit-take. Employers use application tracking systems to create job descriptions and manage applications. Application tracking systems encourage HR and hiring managers to incorporate any and all possible beneficial experience and credentials into the job description to the point that many open positions become searches for unicorns; such candidates do not exist. Anecdotes abound of job descriptions that include a surfeit of requirements. For example, a mechanical engineering position that requires three years’ experience, working knowledge of various software programs, and the ability to type 65 words per minute. For many positions, requirements have become so detailed and numerous that most successful current employees in the same job don’t pass.

At the same time, the ability to apply online means that employers now routinely receive 100+ applications for every open position. Application tracking systems utilize keyword filters to sort resumes based on the language in the job description, which has yielded the phenomenon of “resume spam” – candidates incorporating the actual job description in white (invisible) text on their resume in order to pass the keyword filter.

As a result, employers are getting more false positives in the hiring process – candidates who make it through the screen but ultimately aren’t a good fit – particularly when compared with detailed job descriptions. Yet the sheer quantity of applications encourages American employers’ fantasy of the “perfect fit.” This is an important reason why America has over 3M unfilled jobs. But it’s also why American employers have never been less disinterested in training new hires. According to a 2011 Accenture survey of U.S. employees, only 21% received any employer-provided formal training in the past five years.

On-the-job training is likely the biggest lever America can pull to close the skills gap. Sadly, only a handful of American companies operate anything resembling an apprenticeship program.

Rather than looking to employers, federal and state governments have focused on community colleges establishing co-op, internship or workforce training programs in collaboration with local employers. The key elements of such programs – hearkening back to the German model – are:

There are a handful of successful community college-operated programs that check these boxes. Several community colleges have a relationship with Pacific Gas and Electric to deliver a PowerPathway program. For its first class of 70, the program received over 4,000 applications (an admission rate of 1.75%). These community college-delivered 12-week courses have trained over 160 individuals and PG&E estimates its new hires from PowerPathway are six months ahead of other new hires. This translates to a $30k savings in time-to-productivity.

But the vast majority of community college-operated programs check the first three boxes, but fail to engage employers until late in the process. This makes community college-organized workforce training programs a gamble compared to the German system where incoming students have employer contact at the start and are reasonably confident they’ll obtain a full-time position if they succeed in the program.

A more promising approach is the emerging “broker” model. A third party – typically a for-profit company – acts as a broker between employers and higher education institutions (HEIs). The broker works with the employer to create an RFP for a training program based on employer hiring needs and then circulates the RFP to local HEIs. Then the broker selects the HEI, finalizes the curriculum, and returns back to the employer so that the employer can review and then commit to hiring a certain number of graduates from the program.

This guarantee solves the HEI’s student acquisition model: the HEI can market its new program by guaranteeing jobs at defined employers to a certain number of successful completers. The broker is paid by the employer, typically a fraction of new hire wages over a defined period of time. As long as the program produces a strong tuition-to-salary ROI for the student (i.e., program needs to be affordable), this is a much more scalable model than depending on community colleges to engage employers.

Even once broker models proliferate, America will still be at a disadvantage relative to Germany. In Germany, participating in an apprenticeship program is respected and viewed as a viable alternative to a degree. In America, as Germany’s Sebastian Thrun recently explained to me, we still face switching costs.

One of Sebastian’s good friends was a founder of Expedia and Zillow. Sebastian observes that Expedia was successful in getting consumers to switch away from travel agents because the switching cost was relatively low; if you make a mistake, it’s only a $500 decision. But Zillow was not successful in its ambition of getting consumers to switch away from real estate agents; if you make a mistake here, it’s a much bigger mistake. So switching costs are much higher. With regard to higher education, switching away from a degree is an even bigger decision than selling your house. Such a decision stays with you for life. Based on current data, the average result will be 40% less income.

Defining and recognizing job-relevant skills is the true challenge. Fortunately, emerging competency management platforms are beginning to make skills much more visible to employers. By utilizing big data techniques, it will soon be possible to evaluate job-seeker skills across hundreds of dimensions and compare them to job requirements as defined by thousands of employers across similar open positions.

In stark contrast to the current employer spit-take at getting involved with new hire skill assessment and development, a decade from now it’s likely that the employer spit-take will be reserved for those job-seekers who seek employment without competency profiles, as well as for HEIs that leave graduates unprepared in this regard.

When this happens, switching costs will drop precipitously. The “unbundling” of higher education will deemphasize the importance of the degree and increase the importance of skills or competencies, as determined by technology as well as assessments. This will further accelerate the growth of new American apprenticeship models that brokers are now pioneering and go a long way to closing the skills gap.

Thanks to Sebastian Thrun for his contributions to this Letter.