Road to Nowhere: The Tragedy of Associate Degrees

A new shopping center was recently unveiled in my town. I took my 9-year-old son Hal to the opening and he was impressed with the giant scissors wielded jointly by the developer and mayor to cut the ribbon. Hal asked if we could get a pair of giant scissors. I said no, although they’d probably spare us the “running with scissors” problem, and tried to distract him by talking about the few times I’ve been at public events where giant checks are presented. Hal was fascinated with the idea of giant checks and, after some discussion, we concluded that events like these are likely to feature giant scissors OR giant checks, but not both at the same time.

Which got me thinking: the next time there’s a public event to celebrate the opening or expansion of a community college, it might make sense to bring both: cut the giant check with the giant scissors to signify the money being wasted.

What community colleges represent is clear. They were the first higher education institutions in the community at a time when four-year colleges and universities were inaccessible to all but a small segment of the population. As the first open-enrollment institutions, they revolutionized accessibility in an era before a college degree became the sine qua non of the labor market.

What may be confusing President Trump, though, is that community colleges have always served two masters. First, vocational programs in building and industrial trades with which four-year institutions don’t wish to concern themselves. These certificate programs have evolved to span other sectors of the economy and, with some exceptions, lead circuitously or directly to employment.

The colleges second offering are associate degrees. The thirteen saddest words in higher education may come from a comment on the job site Indeed: “I've got a two year degree in Individual Studies from Alfred State College.” The post went on to say: “You'd think that having any degree would do me some good in finding a decent job right? But all I seem to be able to get are really crappy jobs. What kinds of jobs would I qualify for with this type of degree?... I've got what seems to be a useless piece of paper with a title on it.”

Not all associate degrees are created equal. Some act like certificate programs, effectively validating students for a particular vocation. But even in these fields, like nursing, employers are increasingly requesting or requiring four-year degrees. Hiring managers, who usually have bachelor’s degrees themselves, perceive associate degrees as of the same genus, but “less than.” So why not demand the real thing? (As opposed to certificates, which are viewed as a different species – if you’re being hired by an apple, better to be an orange than an inferior apple.)

Employability is a huge problem for associate degrees. The more problematic associate programs are for students who don’t plan to end there; over 80% of students who enroll in associate programs at community college intend to transfer to four-year institutions. Of course, only 32% actually do within six years, and fewer than 15% earn a bachelor’s degree in that timeframe. The trouble is transfer. A GAO report from last summer revealed that students who transfer lose 43 percent of credits they’ve earned, which means even more time for life to get in the way.

General studies associate programs at community colleges are a road to nowhere. I recently gave a talk to a regional business group and one of the attendees was the President of the local community college. He claimed only a small minority of his students were enrolled in associate programs. I had two reactions: (1) That’s probably not true; and (2) Why so defensive?

But my second reaction makes the point more clearly: If you find yourself in a defensive crouch over general studies associate degrees, it’s probably an indication you should stop enrolling students in them.

I understand why this is hard. First, the majority of community college students are enrolled in academic programs conceived of and led by academics who, by and large, would prefer to work at a selective four-year college, or a facsimile thereof (and were probably educated there); associate programs with general education upfront are at least a facsimile of where they want to be. Second, figuring out what certificate programs to offer requires dealing with employers, which is exhausting, and often unfruitful. It also requires attracting and enrolling students in shorter programs, which is a ton of work for admissions and financial aid departments. Much easier to enroll students who will stick around for a few years, or at least plan to. Finally, driven by the transfer dream, associate programs at community colleges have become a cheap and seemingly convenient point of entry for public four year institutions: broken on-ramps leading to nowhere.

I’m not so naïve as to believe that community colleges will ever give up general studies associate programs. But for any community college that wants to offer these programs with a clear conscience, frictionless transfer should be a requirement. By frictionless, I don’t mean articulation agreements that delegate recognition of transfer credits to the departmental or faculty level. I mean something like Virginia’s dual admission program.

Dual admission plans require aligning course learning outcomes across two different institutions and aren’t easy to execute. So you won’t be surprised to learn that only one of the Commonwealth’s universities is respecting both the letter and spirit of the law: George Mason, through its relationship with Northern Virginia Community College. The GMU-NOVA CC partnership is, as one dean says, “an articulation agreement on steroids.”

I want to mention one final negative repercussion of general studies associate degrees. To the extent “predatory” for-profit colleges remain a significant problem in higher education, they’re largely a market response to community colleges’ continued reliance on associate programs and the resulting unnatural and typically tragic break at the point of transfer. This break is directly responsible for tens of millions of working adults with an expectation of college completion that for-profit marketers have ably filled.

States that are serious about improving postsecondary outcomes will follow Virginia’s lead and require all public institutions to do the hard work of implementing dual admission. Or they can feel free to keep writing giant checks to their community college systems. Just don’t forget to bring along the giant scissors.

Study Finds Law Schools Are Losing $1.5 Billion Annually in Tuition Not only [has] class sizes shrunk significantly at many schools, but… fierce competition for students brought down the actual cost students pay for a law degree. Read more

LinkedIn Launches Talent Hub to Recruit Applicants with Predictive Insights Talent Hub — an applicant tracking system [for SMBs] — [is] a sourcing and hiring platform that ties together many of its existing products, including LinkedIn Jobs and Apply with LinkedIn. Read more 3. The Flipped Hiring Revolution EdSurge commentary suggesting that new educational pathways that allow employers to “try before they buy” have many benefits for students, as well as many implications for traditional higher education. Deferring hiring decisions until after candidates start work can eliminate Hiring Friction, thereby reducing the burdensome requirement of pedigree accumulation. Candidates can be judged more on the basis of their will and skill, and whether they are ready to succeed in a job at the present point in their lives. Read more 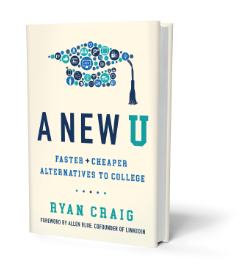