Try Before You Buy

Those of us who attended college in the Paleolithic, pre-Internet, pre-smartphone era will recall that there was a way to contact other students: call the landline phone in the dorm room. At my school, every other student was five digits away; we’d dial 6, followed by the dorm room number. While this was convenient, it meant that some rooms were riskier than others.

Junior year, I wrote an article about a medical school student who received dozens of calls each day from other students attempting to order pizza from Domino’s. Why? Because instead of first dialing 9, then the Domino’s number (624-3317), hungry pizza seekers would often forget to punch 9, dial 62433, and reach Mina Chung in room 2433. “They leave messages on my answering machine with their pizza orders,” complained Mina. “Sometimes they call in the middle of the night. I suffer from sleep deprivation.” She said she was so frustrated by calls from strangers craving pepperoni, sausage, mushroom, and double cheese that she was considering pretending to take the orders herself.

Mina’s story, which ran under the headline, “No, This Isn’t Domino’s, Jerk,” demonstrates the value of trying before you buy; Mina should have spent some time in that dorm room before selecting it. Trying before you buy is common across a range of consumer products – from cars to ice cream. Even colleges and universities invite admitted students to campus every spring, allowing them to try before they buy a four-year degree. But a new “try before you buy” trend is about to impact colleges and universities as never before: employers seeking and expecting to try new and recent college graduates before they hire them into entry-level positions.

The crisis of employability facing America’s college graduates is a component of the broader skills gap: 7 million unfilled jobs – many of which are the high-skill and middle-skill jobs sought by millions of underemployed new and recent grads, as well as tens of millions of Americans working in declining or stagnant sectors of the economy.

There are two reasons why the skills gap persists in a full-employment economy. On the student or candidate side, there is “Education Friction.” Education Friction is why individuals fail to upskill themselves with the skills demanded by employers. This is a result of the time required to upskill, the cost, and – most important – the uncertainty of a positive employment outcome. The second and often overlooked contributor to the skills gap is “Hiring Friction” on the part of employers; employers are increasingly reluctant to hire candidates without exact relevant experience. The cost of a bad hire is higher than ever, as is employee churn, as is the cost of replacing terminated employees – all of which have contributed to an increase in experience requirements for positions that should be (and once were) entry level. A recent analysis of over 95,000 job postings by job-matching software firm TalentWorks revealed how difficult it can be for newly minted grads to find an entry-level job. The research found that 61 percent of all full-time jobs seeking entry-level employees required at least three years or more of experience. Many employers have become so risk averse in hiring for entry-level positions that candidates who haven’t done the job before don’t have a shot; for many employers, the concept of a good entry-level job has collapsed under its own tautological weight.

From time immemorial, all serious education, training, and workforce efforts to close the skills gap have started by identifying missing skills, developing curriculum, and delivering programs. These “Education Up” models are logical, but also easy. The hardest part of the skills gap is not identifying skills or skill building, but rather building the bridge to employers. Few employers alter their hiring practices to account for Education Up programs that graduate a few dozen graduates each year, let alone guarantee employment. Few are organized to even have a conversation about it. The rare conversations that do occur are typically with a philanthropic or external-facing arm of the employer – not with anyone directly involved in hiring at scale. Most important, Education Up models ignore Hiring Friction.

Reducing Hiring Friction means proving to employers that candidates for entry-level positions can do the job. One obvious way do this is to utilize cognitive, behavioral, and situational judgment tests at the top of the hiring funnel. Unfortunately, employing such assessments risks running afoul of 1970s-era labor law if they have an adverse impact on a legally protected group. To avoid adverse impact actions from the Equal Employment Opportunity Commission (EEOC) or – increasingly under the Obama Administration – the Office of Federal Contract Compliance Programs (OFCCP), employers must demonstrate content validity, construct validity, and criterion validity for each assessment-job pairing. This means conclusively showing that each assessment is predictive of performance for each position where it is used. Doing so is so time- and resource-intensive that only a handful of U.S. employers are willing to make the effort.

The urgent need to reduce Hiring Friction, coupled with the regulatory barrier to utilizing assessments at the top of the hiring funnel, is giving rise to new models that are the antithesis of “Education Up.” These new “Employer Down” models start with employers and the entry-level positions they need to fill, and eliminate Hiring Friction by allowing employers to try before they buy. Staffing and business services companies are hiring candidates themselves, providing Last-Mile Training, and placing newly-trained talent at the service of employers so they can try before they buy. Some Employer Down models add a new “emerging talent” product to an existing talent business (i.e., staffing or placement). Others establish outsourced apprenticeship programs to add a talent dimension to an existing business service (i.e., providing not only digital marketing services, but a pipeline of purpose-trained, proven digital marketing talent), which can boost pricing power, increase market share, and accelerate growth. What they have in common is that candidates are hired and trained by the provider and then, while remaining employed by the provider, perform work for clients; clients convert candidates to full-time employees only when they’re good and ready. Here’s what else they have in common: scalable business models built around the provision of proven entry-level talent.

Another advantage of an Employer Down approach to closing the skills gap is by not demanding an immediate hiring decision, Employer Down providers often circumvent the formal human resources (HR) function, which increasingly has become a compliance/risk management gatekeeper rather than a talent management role. Employer Down means working directly with hiring managers and business units. HR only gets involved later on, at the time of the hiring decision, after the talent has proven they can do the job – a much easier decision. As a result, Employer Down models are scaling faster than it takes to order a Domino’s pizza.

The power of frictionless pathways to good first jobs will soon be felt by America’s colleges and universities. A value proposition that guarantees a good entry-level job at no cost or financial risk is the polar opposite of traditional higher education’s “you pays your money, you takes your chances.” Braving Hiring Friction by hiring directly from college campuses will continue to make sense for many employers, particularly recruiting from selective universities where the caliber of talent is consistently high. But as employers are given the option to try before they buy, many will opt for Employer Down over having to make immediate, uninformed hiring decisions. American employers lead the world in outsourcing non-core functions, or functions they don’t perform as well as specialists. Entry-level hiring is widely perceived to be broken and, as Employer Down models emerge, will be the next major business function to be outsourced.

“Education Up” colleges and universities are ill-prepared for the coming of Employer Down. While many staffing and business services companies that add entry-level talent provision to their value propositions will recruit from the pool of new and recent college graduates – where the most talented and motivated candidates are unquestionably found today – some will supplant traditional college by providing a complete, faster + cheaper pathway to employment. Colleges facing declining enrollment may seek to build their own Employer Down models. But Employer Down can’t be built out of thin air. Employer Down builds on the staffing company or business service provider’s a priori relationships with employers and hiring managers – the relationships that traditional Education Up models have such difficulty establishing. These relationships – built over years around the provision of a service to the employer, whether experienced talent (staffing) or another service – are much deeper than the superficial relationships established by higher education’s poor interface to the labor market (i.e., career services).

But whether by partnering with these new providers, or somehow absorbing Hiring Friction themselves, colleges and universities – and all Education Up programs – will need to get a handle on Employer Down. Unless they can figure out how to allow employers to try before they buy, more and more of their graduates will end up delivering pizza for Domino’s.

1. Brand New Credentials TechCrunch op-ed on how global brands have the potential to create high value postsecondary credentials, by Carol D’Amico and Daniel Pianko. Who will hospitality hiring managers trust to credential students: Cornell University or the Four Seasons? Will it be Google or Penn State that sets the standards that determine who qualifies as a good computer programmer? Could GE define competency in aeronautic engineering rather than Vaughn College? Should employers place more value in a fashion credential backed by the editors of Vogue or the Pratt Institute? Read more 2. Brand New Apprenticeships CNBC interview with Heather Terenzio, Founder and CEO of Techtonic, on the first registered apprenticeship for software development. We are background agnostic. We don’t care where you’ve come from. We don’t care if you have a college degree, or if you’re a self-taught software developer. We will pay people on day one, and that’s part of being an approved DOL apprenticeship program… So we can pay people who were baristas just a few months ago, pay them a livable wage, and train them to be great software developers. Read more 3. Brand New Book Chronicle of Higher Education Q&A on upcoming book A New U: Faster + Cheaper Alternatives to College. To be clear, in suggesting that some students will be better off selecting faster and cheaper alternatives, I’m not arguing for less postsecondary education in aggregate or per capita. That would be economic suicide for America in today’s globalized knowledge economy. What I am arguing for is a restaging of how postsecondary education is consumed. It needn’t be “all you can eat in one sitting.” After a faster and cheaper pathway and success in gaining a good first job, students will absolutely need pathways to boost their cognitive and executive-function skills, in order to move on and move up in their careers. Colleges and universities are best positioned to develop and deploy these cognitive skill-building secondary and tertiary pathways. Read more 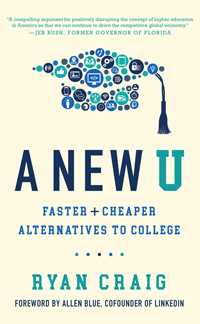 Available for order at BenBella Books
or Amazon.