In the early 1980s as video began killing the radio star, the paradigm of male licentiousness was Van Halen lead singer David Lee Roth. Known for his spandex pants, mesh tops and scarves, heavy eyeliner and long, flowing blonde hair, Roth combined the fashion sense of glam rock with the aggressive heterosexuality of heavy metal. But parents could care less about antecedents. To them, David Lee Roth was Runnin’ with the Devil. 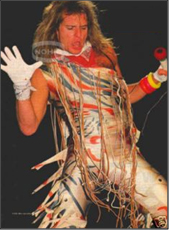 Concert promoters thought the same thing, but for a very different reason. When a promoter sought to book Van Halen for a show, Van Halen provided the promoter with a contract rider outlining the promoter’s responsibilities. According to Roth, “most rock and roll bands had a contract rider like a pamphlet. We had one that was like the Chinese phone book.” So while staging concerts for other bands was as easy as Dancing in the Street, Van Halen concerts were more of a Mean Street.

Right in the middle of the Van Halen rider was a stipulation was that while M&Ms must be provided backstage, there were to be no brown M&Ms. If any brown M&Ms were found, the promoter would be in breach and the band would get paid without having to play.

Word got out about the Van Halen Brown M&M clause and for years it represented the apex of rock excess: forcing someone to search through M&Ms and remove the brown ones. The Brown M&M clause is parodied in Spinal Tap where Nigel Tufnel complains to his manager about his inability to fit normal size cold cuts on miniature bread:

“But then if you keep folding it, it keeps breaking. And then everything has to be folded, and then it’s this. And I don’t want this. I want large bread.”

But the Brown M&M provision is as interesting as it is amusing. Van Halen’s show was bigger and more complex than any arena production that had come before. Roth was playing some very old buildings with a range of structural issues e.g., insufficient voltage or amperage, inability to accommodate the 850 par lamp lights Van Halen needed for its show, load bearing restrictions on stage. As a result, Roth inserted the Brown M&M provision, because if he found one, he was quite happy to say “I’ll Wait” while his crew checked everything. In a 2012 interview, Roth explained the true story:

“If I came backstage and I saw brown M&Ms on the catering table, it guaranteed the promoter had not read the contract rider and we had to do a serious check. Because frequently we had danger issues… Well, after seeing brown M&Ms and ceremoniously and very theatrically destroying the dressing room to try to get the message across lest we have a disaster… the word got around, ‘hey, take this seriously.’”

The Brown M&M provision is the perfect solution to the complex situation Van Halen faced as it was playing new venues: an easily discernable metric that effectively signals whether there is a problem. In the same way, universities need a Brown M&M provision that establishes a clear signal as to whether students are actually learning. In higher education there’s a general perception that sticker price is a signal of quality. But while sticker price (note: not net price) is easily discernable, it is an exceptionally poor signal. Many universities with high sticker prices do a lousy job of educating students, and many with low prices do an excellent job.

Universities are complex and difficult organizations because there are no clear, agreed-upon metrics to determine whether there is a problem. If David Lee Roth had less musical talent and better taste in apparel, this son of a very wealthy eye surgeon might have been a university president. (It would have been a loss for MTV and the country of Panama, but a gain for higher education. President Roth would have developed a similar metric for his institution and – given the technical wizardry of Van Halen shows – utilized technology to do so.

The first thing President Roth would do is transform traditional campus-based courses to hybrid courses. This means not only flipping the classroom (moving lectures online with integrated formative assessments, reserving classroom time for discussion of areas where students have not demonstrated understanding), but also instituting dynamic classrooms where students are actively engaged during class, providing real-time engagement data to faculty. Then it’s an easy step to aggregate this data into a simple engagement metric per student, per course, and per faculty member.

With all the pressures on colleges and universities, it’s getting too Hot for Teacher. President David Lee Roth would help cool things down and make sure that when it comes to higher education, Everybody Wants Some.

Thanks to Marty Waters of Wilson Sonsini for sharing the M&M story.