Waystation on the Road to Badges: Double-click Degrees

“By 2020, America will once again have the highest proportion of college graduates in the world...
So tonight I ask every American to commit to at least one year or more of higher education or career training... every American will need to get more than a high school diploma.”

President Obama entered office with a very clear priority for higher education: regaining America’s rightful place as the world’s most educated nation. Doing so would have required educating an additional 10 million students beyond the current pace and effectively increasing higher education attainment for adults 25+ from 40% to around 55%.

At the time, there were many skeptics. We had entered a recession. And as the graph below shows, while other countries had made remarkable gains, we’d been stuck around 40% for a generation. 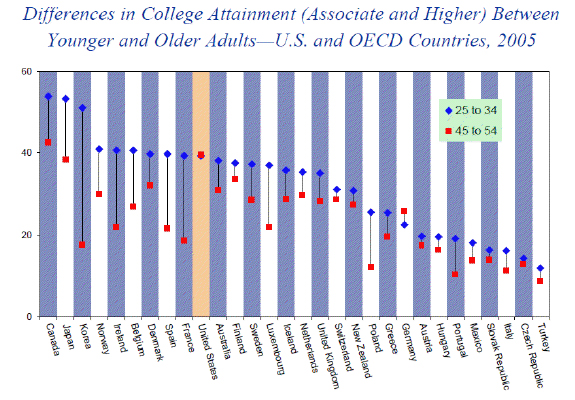 What’s become clearer since 2009 is that the cost of a massive increase in degree production is prohibitive. The annual cost of educating these additional students is $30-40 billion before accounting for tuition increases. If these students are to be educated at state-supported institutions, this would amount to a 40%+ increase in state support for higher education – a laughable proposition in a world of annual double-digit declines.

The motivation behind increasing degree production is noble. Mapping GDP per capita vs. average educational attainment on a state-by-state basis, one sees an increasingly tight correlation over time – to the point where it’s now virtually a straight line from West Virginia to Connecticut. So “college completion = economic performance” has become a catechism for policy makers.

But when increasing college completion becomes unrealistic – at least until innovative new technology- mediated programs radically reduce the cost of earning a degree – it’s important to understand that the rationale for college completion is to improve economic performance. And you can’t watch TV these days without seeing a political advertisement talking about the #1 economic issue: jobs. Since President Obama took office, the private sector has created 4.4M jobs. In contrast, the recovery from the 1981- 82 recession yielded 9.5M new jobs on a smaller base. At the same time, 7M have abandoned the job market while there are currently 3.7M unfilled jobs in the U.S., including 600,000 in manufacturing.

It’s clear we have failed to properly re-skill our workforce. And as no one disagrees with the President that “every American will need to get more than a high school diploma,” the college affordability crisis has resulted in thousands of college educated thought leaders streaming out of the higher education tent in search of alternative credentials.

With MOOCs continuing to make headlines, “badges” has become a fashionable construct. Like the boy and girl scouts they once were, educated adults won’t flaunt their degrees as much as a collection of badges testifying to skills or competencies that they have demonstrated. The key question is: by whom? Who will vouch that this student demonstrated this skill?

Much as many visionary private or not-for-profit organizations are seeking to enter this market, outside of IT, none have the ability or credibility today to authenticate such credentials in a way that would be acceptable to a critical mass of employers, and hence students. One path might be to “translate” a student’s attainment for a given badge with the comparable achievement in a degree program. But only a university could pull this off. And given that doing so would undermine their core product, it seems unlikely that accredited colleges and universities will be willing to do anything remotely like this in a meaningful timeframe for unemployed workers. So badges are about as realistic a solution as 10 million more degrees.

We expect one innovation over the next few years to come from within higher education and to help lay the path for alternative credentials. Not coincidentally, this innovation has the potential to help clear the clogged employment market, at least to some extent.

While many employers today request college transcripts, particularly for entry-level positions, transcripts are used for degree verification, not as indicative of competencies or skills that may or may not match the employer’s needs. This is because transcripts are opaque to employers. No HR or hiring manager is equipped to decipher a particular transcript from a particular institution. No employer is able to forecast from a student’s transcript his or her likely job performance, in part or in aggregate.

This is an inefficiency that the digital revolution will solve. And it will be solved first through the “double-click degree” – a transcript that an employer can “double click” on to learn a lot more about the course and the student’s performance. Some double-click degrees may go as far as to unpack the course performance into discrete skills or competencies. But they needn’t go that far in order to transform an opaque credential into a tool through which very productive dialogue between employer and prospective employee can occur. This improved information has the potential to result in better matches between employers and prospective employees, and fill some of the 3.7M unfilled jobs.

The emergence of the double-click degree holds both promise and peril for colleges and universities. Promise insofar as students, families and policy makers will become increasingly aware of the very tangible value of a degree from an accredited institution of higher learning. Peril in that once the double-click degree becomes common, alternative and emerging credentials have a better chance of competing on a level playing field. No longer will it be the monolithic bachelor’s degree from a 200- year-old university vs. the badge from a Silicon Valley startup. Students, families, employers and policy makers may well compare curricula, concepts, skills and competencies, and then opt for the credential with the best return.

In the absence of another $40B to boost degree completion, the Obama Administration would do well to nudge higher education along in this direction.