Who Owns The Competency?

Freshman year marked my first experience with the issue of privacy in higher education. It wasn’t the typical “roommate hangs sign on door to warn he’s in there with a girl”; that didn’t happen until sophomore year. It involved something much simpler. (On my floor, the simplest things were often most perilous. Like sleeping. One roommate enjoyed hiding under beds for hours, waiting for someone to go to sleep. Then, just as you’d be nodding off, he’d reach up and grab your leg, causing panic and injury.)

In this case, the simple act was attempting to take a shower. I turned on the water, took off my glasses and hopped in the shower. Without my glasses I’m fairly blind. So as I was washing my hair, I didn’t notice that my roommate Chris had decided to hop in the shower with me. He claims he was in the stall with me for well over a minute before he decided to get my attention with: “Hey, can you pass the soap?” It’s likely that everyone in Welch Hall that evening heard my reaction: “AAAARGH. GET OUT! WHAT ARE YOU DOING?!? GET OUT!”

Since then, I’ve learned a lot more about privacy in higher education. So in April when LinkedIn CEO Jeff Weiner said his goal was to have a profile for every member of the global workforce and a profile of every job and every skill required to obtain those jobs, and a profile of every educational institution and program, I knew enough to forecast a privacy storm.

LinkedIn is building what I call a competency marketplace. The core of the competency marketplace is, as Weiner says, profiles – profiles of people, of jobs and of learning experiences. The point is to match one to the other on the basis of competencies – a more useful means of exchange than the current labor market currency (i.e., degrees – as portable and useful a currency as the giant stone coins used on the Island of Yap). So your profile could include your resume, your credentials and transcripts, and the results of standardized tests you’ve taken over the course of your life (SAT, ACT, GRE, LSAT).

As with your Facebook profile, there’s no question who owns all this data: you do, although depending on your privacy settings, you may be granting Facebook “a non-exclusive, transferable… royalty-free, worldwide license” to use your photos, videos and other content. But Facebook doesn’t care too much about the actual content you post. Facebook extracts value from analyzing your content and attaching metadata to your profile, particularly metadata concerning your demographic group and consumption patterns, so ads can be targeted more effectively.

This will matter a great deal. Whereas Facebook’s privacy question relates to one large revenue stream (advertising), competency marketplaces will pursue any and all of the following revenue streams with the metadata produced from your profile:

Each of these is a potential revenue stream for competency marketplaces, either from the employer or the education provider. There’s a great deal of money to be made here, but it hinges on the very real question of ownership of the competency. The coming privacy wars over your competency profile will make the current Facebook battles look quaint.

In my VentureBeat article referenced above, I discuss how Uber has positioned its online marketplace between consumers and the supply chain of drivers and cars, changed consumer behavior and disrupted the supply chain. In his Wall Street Journal column last week, Christopher Mims explored the extent of this disruption: “Uber sets the prices that its drivers must accept, and has lately been in the habit of unilaterally squeezing drivers in two ways, both by lowering the rates drivers are paid per trip and increasing Uber’s cut of those wages.” Mims says that while, according to Uber’s own research, its drivers average $17 per hour, this doesn’t include expenses, which probably reduce the net to around $10 per hour. Concludes Mims: “What this all means is simple: Uber and its kin Lyft, which is more generous with its drivers but has a similar business model, are remarkably efficient machines for producing near minimum-wage jobs. Uber isn’t the Uber for rides—it’s the Uber for low-wage jobs.”

If competency marketplaces have anything like the effect on educational providers that Uber has on drivers, then the question of ownership of the (algorithm-derived) competency isn’t academic at all. If ownership is held by the competency marketplace, we may find ourselves in a world where there’s more money to be made from owning the competency profile than from delivering postsecondary education. This means a significant diminution not only in the role of faculty, but also universities themselves.

To avoid marginalization, institutions need to insist on individual ownership of competencies. Ensuring ownership lies with the individual could make the competency profile portable and facilitate movement across marketplaces, as well as to universities themselves. In an era of unbundling, where universities need to move from selling the educational equivalent of enterprise software to SaaS subscriptions, the winners will be those that can turn their students into “students for life” – providing the right educational programs and experiences at the right time. This becomes possible when students own their competencies and allow their institutions to manage their profiles, suggesting educational programs and even employment. But if competency marketplaces are deemed to own algorithm-derived competencies, then the likelihood of many university winners emerging in a higher education sector disrupted by competency marketplaces is about as high as the probability that I’d pass you the soap if you got in the shower with me.

Thanks to Allison Williams for her assistance with this Letter.

USA Today coverage of New America Foundation report on state universities’ shift from need-based financial aid to merit-based aid, providing relatively greater access to wealthier families, and New York Times article on NCES Education Longitudinal Study demonstrating that the graduation gap between rich and poor is even wider than the enrollment gap. USA Today
Public colleges and universities [are adopting] the enrollment tactics of their private-college counterparts… For many of these schools, that has meant using their institutional aid dollars strategically in order to lure affluent out-of-state students to their campuses in order to climb up the rankings and increase their revenue. As a result, fewer institutional aid dollars are available to in-state students who come from less privileged backgrounds. Read more

New York Times
Among the participants from the most disadvantaged families, just 14 percent had earned a bachelor’s degree…. Among those from the most advantaged families, 60 percent had earned a bachelor’s… Here’s another startling comparison: A poor teenager with top scores and a rich teenager with mediocre scores are equally likely to graduate with a bachelor’s degree. In both groups, 41 percent receive a degree by their late 20s. Read more Fortune coverage of $65M of new financing for Udemy, the marketplace of more than 22,000 not-for-credit online courses from educators like Jimmy Naraine: Unlike Udacity and others, Udemy isn’t too focused on providing alternatives to traditional degrees. While it does provide certificates for completing certain courses, it’s steering clear from diving into the education degree pool and having to deal with accreditation bodies and other regulations. “We find that the value of formal degrees is going down,” [CEO Dennis] Yang said. Read more Inside Higher Education article on University Ventures investment in Ponce Health Sciences University to address the acute shortage of Hispanic physicians: Ponce Health Sciences University in Puerto Rico and University Ventures… are partnering to train more bilingual and bicultural physicians. The goal of the partnership is to increase the number of graduates from the Ponce program who move on to medical residency programs. Ponce is the first and only for-profit medical school in the U.S. with Liaison Committee on Medical Education accreditation. LCME is affiliated with the American Medical Association. Read more 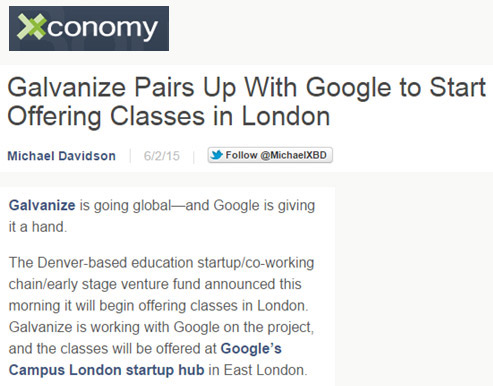