One of the unlikeliest stars of the Internet is Tom Dickson, the nerdy founder of Blendtec who conceived, produced and stars in the series of online videos called “Will It Blend?” The conceit is that the Blendtec Total Blender is so powerful it blends anything. So Dickson starts each video with an item that isn’t typically blended, provides a reason why he needs to pulverize the item, and asks: “Will It Blend? That is the question.” With only a few exceptions, the Blendtec total blender is successful at reducing the item to liquid, powder and/or smoke. 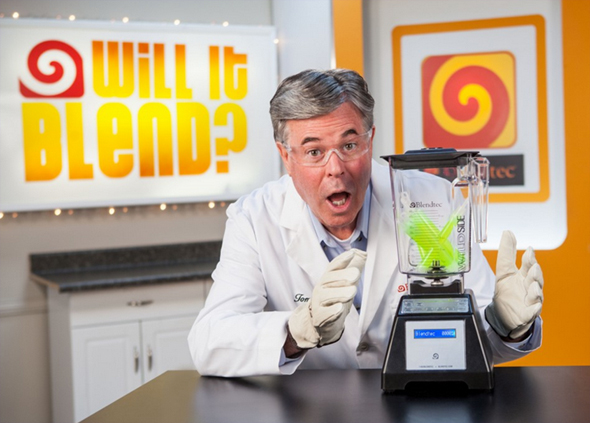 Although “Will It Blend?” has been around for a while, it was recently discovered by my 8-year-old son after he figured out how to disable the YouTube filter on our home computer. Now, as it appeals to the proclivities of all three boys (8, 5 and 3), “Will It Blend?” is the preferred form of entertainment in our house.

I’ve surveyed the kids, and their favorite episodes are:

At this point, a promise of a few episodes of “Will It Blend?” is one of the few effective tools in my parental arsenal to get the boys to stop behaving like wild animals for a few minutes so we can get something useful done, like bath or bed.

Last week, during an episode in which Dickson tried to blend a rake handle, I began thinking of the Blendtec Total Blender as a useful paradigm for higher education. Clearly, Dickson has built a better blender. I’m no expert, but any device that can blend a bag of marbles must be better than the competition; my kitchen blender has trouble with pancake batter. But the key isn’t that he’s made a better product. Instead, the product is so much better that it enables a viral, low-cost marketing and distribution strategy that allows the product to achieve scale relatively quickly: With over 300M online views, the “Will It Blend?” series increased Blendtec sales over 700%.

So as we think about major market needs that higher education institutions aren’t currently meeting and evaluate potential solutions, it’s useful to ask a question so simple it appeals to an oft-confused 3-year-old: “Will It Blend?”

Free Community College
Tennessee Governor Bill Haslam has proposed making community colleges free for all students. Not surprisingly, in an era of state defunding of higher education, the idea has received rave reviews from higher education lobbyists at One Dupont Circle.

But as most Tennessee community college students are eligible for Pell Grants, the net cost is already zero. Indeed, Governor Haslam acknowledges the proposal is largely a marketing tactic: “It is more affordable than most people think, but if they don’t know that, that doesn’t help us. If we can go to people and say, ‘This is totally free,’ that gets their attention.”

There’s no question that “free” could be as appealing from a marketing standpoint as blending a Justin Bieber action figure, along with his CDs, movie and his extensive and compelling autobiography. But given that 71% of matriculating students at Tennessee community colleges require remediation and the completion rate of students is less than 20% (and less than 10% for minority students), turbo charging the marketing for this product is equivalent to attempting a viral marketing campaign for my pancake batter-challenged blender; the product needs to work better first. Trying to increase the throughput for a system with these outcomes is not a productive use of state resources.

MOOCs (Massive Open Online Courses)
I stopped picking on MOOCs six months ago when it became clear that saying anything further would be gloating. This was before it was revealed that course completion rates were less than 5%, 80% of enrolled “students” already had degrees, and that overall traffic to MOOCs was falling despite rapidly increasing course offerings. But in terms of college affordability, the nail in the MOOC coffin seems to be the fact that for the universities that have announced they will award credits toward a degree for completed MOOCs (e.g., Colorado State, University of Maryland University College), media reports indicate that not one student has taken advantage of this new “affordable path” to a degree.

As with “free community college,” MOOCs are a classic example of putting the viral marketing campaign before the blender. While MOOCs received plenty of attention in 2012 and 2013, they’re more smoke and mirrors than blender.

2) Shrinking the Skills Gap
In his State of the Union address, President Obama urged community colleges to work with employers to offer “more apprenticeships that set a young worker on an upward trajectory for life.”

At a high level, the idea is undoubtedly appealing: there are 3.4M unfilled jobs in the U.S. Clearly community colleges could do a better of job of aligning their programs to labor market needs and train workers that employers will hire. In fact, it’s so appealing it’s a theme this Administration has returned to again and again. In the spring of 2012, President Obama proposed an $8B community college-to-career fund to train 2 million people for “high-growth jobs.” And according to media reports, the President’s 2015 budget request expected next week will include billions for new job training programs and apprenticeships.

So although few details have been offered for this plan, you can bet dollars to donuts that if and when the rubber hits the road, the program will be “handcrafted” i.e., one or two community colleges paired with a handful of employers, funded by a combination of federal and foundation sources.

What does success look like for these bespoke partnerships between community colleges and employers? Maybe a few hundred jobs filled? And then what? Perhaps the blender works, but it’s not a scalable solution. The program was handcrafted to begin with and there’s no built-in viral marketing that will cause any other community college to follow the same path.

The good news is that we are already seeing Blendtec Total Blender solutions for both these challenges.

On affordability, new competency-based degree programs from public universities (University of Wisconsin, the Texas Affordable Baccalaureate Program from South Texas College and Texas A&M at Commerce), not-for-profit universities (Southern New Hampshire, Brandman) and private sector institutions (UniversityNow) are providing degrees for $10k or less and are built to scale. The most successful ones – the institutions that will “go viral” – are likely to be those that price lowest and utilize that price point to tap innovative forms of distribution to get the word out to prospective students that the higher education cost curve has been broken.

On the skills gap, the best way to narrow the skills gap is to make a direct connection between an available job and a training opportunity. For example, when the Deepwater Horizon exploded in 2010 resulting in a massive oil spill in the Gulf of Mexico, the Louisiana Community and Technical College System launched a new HAZMAT training program that directly led to thousands of available short-term clean-up jobs. 8,000 students in the Louisiana System interrupted their programs of study to take this training and get the job.

As I’ve previously discussed, these connections are being made by emerging intermediaries or brokers. In these new models, a third-party (a foundation or a private company) acts as an intermediary between employers and higher education institutions and provides a job guarantee to prospective students at the front-end of the enrollment process. Unlike bespoke training arrangements, this model is scalable and perhaps even viral.

So while free community college, MOOCs and handcrafted apprenticeship programs continue to get the headlines, by asking “Will It Blend?” we see that they don’t.

On the other hand, for competency-based universities and emerging skills broker models, the answer to this seminal question is: 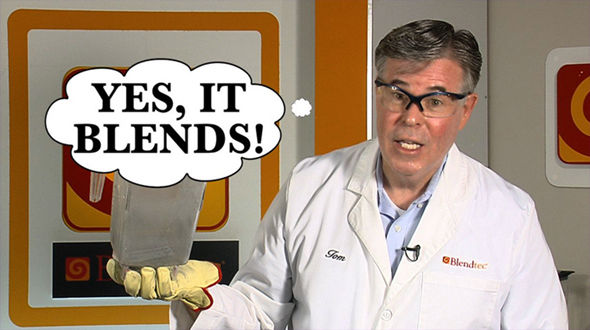